Journey of the Holy Maiden

Long ago, four gods created the world known as Istri. A planet filled with many sorts of life. Humans, monsters, demons, and ghosts. Throughout the years, humans have grown and evolved to tackle the hardships this world has given them, using different magic and weapons. They have built many civilizations and “conquered” most of the land. And one of the human’s most incredible inventions was an army. But not standard swords and shields…this army was comprised of well-trained and pure-bred soldiers. An army of all female warriors was created to protect all parts of the world from the horrors that the gods would create. These women were given the name Holy Maidens. And so our story begins….Bookmark here

I blocked an attack with my sword, but the creature’s attacks kept coming. This monster had the body of an octopus but the head of a distorted human. It had started terrorizing this village, going on a complete rampage. I and my squad have fending it off for the past hour or so. It was tough, but we had it surrounded and began to wear it down. One of my comrades Elora had sliced one of the creature's tentacles, making it scream in pain. Its cries sound like that of a human. It kept attacking, knocking back two of the other maidens. I rushed to go help them, knowing full well I was breaking formation. “Celeste, stop!” Nola shouted. “Celeste, you idiot! Don’t break formation!” Alcott added. But I still went to help them, giving the monster the perfect opening to make an escape. It bolted off, swiping my legs and making me fall to the ground. Elora, Nola, and Alcott ran after the creature, not even giving me a hand. I got up and watched Nola and Alcott create two glowing whips that they used to grab two of the monster’s tentacles. They managed to stop it, but it was strong enough to make the two struggle. Bookmark here

“Elora! Hurry up and kill the damn thing!” Alcott shouted. “Yes hurry! We can’t keep this up for long!” Nola said. Elora rushed past the two, reading her spear to attack. The monster roared at it and swung its tentacles around, but Elora was fast and swift enough to cut through each without struggle. She leaped into the air, lifting her spear ready to deliver the final blow. But, the monster turned its entire head around and opened its mouth….then shot out its needle-like tongue. “Elora!” I shouted as I gripped my sword and bolted to help. I ran to the side and burst into the air, slicing its tongue. But once I did, Elora stopped her attack and landed back on the ground. The creature finally escaped Alcott and Nola’s grip, pulling them both forward and landing on their faces. It escaped, wounded, but alive. The two got up, scratches on their faces. “What the hell happened?! Why didn’t you kill it?!” Alcott demanded. “I couldn’t.” Elora answered calmly. “Why?!” “Because Celeste got in the way. Making me lose my only opening.” The three looked at me. Elora and Nola with disappointment and Alcott with annoyance. I put my head down, “Uh…sorry.” I was going to be in huge trouble for this. 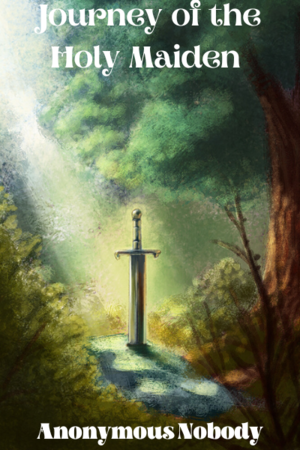 Journey of the Holy Maiden