The city of Nero is a metropolis that occupies 4,000 square kilometers, where the most popular corporations situate their headquarters. It was common to see endless screens of corporate advertising in the streets, filled with crowds of faceless consumers, blinded by the luminous lights, wandering like zombies.

Pacific Square was once the dominant commercial district that used to thrive. Demand for products and services had declined along with Laima Enterprises’ market share. Shareholders are irritated.

Amon Luceria was once the king and CEO of the company. He single-handedly raised the enterprise’s prestige and constantly reached peak sales for his empire. However, since his death, Laima Enterprises has never been the same.

A crimson luxury sedan, accompanied by twelve armored cars, was driving along the busiest highway in the Pacific Square district. Inside was the renowned CEO of Laima Enterprises, Amon Luceria.

He pensively sipped an expensive wine directly from the bottle, looking out the window with a blank expression; Laima Enterprises filled most billboards and screens, yet he felt nothing but exhaustion.

He worked tirelessly for decades to get his company where it was that day and wanted to retire and leave the business world behind to spend more time with his family.

His daughter Akari was about to graduate high school, and his son August had just started middle school. His wife Yuna had left the city for another man a year after August was born.

All Amon cared about at that moment was to re-establish his connection to his family to regain lost happiness. He had not directly seen them for five years. This was the first Christmas in a long time that he would spend with them.

He closed his eyes, blissfully imagining himself in the condo with his children.

Awoken from his fantasy, Amon gawked at the driver.

“I apologize for waking you, sir, but I’m receiving word from security that two truck-like vehicles are tailing us. Should I accelerate?”

“I already told you what to do if this situation ever occurred! Have one of our armored cars separate them from us. Don’t wake me again, or you’re fired! You don’t want your children to starve, do you?”

The driver choked on his saliva before swallowing in fear.

“No, sir, I again apologize for my rudeness. Please don’t get rid of me.”

Amon’s eyes stared bitterly at the back of the driver’s head.

“I really need this job, sir.”

“Shut the fuck up already!”

Amon pulled out a handgun and pushed the barrel against the back of the driver's head. The driver was frozen stiff but kept his eyes on the road.

A minute of silence later, Amon came to his senses and withdrew his gun.

“You almost lost your life for being insubordinate. Break my trust again, and I'll paint the snow with your blood!”

The driver did not respond. Amon could tell he was terrified. This brought him joy, he smiled.

Amon wanted to return to his fantasy, where he was with his beloved children. He was able to fall asleep even with the tense aura surrounding him.

However, he would never wake up again.

In the center of Pacific Square was the distinguished 910-meter skyscraper property, Luceria Condominium, the second tallest building in the entire city. After her last day in high school, Akari Luceria kicks down the door to her unit and exhales a loud shriek. “Finally, my life in high school is over!”

In the living room was her younger brother August. He ignores her as he plays his video game.

She wraps her arms around him like a snake and suplexes him into a couch.

“What are you doing?” In response, August scratches her leg like an upset cat. His attack dealt no damage.

“Don’t ignore me when I come home from school. You should know to greet your older sister better on her last day. M’kay?”

The massive 200-inch flat-screen turns pitch black. The only light emanating was the red text displaying YOU DIED.

“You idiot! I died because of you.” August cuddles up into a ball, concealing his face.

Akari picks up the controller. “How about I beat this stupid game for you? It can’t be that hard.”

August stomps Akari’s foot. “No! I wanted to beat it!”

“Just let me show you my skills in gaming while you sit there on the couch. I heard that father used to be a pro gamer when he was my age, so I’m sure I inherited his skills.” Akari starts a new game.

The sun had retired and Akari was still trying to beat the game.

She thought to herself,
What the fuck? This game is way too hard. I’ve died over a hundred times to different bosses!

She turns to her brother, who is sleeping soundly on the couch.

She pats his head,
Don’t worry, little one. I’ll beat this game for you no matter the cost!

Akari turns away from August with an ugly grin,
If I can’t, I’ll have the creator fired. After all, father does own his company.

Knowing she holds indirect power and can ruin a stranger's life simply because they annoy her fills her with joy.

Power was the main highlight of her life. From the start of her enrollment in school, no one dared to oppose the daughter of the owner of the world’s most powerful company.

She viewed herself as a goddess,
I’m prettier than Helen of Troy. That slut.

Akari reminisces about her time as a high schooler,
Ah, I’m going to miss high school. I'll just look for new puppets for my entertainment when I go to university.

She starts to giggle which transpires into laughter.

That’s it. I’ve had enough. I will have this stupid gaming company shut down, and the creator fired.

Akari reaches for her phone. Her weapon.

Suddenly, an almost blinding bright flicker appears from the window. A thunderous bang trembles everything inside. The power dies, and the room becomes pitch black, leaving the only light source to be the flames from the explosion, visible from miles away.

A massive explosion rumbled the streets and skyscrapers across Nero. The blast came from the highway, decimating surrounding areas turning them into rubble. 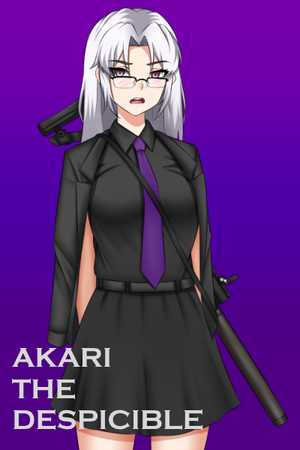