(On Hiatus After All) Mechanical Girl Una! / "Mekanikarugāru Una!"

"Come on everyone, we can't give up yet!"

"But that Falc is just too strong."

"Hoki's right Una, we should get away while we still can"

The girl 'Una' stood atop the small incline, a backdrop of the orange sunset behind her as she turned to face her friends.
They were all three battered and bruised, parts of their ornate and colourful armours blown away or discoloured.

Una rose one fist into the air, a double bladed staff gripped in her hand - Her brown eyes ablaze with passion, a grin spreading across her features;
"Run? And leave this innocent village to suffer the consequences for our losing? No way, never! We can still do this guys, I believe in us!"

The two she addressed, a young man and woman dressed in the same flowing armour, looked to one another with a sigh before nodding and making their way up the hill to stand alongside their brave friend.

"It's crazy this ya know." The young man said.

Una smiled at her three companions, before turning her attentions back to the sight before them.
Hovering in the air was a woman with long flowing blond hair - A menagerie of floating mechanical tentacles spreading out from her and a large hexagonal mask covering her face.
Beneath her on the far side of the incline was a small settlement, houses on fire while families desperately tried to escape.

Una held one of her staff's points out towards the floating woman - "You've gone too far this time Falc! With the power of our hearts and our bonds we shall stop you!"

With that Una's staff began to glow a lime green shade.
The trio besides her followed suit, raising weapons of their own, each glowing a different shade before all four emitted streams of glowing energy.

The woman called Falc, flinched in surprise at the combined force of the beams collided with a translucent shield in-front of her - A mechanical voice echoed out from behind her mask.

"Nice try you children, but not enough!"
The snake-like mechanical arms rose up from behind the shield and began firing back reams of dark green lines - The bombardment landed all around Una and her friends, causing the ground around them to erupted in a series of explosions, while any shots that hit them drew faint lines of blood.

"Keep going everyone, just a little more!" Una yelled over the raucous noise of it all, a cut forming on her cheek as she spoke, a gash spreading across her leg.


"Ha, looks like you idiots need saving, again!"
Out of nowhere a fifth person landed beside Una and her group - A fiery woman with deep Crimson hair and intricate mechanical wings on a thick suit of armour - She drew a heavy looking great-sword from her side and held it forward in a similar motion to the others.

"The 'Scarlet Stranger'! You've come to help again just in time!" The young woman called Hoki exclaimed.
This so called stranger grinned wolfishly before rectangular capsules on her shoulder pads flipped open and a swarm of tubular missiles launched out, joining the energy attacks of the others and forging a path into the enemy's strange shield.

An explosion erupted from the combined power of the attacks - The villain raising her hands to cover her face from the resulting blast;
"Curse you children, you have won today but not next time." She hissed from behind the mask.

In a blue flash of light the mechanical armed woman disappeared from sight and soon after the five on the hilltop seized their assault.

A little while later the sleepy sunset village returned to silence - The team quickly went about putting out the fires and helping the injured villagers.
Once it was clear there was no more immediate danger, the Scarlet Stranger kissed the older man dressed in grey on the cheek (much to his chagrin) before disappearing into the night, as was her usual custom.

The four left stood in a circle, celebrating their hard-won victory, when a villager approached, his ruffled hat held in his hand.
With a bow he asked; "Oh great strangers, I thank you for saving our humble village, but why I must ask would you risk so much for us?"

Una was the one to step forward and smile, her green and blue frilly dress blowing gently in the evening breeze - "Don't be silly, everyone deserves help now and then, that's our job. We three--"

"Humph, four." Coughed the voice of the older man.

"Oh ya, we four and that other woman, so five I guess, and Nemo too - Well anyway, we are the Mechanical Warriors! We have sworn a pledge to free the Scared Maidens and return Bhaile to a land of peace once more!!"

"Yup, I'm mechanical girl Hoki." 'Hoki' said back to the man as she stepped forward, offering the villager a handshake.

"Ya well, name's Sabban, 2nd-Gen mechanical warrior - And the old dude here is just a hanger-on" 'Sabban' said pointing flippantly towards the 'old dude'.
Before said older individual could voice his complaint at this description, Una piped up once more;
"And I'm the leader, Mechanical Girl Una at your service!!" 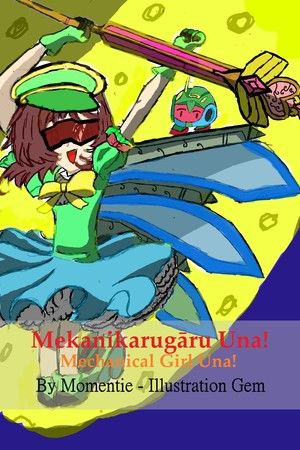 (On Hiatus After All) Mechanical Girl Una! / "Mekanikarugāru Una!"