It was late at night in Tsukikawa City. 19 year old Simon Kai was looking up from the window in his bedroom with a cup of tea. The night sky was glittering with stars and one shot across the sky. It was so beautiful and his eyes glowed from it. He decided to make a wish. “I wish to meet someone…” he whispered to himself. The thing with Simon is that he only had a thing for men, especially for his schoolmate named James Tagawa. He is a 20 year old Junior who happens to be very kind towards him. Even the little gestures James did for Simon made his heart flutter with joy. He thought it was just a silly crush but it was really something a lot more than that. He didn’t think too much about it and got himself tucked in for bed.

As he dozed off for a goodnight’s sleep, he had a strange dream that he couldn’t wrap his head around. It looked like he was in a kaleidoscope, colors changing all around him before he saw a mysterious red figure with devil horns and a tail. Simon was confused but saw the figure was walking away. “H-hey, come back!” he said as he was following it. The figure led him to what looked like an abyss.

Was it a trap? He didn’t know until there was a bright blue light shining. A wand appeared right in front of him and he took it. He held the beautiful item, examining it before it was glowing. Simon woke up to the sound of his alarm going off. “God dammit…” he sighed. He wanted to know who that mysterious figure was and why he was given a wand.

What was even more shocking was that the wand from his dream was right next to him. “Huh?!” The boy jumped back in shock as it was right there. Every detail is exactly the same as in his dream. “This is so weird…” He looked around until he looked at his clock. It was time to get ready for school and get some breakfast. He decided to let it go, but he had a gut instinct to take the wand with him in his school bag. What he didn’t know was that he’ll need it later.

After a light breakfast and getting his uniform on, he was on his way to school. He still kept thinking about that strange dream and how the wand suddenly appeared. “This must mean something…but what?” the boy thought to himself.

He decided to let it go for now as he entered the school building. There he sees his crush, James Tagawa. He blushed seeing him. Tall, with such clear, fair skin, soft burgundy hair, and beautiful ruby eyes. He was everything he dreamed of and more. The taller man gave a gentle smile to him. Butterflies fluttered around in Simon’s stomach, but he shook the thoughts out of his head before heading to class.

It seemed like a normal day, nothing too out of the ordinary…besides the obvious. His gut, however, was telling him to keep a lookout. He wondered why but something weird was going to happen.

That was when the lights started to flicker. At first the whole class, including the teacher, was confused as to why it was doing that. Before the lights turn off completely. There was slight panic before everyone went silent and the lights turned on. Simon jumped back to see that the teacher’s eyes were purple with spirals. In fact…everyone, but him, was having that happen.

“Huh? Teacher? W-what’s going on?” Not a single response came out of the teacher’s mouth. Simon stood up and his gut told him to get out of there. Now. He didn’t second guess the feeling as he fled. At the end of the hall was that devil horned man from his dream. He was wearing an eye mask to hide his identity. Simon gasped, “It’s you!”

The man smirked before walking away. “Oh no you don’t, get back here!” Simon ran after him before the devil horned man picked up the pace. Soon the man teleported away, catching Simon off guard. “What in the–? Now I know I’m not imagining things…”

Obviously because classes are in session, there was no one in the hallway. But it was quiet…too quiet. He couldn’t even hear teachers from other classrooms giving lessons. Plus there was a weird vibe that he didn’t like at all.

“I wish I knew what to do…” Those were the exact words he needed to say before a bright, blue light appeared in front of him. Simon shielded his eyes before he saw a cute fluffy white and blue fairy in front of him. “Hello, Simon Kai. I am your fairy, Sweet. I’m sorry to surprise you like this but you need to go after that man,” the little magical being said.

“Huh? How do you know my name? A-and is he the one who’s making this happen?” There were so many questions the man could ask the fairy but there wasn’t much time. “I’ll explain later, but yes he is the one doing this. Also you’ll need this.” Sweet closed his eyes before the wand appeared in front of him. Probably with magic the little fairy had, he made the wand teleport to him from his bag.

Simon closed his eyes, concentrating before a blue aura surrounded him and he raised his wand up in the air. “Azure hearts love protection!” Everything around him turned blue, his hair became blue, he had this cutesy magical boy outfit that was blue, and the wand was put into a little pouch connected to his belt. “I protect those who dream of what their heart desires, Love Protector Azure!”

“Finally you have transformed!” the little fairy said excitedly. Azure was surprised to see his new form. He looked at himself in the glass of the headmaster’s office, those inside also hypnotized. “Whoa…this is freaky!”

“It may be but we need to stop that man. Let’s go,” Sweet said, flying towards the exit. At first Azure was hesitant but he knew now this was serious, so he followed the little fairy. 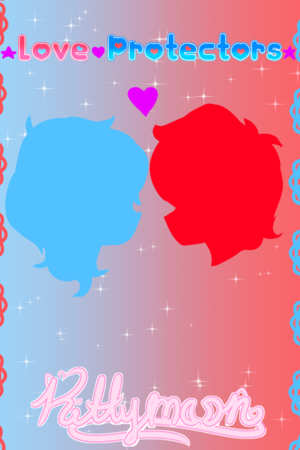