I Got Kicked Out of White Palace Because My Horse Wanted an Apple During My Jousting Match [Pt.1]

Mr.Knight, Why Can't You Stand Straight?

If Arthur Pentaghast, prince and renown handsome knight of Chancealot Kingdom in the Western Isles, could swing a longsword at his current moment, he would use it to chop off the head of his stupid horse.

Once again, his white stallion's antics had caused a blunder that saw him lose face before his parent. And this time it was worse, in front of the public during his jousting match with that prideful Sir. Smithers! Oh, the shame!

"Chifton, that stupid horse!" he grumbled and gritted his teeth, thinking about all the tasty recipes the palace chefs could make out of horse meat.

His mind stewed over his match disqualification as he whiled away the time in the White Palace Dungeons.

He was stuck in one of the high-class cells on the dungeon's top floor, of course. So high-class, he had a bed with pillows and blankets, a fruit platter on the table and a reading chair with a back catalog of his favorite story. Like he could survive on cheese, crackers and grapes alone.

He sat seething in the padded red reading chair. A portrait of a prince, brooding over his misfortune in lock-up.

If an artist were to paint Arthur's picture, he supposed the features list would be as follows: a man of regal airs, seated with an imposing posture of crossed long legs in black and gold trimmed trousers tucked into black boots.

Yet, a man downplaying his position by wearing a simple (still posh looking) navy and silver lined tunic held together by a belt.

Silky, short blond (not hacked-cut, but clean-cut) hair combed off his squarish and well-balanced face, which was clean and almost blemish-free. A pair of narrow blue eyes, a shapely nose, and a cocky pair of lips to send women's hearts soaring with, 'Give me!' His most charming features, or so people had said.

Either way, he was a handsome enough picture of man to outshine most others in the palace. Although, being locked up in a cell right now wasn't doing wonders for his hair's lustre.

"Prison lock-up is harsh." He grumbled complaints to himself.

Soon his mind was replaying the unsavory moment of his match.

He had been in perfect form, with the right lean and charge to carry the long lance at the optimal angle for Sir. Smither's breastplate.

Arthur (in full metal steel armor) and Chifton (in his steel barding) were racing forward with a surefire blow; feeling fired up by the crowd's ecstatic cheers. Until his direction had unexpectedly changed for the stadium's opened exit.

The reason? Chifton had caught a whiff of a kid's candy apple and made a go for it.

Their charge went right out the stadium exits with leaps and bounds; kicking up mad dust and bowling patrons aside. They rushed blindly for the smell's source on the side of the marketplace road.

Arthur was in a tight position, so unable to rein in the horse, given that one arm was balancing an oversize iron lance at twice their length. All he could do was scream out his apology and curse his horse with many foul threats to make the beast stop.

Chagrin had contorted his expression when Chifton skidded to a halt before a booth selling candy apples and peanuts.

Arthur's lance had jousted the bag attached to the poor man, who had bought a packet of peanuts. The force of the lance had sent the man flying into the air as he had turned to leave with his nuts.

Arthur could only sit on his horse and stare at the dirt road where the man had landed; nuts strewn around him. He was glad his face had been behind his helmet to mask his horrified expression.

He was able to pull back his schlong lance, so it wasn't a public health hazard. Many commoners had crowded around him, Chifton and the knocked over man with his butt in the air.

As a good and well meaning knight, he immediately got off the horse to check on the man's condition. Luckily, the man had only suffered a few grazes. Unluckily, for Arthur, he was naturally roped into owing the man a favor.

"Stupid Chifton." He gritted his teeth and grumbled again.

Keys rattling against his cell door pulled his attention back to his current situation.

"Right. His Majesty said to let you out now." A guard yawned as he opened the door wide. "He would like to see you in the throne room."

Arthur thanked the guard in full metal armor, bearing the palace's white lily crest on his breastplate, and stepped out of the opened iron door.

The guard's boots scuffed the ground as he dragged himself back to his guard post. Arthur climbed the dungeon stairs to the palace grounds. 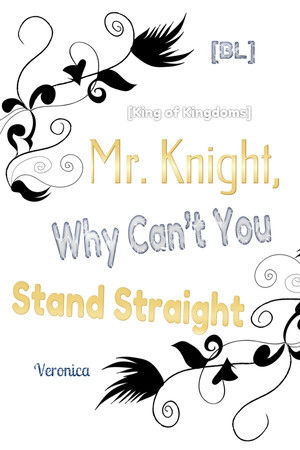 Mr.Knight, Why Can't You Stand Straight?