'Welcome to East Berlin! ' reads the neon sign.
Quiet, deserted streets. Large skyscrapers tower menacingly over the busy and bustling financial district, the only semblance of life in this somewhat dystopian and otherwise dead city. Actually, that was what East Berlin was known as ever since the Russians had gone back into the city. Because beneath the veneer of skyscrapers and neon lights, laid exactly that. A dead city. The Soviet crackdown on the city was pretty well publicized and heightened tensions between East and West almost to a boiling point. "It was like 1945 all over again!" one newspaper infamously wrote to the West.

"Ugh, did you see what those pricks did?" says one of the officers, taking out a cigarette and offering it to the other officer. "Another propaganda balloon. Went straight above the red light district."

The officer takes the cigarette. "What did the balloon say?"

"At least one half of Berlin can afford the materials to make this balloon."

The other officer scoffs. "And they wonder why half the world hates them?" The officer's radio starts going berserk.

"I swear if we were to just tear down that wall, they wouldn't be so confident anymore. They'd be scared straight." The second officer sighs. "If we tore down the wall, half our population would leave though."

"Should I answer?" asks the second officer.

The first officer sighs and nods his head. "We'll be in shit with Tapanov if we don't."

The second officer grabs the radio and presses a button, allowing transmissions to come through. "Mikael! Hans! They're heading your way! Americans!" yells an officer into the radio. The officer's eyes widen.

Seven. No. Eight East Berlin police cars chase after the car. Their sirens blare out in a violent and deafening display of sound.

We turn to the single car which, inside, has: Two men, two women and a young boy. In the back, one of the men has a gunshot wound, while a woman and the young boy attend to his injuries.

"He's bleeding out man!" screamed Aidan Rotostovsky, the young 15 year old boy in the back who had his head in his hands, utterly terrified, almost as if he's counting down how many seconds he has left to live.

"Apply some pressure on it!" cried Charlotte Smith, a CIA agent and the woman in the front-seat currently clutching a pistol in her hands. Next to her, in the driver's seat is William Turner, your typical CIA agent. "Aidan hold them off!" he says with a wide grin on his face as he frantically checks the rear-view mirrors.

"How the hell must I do that?!" Aidan replied, looking around. "For Christ's sake, there's an AK on the floor!" Aidan looks at it and vehemently shakes his head. "Screw you! I am NOT grabbing that!"

Charlotte looks at William with a stunned face. "Are you insane?! You can't make him carry that AK! That thing is practically half his size!"

Things are getting worse in the back. Blood spurts out from the man as Haley Acker, a receptionist that really shouldn't be here right now, tries to apply pressure. "Uh guys, the bleeding's not stopping!"

She slaps him hard across the face. "S-snap out of it! You're gonna make it!"

The sirens get louder. "They're catching up!" says Aidan, breathing increasing rapidly.  A heart attack just a few seconds away it seems.

"Are you insane?!" replies Aidan, hesitantly looking towards the AK and considering it.

Then...East Berlin cops and Stasi officers begin peaking out of their cars and start firing at the car.

"How you doing back there Tim?" asks William as a hail of gunshots bang against the car.

"All apart of the experience buddy. Say when we get back home, you still owe me that video game, alright?"

Charlotte interjects, "He has a fucking gunshot wound! Is this seriously the time to be talking about video games?" "Charlotte, there is never a wrong time when talking about Elden Ring."

Once again, a volley of bullets from the East Berlin cops' rifles strike against the car.

Charlotte peaks out of the car, with her pistol, and fires at the cops. A bullet ricochets off the side of a cop car and BAM. It strikes one of the cops right in the head, bringing the unrelenting gunfire to a sudden halt.

"Shit! I can't do anything at this range with this damn pistol." Charlotte says, even though she just killed someone.

"Exactly, which is why Aidan needs to grab the AK!" says William.

"I am not grabbing the AK! I've never held a gun before in my life and now you want me to get into a shootout with cops?!"

"Grab it or we all die! Just think of it as a more realistic video game."

"Ah jeez." Aidan gives in and grabs the AK.

He gulps, breathes and then peaks his head out of the car.

If, for argument's sake, you were wondering how I, as a 15 year old, landed up here with these four idiots...it really wouldn't make much sense. Honestly I, myself, am still puzzling over how i got here. Is this just my fate? I usually don't believe in that type of bullshit, but it has to be right? After all, my grandfather was also in East Berlin when he died and It seems like I'm about to die too, at the hands of a German of all people. Considering I'm Russian, at least I'll be dying the same way many of my ancestors did. I'm still so young though. I haven't had my first kiss. Hell, I haven't even held hands with a girl before. It just feels so wasted. This life of mine. Nothing's happened. Shit, I'm doing it again, aren't I? Throwing a pity party for myself. I mean who honestly cares? If I've learnt anything from my short life in America, it's to not care. So why should I care anymore? Let's rewind to 26 hours ago... 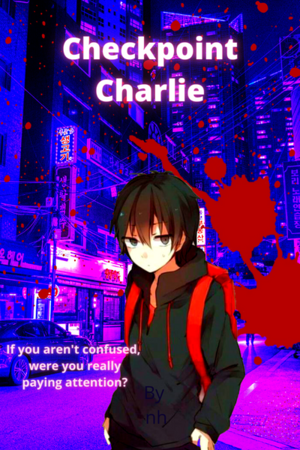