Thanks to Google, I managed to track down the locations of the herbs that Tsukishiro Fuyumi wanted. With the miracle of magic, I kept my smartphone connected to satellite feeds and used the map app and other spells imbued within my device to look for the necessary ingredients for whatever potion Fuyumi planned to concoct.

Fortunately, I didn’t run into any random demons in the forest. If this was a game or perhaps a cultivation story, I bet I would find the forest swarming with demons or villains. Instead, it was quite the boring quest. I could almost imagine Kazesenken complaining about the pacing being off, and this being a filler chapter.  Not that he would ever read my rambling, of course.

Might as well get this done and over with. At least I would earn Fuyumi’s approval and eventually complete Asmodeus’s mission. Speaking of which, even though I was getting closer to her, I had yet to learn the ultimate spell that he promised.

It could only mean one thing. This was just a superficial start to our relationship, and I hadn’t progressed to the level of “romance” necessary to unlock the spell. That was fine with me. I wasn’t naïve enough to be contented with what I currently had. Fuyumi herself, despite having a positive impression of me, hadn’t actually confirmed that she was in love with me. And I wasn’t delusional enough to think that she had truly fallen for me just because I rescued her that one time.

Perhaps it was just infatuation. Or maybe she was simply curious or intrigued by me. Affection didn’t necessarily mean that she had fallen in love with me. It could just be friendship. In which case, I would have to work harder to make her see me as a guy.

“This is the last one, right?”

Checking the photo of the mandrake herb that was displayed in my smartphone, I then knelt down to pull it out. Before I did, however, I made sure to freeze it with a basic ice spell. I didn’t want the human-shaped root to begin wailing and screaming the moment I yanked it out of the soil. Its whining was more lethal than even that of spoilt gamers screaming about balance.

Sticking the frozen mandrake in my bag after confirming that I had gotten the right herb – its baby-shaped face was coated in a layer of frost, and tendril-like appendages that hung on the sides of the roots resembled undergrown limbs – I then rose to my feet, dusted the soil off my pants and regarded my surroundings.

“That should be all of them.”

Sighing and stretching myself, I proceeded in the direction of the nearest town. It had taken a two hour-long train ride to get to this region, so it would be quite the journey back. Fortunately, as Fuyumi said, I had been excused from today’s classes (and their homework) because I had officially taken on her mission. I supposed Tenma High prioritized magic and witchcraft over mundane education.

Not gonna lie, though. I preferred sitting around in a classroom to performing all this back-breaking labor.

Making my way to the semi-crowded train station – the majority of the commuters getting ready to visit Tokyo for school, work or pleasure – I boarded a relatively empty carriage. As expected, there weren’t that many people in this town. I was about to look for a seat when I caught sight of a familiar figure.

“What’s that supposed to mean?”

Sitting across the aisle was none other than Aozaki Haruna herself. The blue-haired beauty was reclining in her seat, one leg resting on the other. When she caught sight of me, she narrowed her eyes.

“And what are you doing here?”

I nodded before pushing my glasses back up my nose when they began to slip. Then I raised an eyebrow.

“That’s right.” Haruna folded her arms, regarding me warily. “I was also on a mission. I wonder, though…is this a coincidence?”

Her tone was accusatory, but I paid her no attention. Instead, I made a show of adjusting the bag by my side.

“Fuyumi sent me a request, so I went to gather the herbs she wanted.”

“‘Fuyumi,’ huh?” Haruna eyed me. “I didn’t know you two were so close. Then again, I did see the two of you chatting yesterday morning, despite incurring Shirakawa-kun’s wrath.”

“Shirakawa has no right to be angry.”

“We’re agreed on that.” Haruna sighed and shook her head. “I’m not approving of what he’s doing to Tsukishiro-san. But I don’t approve of you either.”

I snorted, resisting the urge to tell her that I didn’t need her approval. No sense getting into a fight over something so trivial. I had more important things to do with my time.

As the train moved, the silence was slowly replaced by humming machinery and the rustling of wheels against tracks. The other passengers stayed quiet too, staring at their smartphones or taking the opportunity to catch a quick nap. I was about to nod off too, having spent the better part of the morning plucking herbs in a bug-infested forest.

If I hadn’t cast a defensive spell over myself, I probably would have suffered a few dozen mosquito bites. Whoever said they loved to be with nature probably hadn’t actually experienced being out in the actual wilderness most of the time. No, hiking trails didn’t count.

For a few seconds, I had a fleeting impression of a weird dream where I was fighting against bugs when I was suddenly jarred awake by a screech. The train juddered to an abrupt halt, the momentum almost throwing the passengers who were still standing off balance. Even those who were seated found themselves sliding forward, much to the dismay of the other commuters in front.

“Sorry,” I mumbled to the person next to me, shaking myself awake and hurriedly adjusting my glasses. By now, his anger was forgotten, replaced by curiosity as he and everyone else peered out of the windows to see what had caused the sudden stop.

I frowned when I saw the thick violet fog billowing outside of the train. That didn’t seem natural. Wasn’t fog normally white? Since when was it purple? Not only that, why would we have fog in midday, which was generally the hottest time of the day?

“This…” Haruna gasped, also staring outside with a horrified expression. I turned to her, catching her gaze. She shook her head once and beckoned me over. My enmity forgotten, I got off my seat and hurried over.

“Don’t you recognize this?”

“No, but I know the mist isn’t natural. Something’s not right here.” I paused, allowing her words to sink in. “Do you know what phenomenon this is?”

“That fog is demonic. The train is engulfed in an enchanted…spatial pocket. We can’t let the commuters disembark – if they do, they’ll get attacked by demons.”

That was just great. I suppressed a groan and glanced out the window once more.

“Is there a way to dispel the fog and return the train to the normal dimension?”

“…yes, but it involves us getting out there. It will be dangerous.” She watched me closely. I shrugged.

“I bet. Anything involving demons is dangerous.”

Especially Asmodeus. I didn’t know what his deal was, and why he wanted me to perform this mission for him, and that made him particularly dangerous. In some ways, he was more sinister than the mindless minor demons that attacked every human on sight.

“We need to find the demon that’s summoning this fog and drive it away. Then the train will return to the normal dimension.”

Haruna stared at me as if I was an idiot. “Do you think a demon capable of conjuring its own spatial dimension can be slain so easily?”

“I suppose not,” I conceded, though inwardly I was eager to test my skills against such a formidable foe. Personally, I believed that if I couldn’t even overcome such a demon, then there was nothing I could do to help master. Wherever he was right now.

“Wait!” Haruna brushed past me and hurried toward the door, where one of the passengers was trying to pry it open. “Please don’t do that! It’s dangerous outside! Could you all please remain in your seats? I’ll call for assistance. Until then, please wait patiently.”

“What’s this?” The middle-aged fella with dark hair turned to her with a glower. “Lady, do you know what’s going on?”

Haruna swallowed before nodding. She reached into her pocket to produce a badge that was issued by Tenma High.

“We’re from Tenma High. Um…we’re actually specially trained cadets with some experience in these matters. I ask that you all calm down for now and leave this to us.”

To my surprise, the commuters actually backed off and complied, whispering to each other. Their eyes had widened, and they appeared to recognize the badge. Speaking of which, I was issued an identical badge when I officially applied to take on Fuyumi’s request. Taking it out, I stared at the lightning bolt shaped logo that had stars trailing on either side. Now that I actually looked at it, I saw that there were the words Department of Occultic Occurrences labeled below.

…there was such a department? Oh, never mind. It was probably Tenma High’s way of covering up the fact that witches and warlocks existed.

“I’ll go check it out,” I told a flustered Haruna and proceeded to the door. Unlike the middle-aged man from earlier, I was able to open them easily and hop out. The guy watched me, his mouth wide open.

“Magic,” I replied truthfully and began to close the door. However, Haruna disembarked too, a determined expression on her face.

“I’m coming with you.” She nodded toward the swirling fog that surrounded the train. “You have no idea where to find the demon, right?”

“Actually, I have my ways…but yeah, I’d appreciate the backup.”

Smiling amicably, I slammed the doors shut and followed after her. As we moved down the length of the train, I felt a chill run down my spine.

Was it my imagination, or was there something watching us? 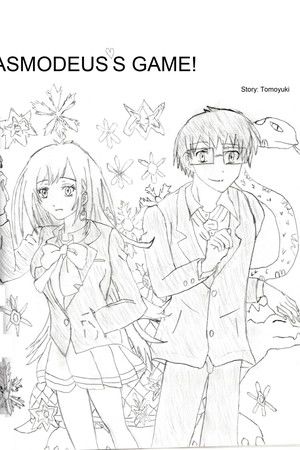