Warm blood trickled down his sleeve. It wasn't his, and that fact plunged his heart into a deep turmoil. His lips knocked against each other, slurring and stammering; Okabe failed to produce an utterance. Mortified, tears trickled from Okabe's eyes, muddying the concrete roof of Radio Kaikan with only his regret.

Those were the words of a man sobbing on the floor pathetically. After looping time and time again, the tendrils of fate had forced him into an impossible dilemma. Memories that no-one else had, Jamais-Vu from another plane of existence, and the mortifying dread that came with it---

Okabe's eyes clouded over, the irises of the man who could control the future had been clouded over with a matte gray glaze. He coughed out a wad of spit that had collected in his throat. And then a mind-boggling revelation breached his mind.

"Suzuha. I have a plan." Okabe whispered meekly, his voice oscillating weakly. "Shouichi Makise... That bastard... if only he wasn't there, maybe things would change!"

As he dragged himself up from the concrete sprawl, the corners of Okabe's mouth curled into a tight-lipped grin. "Yes... That's it! That's the key! But..."

"Okarin?" Mayuri spoke, a questioning gaze was directed at her childhood friend.

It was then that a terrifying glare was entrenched within the face of Okabe Rintaro. "Suzuha. Give me your pistol.", he whispered.

Suzuha Amane, who had previously been watching silently, hovered above Okabe with a look of impatience in her eyes. "And what good would that do?"

"It's the key...", Okabe rasped, his palms digging into the concrete roof, "The key to reaching Steins;Gate."

The seventh floor of Radio Kaikan, and the scene of the murder of Makise Kurisu just 10 minutes from now, that was the place that such a nefarious figure, the enemy of all mankind would forever change the course of history... Just thinking about it sent shivers down Okabe's spine.

Somberly, Okabe Rintaro paced down the stairs. Soft thuds echoed from the cold concrete steps, which resonated throughout the dull, grey corridor. He gripped the handrail tightly, an icy shroud circling throughout his chest. Harsh air rippled from his diaphragm, whispering to his lips as it parted from them, floating down, brushing past his sickly pale legs, onto his shoes that proliferated a blackness to his eyes like a void staring back.

The tension burrowed deep within his chest, and what could've been described as mere butterflies in his stomach swelled magnitudes into grotesque, mutated dragonflies thrumming around, poking at the walls of his heart, a bolt of pain electrifying his mind--

Death incarnate, a ravager of worlds.

As he reached the corridor of the main event, his feet bolted in place. That woman, Kurisu Makise, the woman he loved... this was sure to save her.

In Okabe's mind, he had already murdered the world several times over. Lukako's decrepit gaze upon learning that I could never love him... Tennouji's head splattering into a red mist, a haze of gore, a malaise of floating death... Nae entering Samsara, eternal time-loop torture to avenge her father dispatched at the hands of Hououin Kyouma--

Faris' father, murdered by Hououin Kyouma, Kiryu Moeka, sacrificed for the whims and convenience of Hououin Kyouma, discarded like garbage that baked in the sun. And a fate that converged on a nightmare - Mayuri's corpse appeared in his mind, no, not a corpse-- corpses. To satiate the repugnant greed of Hououin Kyouma, he had defiled Mayuri's life and existence, razed her future, stripped her of a peaceful death. He had pinned down her porcelain skin, her delicate shoulders, her fragile face, he had pinned her down, smashing her eyes into the pitiful, mortifying truth, over and over she had been exposed to her own death. Mutilation, dismemberment, stabbing, gushing chunks of coagulated blood frothing from the body of Mayuri Shiina, who remained plastered upon a pavement you could find anywhere, but not for Hououin Kyouma. Flying limbs, and a crimson tide painting the exterior of a bullet train, shifting the blame to a young girl who simply wanted to hug her lovely big-sister Mayuri. For Hououin Kyouma, it wasn't enough. Toying with the lives of others, bludgeoning the consequences of tampering with fate using the heads of the people close to him, and most of all, the kicker of it all, was that the person he loved, had tried so hard to save... Hououin Kyouma had killed her.

There was only one way to make this right. It was to kill the most evil and despicable man alive, and that man was Hououin Kyouma. If he could kill the man before his wicked inception, then...

A trail of blood slithered down Okabe's pale lips. Submerged in his thoughts, his teeth had clamped down harder than he anticipated. No matter. A taste of iron seeped over his tongue, causing him to wince in disgust.

Okabe Rintaro ran down the hallway, passing the storage cupboard. His conviction was to kill his past self, and at this point in time...

His phone displayed a strange flickering. It was inevitable, the man wouldn't know of its purpose until far, far later. He tucked his phone away in his pocket, the buzzing of static still filled his mind as he pondered the sender, an abomination of random characters that he couldn't even begin to decipher.

"Mayuri, what were you doing?"

The background noise was deafeningly silent.

"I messaged you right? I can't find my metal U-"

Mayuri Shiina's throat vacillated. Initially, only a scream of silence lingered in the air. Constricted, her irises jostled in place, her pupils constricted, her face jostled in place, the whites of her sclera reflected a deep red hue, a pattern of fractal crimson. Her childhood friend flopped over onto the floor, scraping his brains across each step, flailing down like a puppet with its strings cut. All Mayuri could do was watch as her mind was shattered, and it was only a fraction of a second later that her perception ceased entirely, the image of gunmetal gray, and a clean scarlet well through Okabe's skull that shouldn't be there, had sealed off her thoughts eternally.

And with that, the lives of Okabe Rintaro and Hououin Kyouma converged on death, and both ceased to exist. 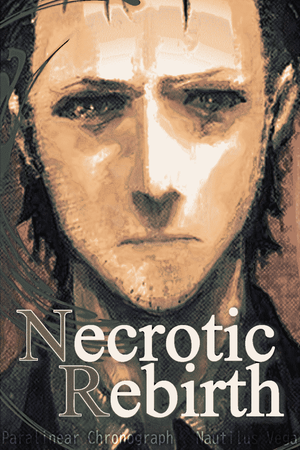