She took a deep breath, exhausting her lungs as she exhaled. Slowly making her way through the corridors of this unknown scenery, it’s as if she could hear a faint cry for help. Not as a sound, but an inner feeling. An essence of some sort, dragging her deeper and deeper inside. Fear trickled down her spine, her heartbeat stood still and her body began to fall numb. The surrounding walls around her began to vanish as the hallway fell deeper in to obscurity with each step she took. Then suddenly, the cries silenced. Bookmark here

A black, grim expanse painted her entire surroundings. The only light left was a lamp that hung above her head. Odd… she couldn’t remember seeing a lamp just moments before. It was a warm yellow hue; almost calming at first sight. Chiasa looked upon the light as if she was mesmerized by its enchanting glow. She stared at it to the point that her vision began to blur. She could feel the heat from the light burning at the back of her corneas. But for some reason, she wouldn’t turn away. There was a compelling force controlling her will; as if it wanted her to see something. Then suddenly the bulb blew, sending shattered glass splints through the air. Chiasa covered her eyes to shield herself from the flying shards. Darkness engulfed her. It blanketed over her entire body like a coward child hiding underneath the covers. But Chiasa wouldn’t find any peace of mind. Instead, she could feel its presence grab hold; clinging to the grips of her own fear. It felt alive.Bookmark here

As she opened her eyes, she could once again see the hallway ahead of her. There was a light coming from around the corner. Hesitantly, Chiasa stepped forward towards it. Cautious with every step, she gradually pulled herself closer and closer. Approaching the hallway intersection, a shadow wisped past. Frightened, Chiasa pounced backwards. Her voice had lodged itself inside her throat. She was suspended in a state of terror. She could feel it graze her body, slowly tickling its presence against her skin, and wrapping itself around her neck. Taunting her with death. Panting heavily, her heart began to beat out of her chest. She stood still for a moment, but she knew well enough that moving forward was her only option. Chiasa exhaled slowly. Her lips quivered and her knees rattled. She was fragile, as if her spirit had lifted itself from her body. The lightest gust of wind could tip her over. But at the very least, she was still in control. Bookmark here

Chiasa walked forward towards the intersection. The sound of cries slowly began to return step by step. As she turned the corner, standing ahead of her was a lady dressed in a tattered Japanese kimono crouched over crying. Chiasa tried to swallow her fear. She wouldn’t let it consume her again. The hallway began to get warmer by the second. The atmosphere grew ominous. Eventually, Chiasa could feel the heat climbing up the back of her neck. Whispering in her ear to look behind her. She tried not to listen, but it echoed through her like a foul vibration. The taunting wouldn’t stop. Without even a shred of freedom in sight, Chiasa gave in and slowly turned around. She nearly tumbled over at the sight of what appeared before her. It was the same woman again, but this time the two of them faced each other directly. Blood was stained across her tattered clothing. The hallway behind her burned in flames as the lady held her face in the palms of her hands; weeping. “Nande? …” the lady cried in a low voice as she held one hand out towards Chiasa. “Nande? …” The mysterious woman took a step forward reaching out towards her; Chiasa took a step back. Immediately her arm dropped and she slowly began to let her hand slip from her face. Beneath it revealed the grueling truth. Chiasa gasped as the sight unfolded before her. Bookmark here

The face of a battered Chiasa, repeating the words “Nande?”Bookmark here

Her body frozen stiff, Chiasa could no longer avoid the doppelgänger that crept towards her. She approached Chiasa and slowly ran her hand down her face, marking and defiling her. Leaving behind a trail of blood. She stared her in the eyes, Chiasa could feel the pain that filled them as she whispered the same word… “nande?” Chiasa looked at her in silence, far too afraid to speak. The lady yelled “NANDE” as she gripped her hands around Chiasa’s throat. She began to scream, then suddenly everything went dark.Bookmark here

As her vision returned, Chiasa found herself kneeling on the floor of an empty hallway, crying, and yelling “Nande.” She didn’t know why, but it was as if she could feel an overwhelming sense of hurt within herself, and all she could do was cry out and ask why. Tears dripped from her face into her blood smeared hands as she sat there unable to do anything. Bereft of all her strength.Bookmark here 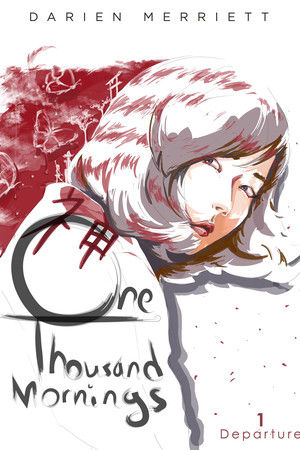