In a small town in North Seas called Little Town, a man named Pierre del Pierre lives. He is a carefree and happy-go-lucky type of man. He is currently at the age of 19 and he has a dream in mind.

"Hey, everyone! Listen to me closely!" He demanded the attention of the people passing through him in the middle of the shopping district.

"In five years, you'll see my name in the newspaper and I will be the "King of the world"! he declared.

"There he goes again."

"Yeah, he's been like that since 'those' people visited our town."

"Every day he says those words, when will he grow up?"

Those are the words that the people around him say every single day. He's been doing this for the past two years, saying that he'll be the King and will prove everyone wrong. Luckily, today is the day that he will say it for the last time as he has fulfilled his promise and is on his way to leave their small town.

"Yeah, you got that right, old pops. But unfortunately, this will be the last time you'll hear me declare those words. Next time you'll hear of me, it will be when I become the King of the World." he stated as he picked up his bag and threw it over his shoulders.

"You're really going, kid?" the old man who owned the orange stall asked him.

"You bet I am!" he gleefully responded.

"You sure you can handle life outside our small town?" the old lady of the meat stall asked him as she gave him a basket full of cured meat.

"I sure am! If I can't handle that much then how can I be a king, right? Also thanks for the meat every day, grandma!" he responded as he receives the basket.

At first glance, you'll think that the people around him see him as an annoyance by the way they initially responded to his declarations. Unbeknownst to others, they have been watching over him since he was a little kid as he runs around the street claiming that he'll be an important person in the world someday. Now that he had found that goal in life, this will be the last day they'll hear his voice before his departure.

"Are you alright, kiddo? The ship is about to sail. If you don't want to be stuck here for another month, you should get going now." the commander of the ship warned him.

"Well then, I should get going! Thank you for raising me here in this town! I promise that I'll fulfil my dreams!" he waved goodbye to the people of the town before he boarded the ship.

And just like that, the ship set sail. Within this ship, a young man, full of dreams and aspirations began his journey to be the King of the World. Unknown to this man, he is yet to make his first step from the starting line as his first trial approaches him quickly.

"I wonder what this journey will bring me? I can't wait to find out!" he stated.

Hey, if you're listening, I am starting my journey, father. I will carry your dreams with mine and be the King of the World.

He smiles as he looked over the setting sun.

Meanwhile, at the next stop of the ship, there are troubles waiting for the young man. 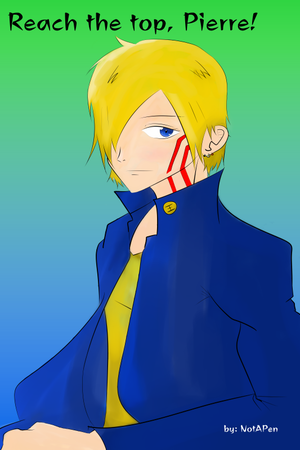