[AUTHOR’S NOTE: This novel is a sequel to one of my previous novels, and as such will contain unmarked spoilers. It is highly recommended that you finish reading Tales of Virtual Shopkeeper before reading this sequel.]

Have you ever watched an anime where the protagonist is playing a highly-advanced virtual-reality RPG? Isn’t it strange how there’s always one player in the hero’s group who has the role of a Shopkeeper? Haven’t you ever wondered who, in a world of endless possibilities, would ever choose to play the mundane role of a Shopkeeper? …That would be me, Yuu Watanabe. I get tons of customers with interesting tales to tell. The smiles on their faces as they tell me all about their latest quests and achievements is the greatest high in the world. And that is why I chose to be a Shopkeeper in Utopia Online. However, at this moment in time I was not sitting in my cozy little shop, nor was I listening to some hardened adventurer’s story of how they conquered Lord Tryhard the Mighty-ish. Instead, I found myself in one of Utopia’s many groggy forest areas looking for…

“A hat?” I asked, looking up from the bushes to stare at the short redhead.

“Not just any hat…” the girl smirked, puffing out her bikinied chest. “A witch’s hat. Think the sorting hat from Harry Potter, minus the transphobia probably.”

“Let me get this straight,” I sighed. “You dragged me out of my shop to search for some conical hat that may-or-may-not represent morals which I cannot condone?”

“Geez, Yuu. Why are you always so uptight?” The girl exhaled, placing her hands on her hips. “Sometimes, you gotta live a little, ya know?”

I knew that something was amiss when this discount gremlin said that she had an important mission for me. I suppose this is what I get for trusting a member of the Crimson Kings Guild. Still, a paying customer is a paying customer.

“So why can’t you just find this stupid hat yourself?”

“Mm?” The Crusader lifted up one of her hands and gave me an affectionate nose-boop. “It’s a scavenger hunt, dummy! And you’re the smartest person I know, Yuu-chan!”

“If I was a witch’s hat, where would I be?” the Crusader pondered aloud.

“You just said that this was a scavenger hunt, no? Aren’t there, like, any clues?”

“Of course! Why didn’t I think of that?” Rose retrieved a note from her inventory and handed it to me.

“Look for the square that’s not a square,” I read. “…Why are we in a forest, this clearly refers to the Town Square, right?”

“The Town Square is a circle,” I replied. “Anyone with even a basic familiarity with Utopia Online’s maps could figure that out. Unless they were a moron…”

“Hey! What are you implying here, mister?!” Rose pouted.

“Never mind that. Are we going to leave this dank forest now?”

As the humble Shopkeeper and the annoying Crusader arrived in town, we were greeted by an abnormal amount of players crowding the Square.

“They must be here for that stupid witch’s hat, too.”

“B-but how did they figure out that it was here?” Rose stammered.

“Because they’re not idiots?” I groaned, rolling my eyes.

Looking around, I spotted several familiar faces – Asami Usami, Aya Murphy and even Mrs. Tajiri herself (as if she didn’t know the location of a hidden item in her own game). Out of pure spite, I was half-tempted to abandon Rose and let someone else find the hat, but my pride (and also the incentive of a monetary reward) was too strong to ignore. As my bespectacled eyes continued to scan the area, I spotted something sticking out from underneath an anvil. Said anvil –which once housed the legendary blade Excalibur– has sat undisturbed in the Town Square, even after MIO-nee freed the legendary sword two years ago. I had often wondered why the devs hadn’t removed it after it had served its one sole purpose, but perhaps this was their plan all along? Walking over to the anvil, I reached down for what appeared to be a slip of paper peeking out from under the anvil like the protagonist of an ecchi series peeping into the girls’ locker room. Not that I’d know anything about that.

“Another note?” Rose asked, bouncing over to me.

“This looks like Princess Kaguya’s handwriting,” I observed. “Did Tajiri task the AI with hiding the hat? I guess she doesn’t know its location after all…”

The next clue is under your nose, but also under my favorite Shopkeeper’s butt~

My eye twitched as read the note. This was definitely the Princess’s handiwork. I’d have to remember to scold her later.

“She touched my pissing swivel chair.”

“My chair. My beautiful chair” I sobbed. This was one of my rare moments of weakness. It was such a shame that one of my archnemeses just-so-happened to be around to witness it.

“When did she have the chance to engrave your chair?” Rose asked.

“Bitch must have waited until I was offline,” I scowled.

Yuu Watanabe isn’t the only thing in the closet…

This latest clue in the scavenger hunt, etched into the seat of the swivel chair that I ‘borrowed’ from ~Schrödinger~, taunted me with its brazenness. Kaguya was way more snarky than an AI had any right to be.

Standing before me was an avatar that I didn’t recognize – A catgirl whose long and jagged green hair made her look like a walking Christmas tree. But rather than a star or an angel, her head was topped with a starry wizard hat – Likely the witch’s hat that Rose was paying me to retrieve for her.

Historically, my interactions with the Therianthrope Class didn’t tend to go well. I withdrew a cheap sword from my inventory, ready to fight this Kopi girl for the prized headwear. Her eyes gave myself and Rose_the_Deathbringer a quick once-over, presumably assessing her targets before attempting to land the finishing blow… Or at least, that’s what I would have assumed if she didn’t promptly remove the witch’s hat and chuck it at Rose.

“I don’t need it. Its Abilities are shit,” the Therianthrope huffed. “You can have it. Damn thing’s worthless anyway…”

And with that, Kopi made her exit, tail swaying side-to-side behind her, drawing my attention to her magnificent downstairs curves. As she left, she gave Rose and I a cheeky spank on the ass.

I found myself chuckling at the idiot’s flustered reaction. I, for one, wasn’t about to complain that a cute girl touched my avatar’s ass.

“That’ll be 300 Gold,” I said, turning to the crimson-faced Crusader.

“Nuh-uh,” she retorted, sticking her tongue out. “You didn’t do nothin’. It was the Christmas kitty-cat who found the hat.”

“Seriously?” I said. “But I was the one who solved all of the Princess’s riddles.”

Still brandishing the cheap sword, I lunged forward, swiping wildly in Rose’s direction. I felt no remorse whatsoever as the girl started to bawl her eyes out, running away with her metaphorical tail tucked between her literal legs. 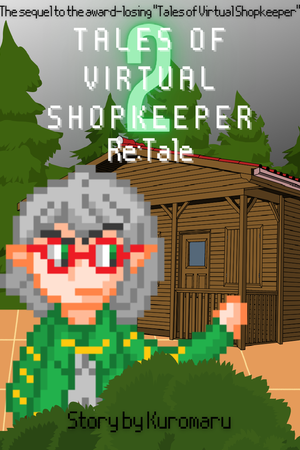