In a House in the City of Binoca: a woman screams as she seems to get smaller and smaller. It seems she gets sucked dry by an unknown force, it's dark and not easy to see what happens exactly but as the screams stop, we just have silence and the woman seems to be gone.

Later that night: the police arrive at the crime scene to find the sucked-out corpse on the ground, she seems to have no blood in her body and all that is left are the organs and her skin which seems to be dry as a bone.

The Police are clueless because they can´t find anything that helps to solve the case, so they look out of the window, where the woman was standing before and all they can see, is Castle Binocul and the Moon that shines upon it. The policemen look at each other and without hesitation, they immediately know what the next step has to be.

30 min later: a tall man with a cylinder on his head and a red cape enters the house, he looks around and notices the corpse, or what's left of it. The policemen are all looking at him patiently and waiting for an answer to the mystery.

But the Count just turns around and leaves the house as if nothing has happened. The head of the police runs after him, hoping that he says something to help solve the case. With a horrifying look on his face, the Count says:" Why does it have to be witchcraft?" I don´t want to be involved in this."

He refuses to elaborate further and leaves. 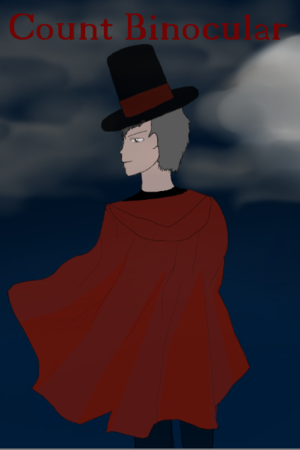