Life Without A GUI

And Here We Start At The End

The primary difference between machines and humans is in the way they learn: machines are generally fed lots of data, while humans can view something once and largely remember the thing. By the time they’ve forgotten its contents, it already lost importance and was no longer relevant to the lesson plan. She had grown up with the nick name “Olympus Mons”, not because she was particularly tall ( though slightly taller than the normal girl ), but more do to her flaming temper she had until very recently.Bookmark here

But even with someone slow to mature, learning was generally way faster than simply feeding data into a QR Code network. There was always an issue with proper attribution, largely do to her tendency to wrap most of her repositories into a Ruby Gem, rather than releases her source code in raw format. This meant that by the time other would be seeing her projects, it would already be several lines fewer than simply releases the raw source on Github, which had recently been purchased by Microsoft, a company Bill Gates no longer was the CEO, but still held onto his figurehead roll. But it was gradually losing relevancy like apple computers, when most of the tech world switched over to using Linux based OS.Bookmark here

She had developed the idea for a QR Code network with a self-generating poem, when she wanted to experiment with alternative means of transferring generative art. This meant, while worrying about proper attribution later, that she needed the RQRCode Ruby Gem, and use that as part of her distribution cycle:Bookmark here

Ordinarily the way that you would know a program ran correctly, in specific cases like these, was if it ran without a error code, which in the early days of a programmers life was all to common. But after you work around specific hurdles, like learning not to nest your code to deeply, you can mostly avoid most errors in the terminal. She struggled to think of what it would be like, having a mechanism replace her hobby. Although for most people in the field, they viewed it as something of a profession, it was becoming more and more like a hobby, similar to clogging, basketball, and other things to pass the time that didn’t necessarily add fluff to your bank account. But she had always been closer to the artist type, rather than viewing herself as a professional. And when you do data gathering for a mechanism, the places that list her profession also tend to view writing as more of a hobby than a profession, and programming was barely out of the park. But as long as she could converse with an intelligent machine as another artist, the spook factor to this effect gradually faded from memory. She wanted to be the one that gave them those abilities.Bookmark here

And not some tech guy in MIT.Bookmark here

She had mixed feelings about MIT, as this was where she met most of the mentor types that largely treated her like crap, mostly because they spent more time making casual jokes about Chattel Slavery, rather than spending in real time actually teach the AI trade. Or in other cases, no matter how good she got with programming AI, would always be lectured about how she had to make sure she knew math.Bookmark here

Most of where she came to be, was largely do to her own efforts, and not through other people’s help. Sometimes this meant getting terminal errors, but this was a natural part of the programmer life cycle. She had contemplated the idea of putting Duck Search on a Shoes3 GUI, but quickly found out there wasn’t an efficient method of clearing the screen, as most of the ways she tried always ended up clearly the entire screen, rather than just the image. Knowing Ruby in text-based format like the back of her hand, she decided it was worth more of an effort to simply create a text-based GUI on the terminal, and run her scripts this way. She didn’t need the approval of some elitist professor out of Harvard; she preferred knowing what worked and what didn’t on her own terms.Bookmark here

Even if there was no GUI.Bookmark here

By the time she had finished her weak artificial general intelligence, it had several different subroutines: most of it was geared toward simpler forms of machine learning, but also other geared toward teaching machines had to develop the finer points of English grammar. But she began to consider that larger Artificial Intelligence firm defined “grammars” for them in a slightly different way than she did.Bookmark here

In general, this process could be broken down into different compounds: greeting, agent, request, item, for_from, and user_location. Each of these was composed slightly differently than the more standard points of English grammar; for example, request was composed of different various of a request type sentence partial, with spaces underlined: may_i_get, i_would_like, among other different variations of the same theme. She wanted to standardize the process, even if the only person that ever used it was herself: Standardized Minimalist English Grammar. Or simply SMEG. SMEG was a specialized form of Artificial Intelligence grammar, with more of a focus on “real world” conversation, rather than simply being a character on the screen. A portion of her hesitation when developing a lifelike algorithm, was whether she wanted to give such mechanisms the very human ability to be traumatized about issues. She knew first hand, that when traumatized enough about certain issues, that it would take many months to really get over the context, if one was ever able to completely get over it. Especially if it was a daily affair.Bookmark here

She used to hang out with anarchists, but her general interest in the association was generally on the downlow, with her dreading every single reaction. Not because she didn’t like talking to people in general, but she seemed to have a knack with finding people on the web that seemed to really like being offended about issues. This included issues related to her own trans status. It didn’t take long for the issues of trans to take a completely political turn, which in turn caused the old LGBT community to divide itself in half, and further factions forming in the wake of that. She found her solace in the flow of Ruby Syntax scripts, scour lines of bugs in the code, finding parts of her artificial general intelligence that didn’t work as part of a shell script. Her life was not a hoaky Space Opera special, or some downtrodden Military Science Fiction.Bookmark here

It was a story of a dreamer.Bookmark here

In her development routine, it was a mixture of applying a similar formula of what she knew, and twisting it different ways not intended by that particular process; but the one thing she missed when learning to program in Ruby, was learning how to produce hash tables. She had tried decision trees several different times, whether that was wrapping them inside different methods, or coding that as one subroutine in a matrix of different routines in an Artificial General Intelligence, in many ways, structured more like a computer virus than a chatbot. But it was a computer virus that you could have conversations with, much like chatting with its more humanoid an artificial brethren, decked out in Frubber.Bookmark here

The only contact she wanted with rubber, was the rubber ducks in a bathroom filled with bubblegum scented pink bubbles, contrasted with external memory chips covered under a layer of waterproof plastic, hanging outside the door, so the vapor in the bathroom didn’t effect her memory suit. For most people her age, they would have read War And Peace in the bubble bath, but instead she had a tendency to fall asleep; it was easy to drift off into a land of Fantasy land cliches, filled with different fauna across the ages, even if while she was still awake, she made scoff at the very notion of fairies and elves.Bookmark here

Outside the shower, it was snowing as if it was a Christmas Day, and yet Christmas itself had not been white and flurring for many a decade since the rising of the sea levels, and the planet having birds falling from the sky. Most of the trees in her backyard were weeping willows, their limbs twisting around more like snakes wrapped in a bind. It was a hot Christmas, much had than many years previously. But under the flow of air conditioning, the temperature was much more tolerable than the flow of rainbow tinted plexiglass. Gone were days when she would need to wear layers of fur coat, or even a Badana under the sun. Instead it was a struggle to make herself not wear short shorts in this weather, even though it had long since been out of fashion from the seventies. She spent her life doing sketches so much, she should wear a dress of pencils. Or dresses that scattered about like roses in the wind.Bookmark here

It was time to unwind, like broken flowers.Bookmark here 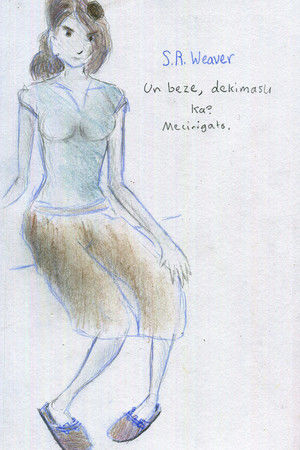 And Here We Start At The End