Papule of the Ionized Plane - a Steins;Gate Story

A layer of moisture and blood spread thickly along the rim of Kurisu's tongue. Her breathing thinned, and the hollow thrum of her lungs beckoned vomit from her chest, yet none came. The sun beat down on her vermillion locks harshly, the ends looked to be frayed from sleepless nights, but her skin was pale for another reason.

Rays of the sun bounced from her retinas, highlighting white reflections on her iris. Her pupils constricted, her palms shivered, and her gaze settled on the tiles lining the rooftop, each with deep, lingering cracks from a lifetime of weathering. Her feet were grounded faintly on the rooftop of a peculiar Radio Kaikan building, the same one which housed the wreckage of a dream-like contraption - the time machine.

Again, her locks fluttered in the wind, sweeping neatly packed bangs across her thinned-out cheeks.

Sprawled across the concrete was a figure with a familiar aura - it was one she had become acutely acquainted with these past few days. A face that drooped from its hinges, long yet with angular, trapezoid cheekbones and an arrogant, paltry stubble. Strangely, an unstable, weary miasma could be found within the crevices of his eyelids - malnourishment, perhaps - Kurisu thought, but it was deeper than that, hungrier, more rabid than that.

As his lips parted once more, those mortifying words strained through her brain.

"It was there I found Makise Kurisu stabbed by someone. It was there that I sent the very first d-mail...", Okabe croaked, salty teardrops trickled down his jaw. "It's what moved us from the Beta world line to the Alpha..."

A gasp of air choked from Kurisu's parched throat, but she forced it into silence.

"If we return to the Beta world-line..."

The piercing stare of death drilled into the skull of Makise Kurisu.

Rain battered down onto the sunken tiles of the Radio Kaikan rooftop. The breaths of two people, side by side, could be heard - both ragged - warm air pooled out from their lungs and condensed in the chilly atmosphere. The torrent of rain splashed down faintly in the background, muted by unwavering concrete.

Kurisu's nails etched into her arm, and though she tried to stop it, her skin swelled at the irritation. Thoroughly drenched, the hem of her blouse hiked up her waist, yet her gaze was unfaltering, it simply lingered on the bottom of the stairway she rested on. Beside her, Okabe fumbled around, haplessly rubbing his palms together and muttering spine-chilling premonitions under bated breath.

Reflexively, her nails plunged deeper into her skin, until the skin fastened into a tight, purple blotch. With a heavy sigh, she made a conscious effort to unclasp her grip, but her digits still scrunched together, as if compacted by a well of gravity.

Another deep breath, and fresh air circulated within her lungs. The static haze that threatened her mind dispersed slightly, and her gaze flicked over to the man next to her, who was shaking with his coarse, black hair and forehead resting in his palms. A quick glance told her that the shoulder of Okabe's lab coat had torn slightly, and under normal circumstances, she might have been able to lend an ear, maybe even a word of advice but--

"You'll die". Those words shackled her gullet; a choker of terror and guilt. Her glare intensified upon Okabe's face, and reminiscing their relationship, a faint comfort spread across her body, but still...

'Am I more valuable than a childhood friend?', and 'Is he above murder, especially after the mental toll of the time-leap?' were thoughts that burrowed into the mind of Kurisu Makise like a parasite. The overwhelming, instinctual desire to live pulsed through her veins like a drug and she found the strength to tumble down the last stretch of stairs.

Okabe Rintaro paid no notice, softly whimpering to himself in the cold, dim light of the RadiKan stairway.

Cold sweat sunk down the crevices of her brow. Her frame lay slung over, and her upper body draped backward on her chair. Slackened, her jaw lingered open like that of a dead fish, and her icy glare lay fixed on the stinging white light above. Insanity - that was the name of the deafening truth that separated Okabe Rintaro from rational thought, and it was only normal. In fact, it was Kurisu's naivete that allowed him to sink so far, and by the design of her time-leap machine, it was an inevitability that his mind would flay.

That irrationality was dangerous, infectious, she thought. As an 18-year-old genius, rational thought was essential, it was what had gotten her so far. When it came to time travel, however, how could one begin to rationalize that?

The dark circles that lined her eyes reflected hints of blue underneath the lab's dizzying fluorescent light, and as her spine balanced on being perpendicular, she ruffled her frayed palms in her hair, causing the bangs to cloud her vision. Rationality. Realistically speaking, she was terrified. She had no doubt that in choosing to save either a smart girl he'd known for 20 days or a childhood friend that he'd known for life, he would likely pick the latter - but the truth was too cruel for her to allow that.

'of the past 18 years', she thought. Vivid, visceral images burst into her brain - it was the sight of a father earnestly trying to prove his vision of time travel, only to find the bloodied corpse of his daughter in the hallway. There was no way she could allow that, after all...

"I can finally help dad out. I can finally be worth something...", she whispered with a weak cackle. A crystalline tear trickled down her cheek, absorbed by a lone wisp of her vermillion hair.

With that, she flung her spine into position and slammed a strange-looking headset on, and proceeded to dial up the PhoneWave (name subject to change). With the full knowledge of time travel at hand and the prospect of her potential death at the end of Okabe's miserable ultimatum, she pressed the button to send herself to the past, and an ominous beep rang out in response.

"I'll find us all a happy ending. No matter how long it takes." 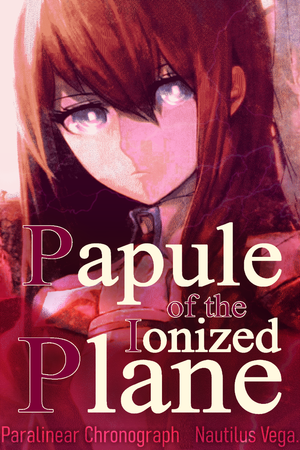 Papule of the Ionized Plane - a Steins;Gate Story