The Dream of a Soldier

The sun was setting over the city, casting a golden glow over the crowded streets. In the distance, the sound of clashing swords echoed through the air as soldiers practiced their drills.

As she watched them from the rooftop of her apartment building, Nova sighed in frustration. She had always dreamed of becoming a soldier, just like her father before her. But in this world, where guns were scarce and hard to come by, her chances of joining the ranks were slim to none.

Nova turned away from the sight and made her way down the stairs to the cramped apartment she shared with her mother. She knew she shouldn't complain - most people were just happy to have a roof over their heads and food on the table. But Nova couldn't shake the feeling that she was meant for something more.

As she pushed open the door to their apartment, Nova was greeted by the smell of cooking food. Her mother, Maria, was busy at the stove, stirring a pot of stew.

"Hey, sweetie," Maria said with a smile. "I was hoping you'd be home in time for dinner. How was your day?"

"It was alright," Nova replied, trying to keep the disappointment out of her voice. "Just the usual. How about yours?"

"Oh, you know," Maria said with a shrug. "The usual. I spent all day cooped up in that stuffy old library, trying to make sense of those old books. I swear, some of the stuff in there is just gibberish."

Nova laughed. Her mother was a librarian, and she often complained about the ancient texts she was tasked with deciphering.

"Well, at least you get to spend your days surrounded by books," Nova said. "That's more than I can say for myself."

"You'll find your path, Nova," Maria said, giving her daughter a reassuring smile. "I know you will."

Nova wasn't so sure. She had always excelled at swordfighting and other martial arts, but without access to guns, her options were limited. She couldn't even join the city guard, which was reserved for those with access to firearms.

As they sat down to dinner, Nova's thoughts were interrupted by a knock at the door.

She opened the door to find a man standing on the other side, a hood covering his face.

"Can I help you?" Nova asked warily.

"I have a message for Maria," the man said, his voice low and hushed. "Is she home?"

Nova hesitated for a moment, then nodded. "Wait here," she said, closing the door and returning to the kitchen. "Mom, there's a man at the door for you. He says he has a message."

Maria's face paled at the news. "I'll be right there," she said, getting to her feet.

Nova followed her mother to the door, curiosity getting the better of her. She watched as Maria spoke to the hooded man in hushed tones, her expression grave.

After a few minutes, Maria turned to Nova with a troubled look on her face.

"Nova, I need you to do something for me," she said. "I want you to take this bag and hide it somewhere safe. Don't tell anyone about it, and don't open it. Do you understand?"

Nova nodded, taking the proffered bag from her mother. It was heavy and clanked when she moved it, suggesting that it contained some kind of metal objects.

"What is it?" Nova asked, her curiosity getting the better of her. "What's going on?"

"I can't tell you, Nova," Maria said, shaking her head. "But it's important that you keep this safe. Promise me you won't tell anyone about it, and that you'll keep it hidden until I come back for it."

"I promise," Nova said, a sense of unease settling in the pit of her stomach. She had never seen her mother so serious before.

"Good," Maria said, relief etched on her face. "I have to go now, but I'll be back as soon as I can. Take care of yourself, Nova."

With that, Maria turned and left, disappearing into the crowded streets. Nova stood there for a moment, the bag clutched in her hands, before shaking her head and returning to the kitchen.

She spent the rest of the evening trying to shake off the strange encounter, but she couldn't shake the feeling that something was off. She knew her mother well enough to know that she was hiding something, but what could it be?

As the night wore on, Nova found herself unable to sleep. She lay in bed, turning the mysterious bag over in her hands. She knew she shouldn't open it - she had promised her mother she wouldn't. But her curiosity was getting the better of her.

Finally, unable to resist any longer, Nova slipped out of bed and made her way to the kitchen. She placed the bag on the table and, with a deep breath, opened the flap.

Inside, she found a small stash of gunpowder and other materials needed to create guns. Nova's eyes widened in surprise. Where had her mother gotten these things? And why had she felt the need to keep them hidden?

Nova spent the rest of the night experimenting with the materials, piecing together a rudimentary firearm. It wasn't the most advanced weapon, but it was a start.

As the dawn broke, Nova knew that she had to find a way to use her new abilities to make a difference in the world. She just wasn't sure how. But one thing was for certain - she would stop at nothing to protect those she loved, and to create a better future for herself and for her world.

Over the next few weeks, Nova continued to experiment with gun-making in secret, honing her skills and creating more advanced firearms. She knew that she was taking a risk - if anyone found out about her abilities, she could be in serious trouble.

But Nova was determined to use her talents for good. She began to dream of a future where guns were more readily available, and where people like her had the opportunity to defend their communities and fight for justice.

As she worked, Nova couldn't shake the feeling that she was being watched. She had always been a private person, and the idea that someone might be spying on her made her uneasy.

One day, as she was heading home from the market, Nova noticed a hooded figure following her through the crowded streets. She quickened her pace, her heart pounding in her chest.

Just as she was about to break into a run, the hooded figure grabbed her by the arm and pulled her into an alleyway.

"What do you want?" Nova demanded, trying to break free.

"We know what you're doing," the hooded figure said, his voice muffled by the hood. "We know about the guns."

Nova's heart skipped a beat. How had they found out?

"I don't know what you're talking about," she said, trying to keep her voice steady.

"Don't play dumb with us," the hooded figure said, his grip tightening on her arm. "We know you have the resources to create guns. And we want in."

Nova's mind raced. She had to find a way out of this.

"I can't help you," she said, trying to sound as convincing as possible. "I don't know where I got these resources. They were just... given to me."

The hooded figure hesitated, then let go of her arm.

"Fine," he said. "But if you change your mind, you know where to find us. And remember - if you don't cooperate, you'll regret it."

With that, the hooded figure turned and disappeared into the crowds, leaving Nova shaken and alone in the alleyway.

She knew she had to be more careful from now on. If word got out about her abilities, she could be in serious danger. But she also knew that she couldn't let her talents go to waste. She had to find a way to use them for good, no matter the risk.

As she made her way home, Nova's mind was racing with possibilities. She knew that she had a long road ahead of her, full of challenges and dangers. But she was determined to see it through, no matter what. She was going to make a difference in this world, and she was going to do it her way.

Over the next few weeks, Nova continued to work on her gun-making in secret, determined to use her abilities for good. She knew that she was taking a huge risk, but she also knew that she couldn't let her talents go to waste.

She began to think about how she could use her skills to make a difference in the world. Perhaps she could create guns for the city guard, or for other people who needed them to protect themselves. She knew that it wouldn't be easy, but she was determined to see it through.

As she worked, Nova couldn't shake the feeling that she was being watched. She had always been a private person, and the idea that someone might be spying on her made her uneasy. She made sure to keep her gun-making a secret, taking every precaution to keep her activities hidden.

Despite the dangers, Nova was determined to follow her dreams. She knew that she had a long road ahead of her, full of challenges and obstacles. But she was ready to face them head on, no matter what.

As she sat at her workbench, lost in thought, Nova heard a knock at the door. She froze, her heart racing in her chest. Who could it be?

She crept to the door and peered through the peephole, her heart sinking as she saw a hooded figure standing on the other side. It was the same hooded figure that had confronted her a few weeks ago, the one who had demanded that she turn over her guns.

Nova's mind raced. What should she do? If she opened the door, she might be putting herself in danger. But if she didn't, the hooded figure might suspect something.

She took a deep breath and opened the door, trying to keep her voice steady.

"What do you want?" she asked, trying to sound as confident as possible.

"We need your help," the hooded figure said, his voice muffled by the hood. "There's a group of bandits causing havoc on the outskirts of town, and we don't have the weapons to stop them. We heard that you have the resources to create guns, and we need you to make some for us."

Nova hesitated. She had always wanted to use her skills for good, but she wasn't sure if this was the right way to do it.

"I'll think about it," she said, trying to buy herself some time.

"We don't have much time," the hooded figure said urgently. "Please, we need your help. If you don't cooperate, who knows what could happen?"

Nova knew that she couldn't ignore the plea for help. With a heavy heart, she nodded.

The hooded figure nodded and disappeared into the night, leaving Nova to contemplate the weight of the task before her.

She knew that she had a lot of work ahead of her, and that she would have to be careful. But she was determined to use her skills for good, no matter what the risks. 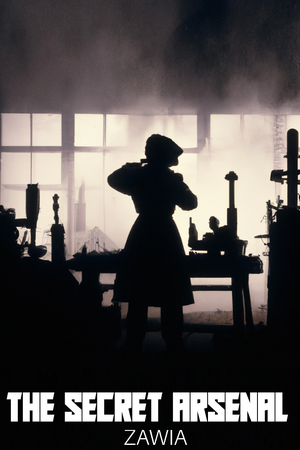