Rover’s defeat against Graphite congested news headlines for the next few days. During this time, his grit was put to the test against the constant mocking and provocation that followed him everywhere. At school, classmates would hurl insults, bump into him so he’d drop his books, or try to trip him down the escalators. Teachers would pick him to answer questions on topics that hadn’t been covered or didn’t have real answers.Bookmark here

I’m not even gonna bother with AthletaCom crap during all this.Bookmark here

In public, he’d miss buses as people blocked his entry, and the drivers “couldn’t hear or see anyone else attempting to board” and would drive away. Restaurants gave him poor service and cold food after long wait times.Bookmark here

The boy’s only sanctuary was among his family, best friend, and girlfriend. While Adele and Lumpy received their own dumbed-down animosity, they avoided the bullying. Quintegrity, on the other hand, granted Rover total immunity while in his presence, as her gracious smile, soulful aura, and ability to liquefy steel in her hands served to ward off any hatred aimed at her boyfriend. In short, Rover needed to hide behind his tiny team of devout supporters.Bookmark here

Quintegrity postponed unlocking the School Dungeon until the hatred subsided. Throughout the Super Club meetings in the penthouse, the girl displayed genuine concern for her boyfriend. However, her attempts to cheer him up often fell flat, and Lumpy and Adele helplessly watched the cheeriness gradually drain from her face day after day. Although her sexual teasing would conjure immediate, exaggerated reactions from Rover, the boy would revert to the quiet, passive state he’d been in since losing to Graphite.Bookmark here

Luckily, school authorities (reluctantly) enforced the anti-bullying rules, and the majority of harsh treatment persisted for only a few days until the next big headline replaced the AR match coverage. Rumors about the Southbound School Dungeon had spread all across Thugwood, and its ongoing mystery gave it more appeal than Rover’s public humiliation. Students at the other four Thugwood high schools had already gotten in trouble for trespassing on their own schools and digging up campus property in search of their own mysterious doorways. So far, no luck.Bookmark here

“The School Dungeon is a hot topic,” Lumpy said during a club meeting as he surfed the internet’s forums and news sites. “It’s mostly replaced the whole hatred for Rover.”Bookmark here

“Woohoo,” Rover mumbled, staring at his phone while playing the newest Cannibal Crossing game. Aside from meeting the daily quota, he hadn’t bothered with Glove Alien Fight after his loss.Bookmark here

Quintegrity nodded. “The time is ripe to raid the School Dungeon.” She leapt onto her comfy chair, grinning at the fancy, funky chandeliers. “I’ll prepare the propaganda!”Bookmark here

That night, Quintegrity hung thousands of her crayon doodle posters all over the Southbound school campus to proclaim that the Super Club supposedly had a way to open the door.Bookmark here

The Cleanup Team had restored the Big Tower at Southbound Thugwood High School earlier that week. Aside from the excavated staircase leading down to the giant door in the Big Tower lobby, it looked the same as before, as if a falling meteor girl had never caused any damage.Bookmark here

Despite numerous attempts, nobody had been able to so much as put a dent in the bulkhead. Therefore, the posters launched a schoolwide buzz that spread like avocado jelly on hot toast; it was trendy and tasty news.Bookmark here

And that was where Rover found himself, standing in front of the School Dungeon entrance at the bottom of the excavated staircase with Quintegrity, Lumpy, Adele, Graphite, Headmaster, and pretty much everyone else in the entire school. He avoided eye contact with the student body, knowing they were telepathically sending him death threats.Bookmark here

Hate me all you want. Whatever’s behind this door belongs to the Super Club!Bookmark here

“There really is something there!” Graphite peered through his phone, surprised by the door’s ten insignias aglow with numbered AR effects.Bookmark here

Rover nodded. “Only a Special Number holder can see the associated insignia lit up in their AR camera. Because you have all ten, you can see them all on your phone.”Bookmark here

Only Quintegrity had the nerve to reply, singing, “We kept it a secret right under everyone’s noses!”Bookmark here

Adele shook with excitement, egging Graphite on. “Hurry up and open it! Open it!”Bookmark here

“Wait!!!” A girl’s voice called through the lobby, and Skater Girl flew over the congregation of students on her Anti-Grav skateboard. Her sapphire gemstone-hair fluttered behind her like a chemical fire.Bookmark here

The punky girl hopped off her skateboard, tucking it under her arm.Bookmark here

“I made it in time,” she said, relieved. She turned to Rover. “I said I wanted a front row seat to this, so I’m not missing out.”Bookmark here

“Whoa, whoa, hold on, now!” Headmaster waved his hands in disapproval. “I can’t have just any-ol’-one headin’ in like dis.”Bookmark here

“Yes,” he said, “but dat’s only fer gettin’ into our school, not doing ridiculous stuff like openin’ dis door, ya see?”Bookmark here

“It’s okay,” Quintegrity said. “In the name of the Super Club, Skater Girl is coming with us!”Bookmark here

Headmaster shook his head. “Dat’d work out, but she’s also under da supervision of her school in Northish. Not even da Super Club has authority when dealin’ wit other schools.”Bookmark here

“In that case,” she told Headmaster with a warm smile that made her cheeks blush and eyes sparkle, “write me up.”Bookmark here

Putting her arm around Skater Girl, Quintegrity laughed, saying, “She’s coming with us, so in the name of the Super Club, write me up for breaking the rules.”Bookmark here

Headmaster sighed. “Dang it. Okay. But know dis, Quinn, dat it be ’bout time I think of limitin’ da Super Club’s power. Ya’ll been gettin’ away wit too much, so I’m bringin’ da hammer down!”Bookmark here

Rover was baffled, giving Quintegrity a look of uncertainty. However, the smile she returned let him know it’d be fine.Bookmark here

“Graphite,” Lumpy said, “see anything for getting in?”Bookmark here

“Hmm…” Graphite moved closer to the door, scrutinizing it through the Glove Alien Fight AR function. “Not really. I’ll bring out my character.”Bookmark here

As soon as Graphite’s character was projected into the AR environment, the digital insignias on the door reacted, shining brighter. Everyone had their phones and tablets out, surprised that they could now see the effects that had been limited to the Special Number holders.Bookmark here

A rumbling sound came from every device, accompanied by an orchestral crescendo of the Glove Alien Fight special achievement jingle in the game’s soundtrack, but enhanced to a much more epic reprise to give the impression that an enormous event was underway.Bookmark here

Excited whispers breezed through the Big Tower lobby. Rover looked at Quintegrity whose face was full of childlike wonder as she watched the door—he knew if it was marvelous to witness through phones and tablets, then it must’ve been utterly stupendous for Quintegrity seeing and hearing the augmented reality effects manifest around her.Bookmark here

The lights from the door grew brighter until everyone’s screens were saturated with glowing color. The game’s sweeping soundtrack soared through the octaves, a wall of sound and music reaching its theatrical culmination…Bookmark here

…When every AR device locked up, frozen.Bookmark here

But not only for those witnessing the event firsthand in the Big Tower. No…every single phone, tablet, and Glove Alien Fight-capable piece of technology in Thugwood went dark and silent at once.Bookmark here

So, everybody panicked. What else could they do?Bookmark here

“What just happened?!” Rover gasped, being only the millionth person to ask that question in the past five seconds.Bookmark here

“I don’t know!” Adele grunted, being only the millionth person to respond with that answer during the same timeframe.Bookmark here

“Huh?” Skater Girl watched her phone screen light up with the startup sequence. “My phone’s rebooting on its own.”Bookmark here

“I think everyone’s is,” Lumpy replied, seeing the same reactions from the people around them.Bookmark here

Rover cracked a smirk. “I wonder if I should’ve brought my headset and controller for this…”Bookmark here

All across the Thugwood Metropolitan Address, people’s devices rebooted and displayed the same message to every resident:Bookmark here

“WELCOME TO THE NEXT PHASE OF GLOVE ALIEN FIGHT”Bookmark here

An AR “button” appeared on the wall next to the School Dungeon entrance. Graphite hesitated, then had his avatar hop up and smack it.Bookmark here

Grinding and hissing, the giant metal bulkhead shuddered and split down the center, sending dust and ozone and oily smells into the air as it slid open.Bookmark here 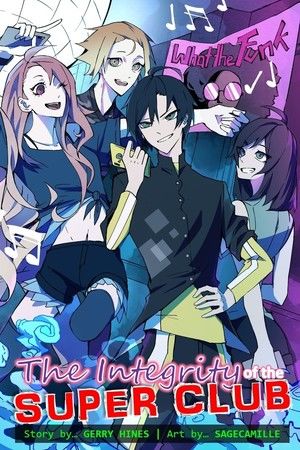