Reincarnated Hero and the Secret Alliance

Equipped with H&K pistols and bullet proof vests, he and his bodyguard squad got ambushed by an unknown terrorist group while escorting the Prime Minster on the sidewalk. Bookmark here

During the long firefight and outgunned by the terrorists' assault rifles, the military  bodyguard squad held their ground and waited for reinforcements.  Bookmark here

Soon after the reinforcements arrived, they were able to eliminate the terrorist group. Bookmark here

However, a terrorist pretended to be dead and at the right moment, he directly aimed at the Prime Minister.  Bookmark here

Naoko quickly spotted him. He then pushed the Prime Minister aside and took a bullet to his chest.  Bookmark here

Although, the bullet unfortunately turned out to be a fatal armor piercing type. Naoko started losing a lot of blood.Bookmark here

Knowing that Naoko would die soon, the Prime Minister quickly went up to him and told his thanks.Bookmark here

"Thank you for saving my life. You did Japan proud.", the Prime Minister commended in a sad tone. Bookmark here

"It has been my honor serving you and our country.", Naoko proudly replied as his last words.Bookmark here

"Where am I? I'm dead, right?", Naoko thought to himself.Bookmark here

"Yes, you are.", a mysterious voice answered.Bookmark here

"Who are you?", Naoko hesitatingly replied. Bookmark here

"What's going to happen to me?", Naoko questioned.Bookmark here

"Okay. I'll have you reincarnated in another world and born to a noble family due to your selfless heroic action.", the Angel of Death replied. Bookmark here

After the Angel's reply, Naoko Matsuda got reincarnated in another world as a noble family's baby. Bookmark here

Because of the Angel of Death's influence on giving a dream to the Silverfang family, Naoko's name became Naoko Silver. Bookmark here

The fantasy world is called Arthia. In this world, there is an on-going war between the Star Kingdom and Demon Lord's invading forces. It became known as the Great Demon War. Bookmark here

During his peaceful childhood years, Naoko has gradually recovered his previous life memories. He then grew up as a teenager and attended an adventurer academy. Bookmark here

Because of his prodigy status, he was given a legendary long sword weapon called Almer. The weapon can shape-shift between its sword form and another form that the wielder desires. Naoko chose its second form to become a revolver pistol.Bookmark here

After his graduation, he formed his own adventurer party with his three female friends and dedicated themselves to defeat the Demon Lord.Bookmark here

During their adventures to the final battle of the war, Naoko's party has managed to defeat the Demon Lord. But, it came at a price. His party members got killed during the fight. Bookmark here

Since after the Great Demon War ended, Naoko became the Star Kingdom's Legendary Hero. However, he became lonely due to his deceased female party members. Bookmark here

Who he mourned the most was his close childhood friend named Siera Wellsong. They were suppose to get married after the war and have his other two female friends living with them.Bookmark here

Years later in Japan, the Japan Self Defense has discovered an ancient crystal artifact that produce temporary portals to another world. Bookmark here

The military has sent an investigation team to visit the other side. Bookmark here

Meanwhile, the Star Kingdom detected the mysterious anomaly. They deployed Naoko and a military platoon to investigate it.Bookmark here

When both sides encountered and attempted to communicate with each other, Naoko recognized the Japanese language and explained to them that he is their reincarnated bodyguard hero. Bookmark here

A few months later and with Naoko Silverfang's influence, the two nations peacefully agreed to become secret allies and have a joint military alliance. Bookmark here

They established a special ghost force that is equipped knowledge from both worlds and is tasked to indirectly protect Japan and the Star Kingdom from any international threat. Bookmark here

They are called the Star Ghost Agency. Bookmark here 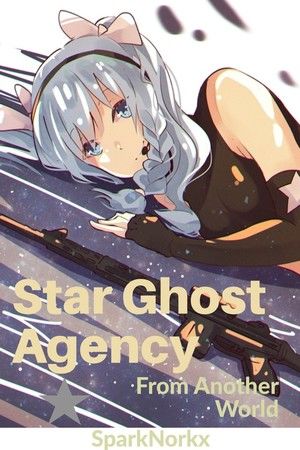