The Solar Fever had been terrorising the land of Gasheka for a couple months already. Children, youths, adults and the elderly… all succumbed to it. For Prince Saga, the eldest son of the Crown Prince, this was all new. It's true that he had heard some rumours about a certain sickness but he hadn't thought it was serious at all. He didn't know people had died until his own grandmother, the queen of the nation, passed away three days before.Bookmark here

It happened suddenly. She was fine in the morning when he went to pay her a visit, but by the time the sun set, she was in utter agony in her bed. She had a high and fast fever, and then she was gone.Bookmark here

Soon, the subjects of the palace were erratic, everyone was afraid to have caught the sickness, and even more afraid to have been the one to bring it inside. It was well-known that the king didn't really care much for his wife, but it was also well-known that he liked to get revenge any time he could. Someone would have to pay for the queen's death, it didn't matter if the person was guilty or not.Bookmark here

Prince Saga, nonetheless, didn't care (not like he had to) about such matters. He lived leisurely in his apartments, he'd play music all day or play a game with his young daughter, Lady Mira. He would listen to tales told by some storyteller that was popular at the time or just nap the day away. Even after the Queen's death, nobody would stop him from his routine.Bookmark here

And he was right, in a way, for he didn't die nor he got sick. Others weren't as lucky as him and as soon as they showed symptoms, they were blamed for the Queen's death. During those three days before the funeral, at least a dozen servants were killed in the dungeons.Bookmark here

Prince Saga didn't know about this, he didn't ask and nobody informed him. He was known to be indifferent to the matters of the palace. But it didn't matter how detached he was, he still had to attend the royal funeral.Bookmark here

And so he did.Bookmark here

He wore all yellow, as it was custom, and with his daughter in his arms, he walked up to the Central Yard. There, visitors from every important clan in the nation were on their knees showing their respect to the late Queen, who was laid on a bed of flowers under the sunlight. It was noon and the Sun, their main deity, was just above their heads.Bookmark here

Mira's voice was just a murmur as she held tightly onto her dad. It was only her second time attending a funeral, but it was the first that she could understand. When her own mother died, she had been too young.Bookmark here

—Mhn, Baba won't be back. But don't feel sad, she will remain in your memories.Bookmark here

—Are you sure she won't be back?Bookmark here

Tears started flowing from her dark eyes, and although she was silent, Saga preferred to take her away from such a grim place. The people wailing could even scare him.Bookmark here

With a steady pace, they soon entered the Evergreen Yard, where the Queen had lived. The garden in front of her room was the most beautiful in the whole palace and Mira's favourite place. He put her down and she immediately went to check on a small sapling she had planted with her great-grandmother some time before.Bookmark here

Saga sat down and stared. Death didn't affect him, for he rarely made strong relationships with others, including his family. Seeing his daughter suffer, however, made his heart ache, he wanted to cry.Bookmark here

—Is there a reason you've walked away from the funeral?Bookmark here

A young man, probably in his late twenties, stood just metres from him. Saga didn't recognise him, but could tell by his accent that he was from the south. Perhaps some clan leader? Which clans were from the southern regions? Saga wasn't good at that, he barely left the palace nor he participated in networking.Bookmark here

— I don't like to hear people crying, it's tiresome. What about you, young lord?Bookmark here

—I also don't like to hear people crying, especially when it's undeserved.Bookmark here

—I mean… Why should people cry for such a horrible person? It's not like any of them is actually sad about her death, they're just scared of not looking affected enough and being punished by the King.Bookmark here

Saga was puzzled. The man looked serene, yet his voice was full of hate. It was deep, it didn't fit his small frame.Bookmark here

—Who are you, young lord? Which clan do you belong to? —Saga asked.Bookmark here

—Is my clan important? I believe people should be judged only by their actions and not by their origins. Don't you think so?Bookmark here

—Sure, it seems fair. Still, I'd like to know who you are.Bookmark here

—Ruta —he paused for a second—. And you are Saga, Prince Noroku, eldest son of Crown Prince Shiu and eldest grandson of King Yoru.Bookmark here

—Ah… Have we met before, lord Ruta?Bookmark here

—No. But now that we've met, I hope you won't forget about me. I have something important to tell you.Bookmark here

Saga, fearing his words, made a sign so he'd wait. He called a maid that was nearby and instructed her to take Mira away. She didn't need to listen to whatever Ruta would say.Bookmark here

—Now you may talk.Bookmark here

Ruta smiled, but there wasn't any happiness in his expression. He seemed annoyed.Bookmark here

—Your family is destroying this nation. Your grandfather has killed countless innocent people, your uncle has raped every servant in this palace, and even you, the one that doesn't do anything at all, have been contributing to my people's suffering.Bookmark here

—I don't know what you're talking about.Bookmark here

—Of course you don't, do you know anything at all, Saga?Bookmark here

Ruta was met with silence. In his thirty-three years of life, Saga has never been treated in such a way. He didn't know how to react, frozen he stayed in his place. Who was Ruta? And why was he so angry?Bookmark here

—Your family will fall —Ruta threatened, his eyes seemed to sparkled before the idea—, and you will fall with them.Bookmark here

The Prince didn't even have time to reply, Ruta fled as soon as his message was delivered. Perplexed, Saga just watched him run away. A small token fell from his clothes and, just when he made sure Ruta had left, Saga decided to inspect it.Bookmark here

It was a clan token made of gold. On one side a heron was carved and in the back, beautifully written, said "Soshazi". Saga recognised that name, it was the clan his best friend belonged to.Bookmark here

Two weeks after the funeral, Saga kept remembering his encounter with Ruta. Even though he had sent his personal guards to look for him, the man was nowhere to be found. There wasn't any disturbance in the palace either, it was like he was there only to warn him about the future.
Bookmark here

Maybe Ruta wanted to scare him. And he did, he was afraid.Bookmark here

Saga kept his daughter with him at all times. He wouldn't drink alcohol nor invite entertainers. Nobody could enter his apartments, only his mother and sister were allowed to visit. Soon, everyone started talking about the Prince's paranoia.Bookmark here

Kiti looked at him with worrisome eyes. She was his youngest sibling and the one he was closer to. She had helped him with Mira after his wife's death, and spent most of her time with them. His sudden change in personality had distraught her.Bookmark here

—You've been acting strange since the Queen's funeral. Did something happen?Bookmark here

It did, but Saga couldn't dare to say it. Kiti was still so young, so innocent… He had to protect her.Bookmark here

—You don't seem sad, you look… Mhn, you look like something is worrying you.Bookmark here

—I'm afraid the palace is not the best place for Mira.Bookmark here

—Do… —Kiti seemed to doubt herself—. Do you want to move out?Bookmark here

—Yes, I think I should. I used to live in my own home when I was married. I've mourned for long enough, I should go back.Bookmark here

—But, but… Mira is still so young, are you sure you'll be able to take care of her?Bookmark here

—Of course I will! She's my daughter. It's true that when Kiya died I was too sad to properly care for my child, but I'm alright now. I can do this.Bookmark here

Kiti didn't say anything else, but she didn't need to. Saga knew what she wanted. She didn't like the palace either (did anybody like it at all?), so she probably wanted to leave with him. Saga had thought about that already, he could ask his parents to let Kiti go with him to help with Mira. But would the Crown Princess let her go?Bookmark here

She was her only daughter and the youngest of her children. Barely twenty years old, Kiti had lived her whole life by her mother's side. She had only ever left the palace to visit Saga in the past, but back then she had never even touched the soil outside.Bookmark here

Saga, however, wanted to take her with him. He'd be restless if he left her behind in such a place. And so he thought of good arguments to convince his mother about it. It took him several days until he got an answer: she accepted, although reluctantly.Bookmark here

By the end of the month, Saga and his entourage left the palace. He was accompanied by his daughter, his sister and his four guards: Dari, Ragi, Sheshu and Dida. He didn't take any servants or any of his belongings, he just fled as soon as he could.Bookmark here

But he didn't go to his house, instead he marched south.Bookmark here 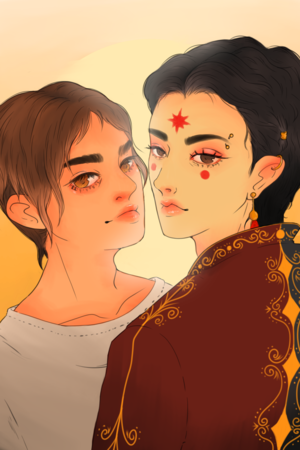