The Girl From The Garden - I

Her hair was the colour of honey, or was that description too obscure? Bookmark here

Her mahogany skin was smooth and free of marking. Her hair was the colour of fresh honey, flowing delicately from the beehive as the beekeeper worked his charms. It twisted, turned and coiled like vines. As peculiar as her hair was to him, her eyes felt more noteworthy. Purple jewels that should shine bright like amethysts were dull and almost hollow. Bookmark here

They had no life in them, and her blank expression made it worse. Bookmark here

She was merely sitting there. Bookmark here

Those soulless eyes of hers staring out the window as her head turned, the rest of her body straight. He watched her intensely, for well over seventeen strokes now, yet she hadn't moved at all. To him, she looked like a doll and not a person. She was too pretty, too pristine and too lifeless to be human. Bookmark here

Who was she? Bookmark here

He straightened himself immediately as he heard the familiar sound of an angry woman calling his name. Cautiously, he turned, closing the wooden door as he plastered a smile onto his face. Greeted by the agitated expression of a middle-aged woman dressed in white robes, he scratched his head awkwardly. Bookmark here

Her brown hair was tied neatly into a ponytail, adorned with a gold octagonal circlet of rubies and topaz. Firmly in her hands was a basket of grey fabric, likely new clothes for the girl. Bookmark here

Her eyes narrowed at him, "Did I not give you three chapters to read and two sums to do?" Bookmark here

"I wanted to check on the girl, is all." Bookmark here

"She needs not your attendance, Cullen," the priestess retorted, "She has me and Father Nelwood for that. Did you finish your work, or am I to punish you?" Bookmark here

He grinned, "I've finished, Mother. And I did my reading for next week too." Bookmark here

"I'd wager thirty golds that you did them wrong. I'll check them after supper. The Helios warns us against idle hands, Cullen. Go to the kitchen and help Igna with supper. And mind you manners, I am not raising a Blackwater Heathen." Bookmark here

He bowed respectfully, opening his hands to show her the underside of his palms and lifting them slowly. Bookmark here

His voice draped in sarcasm, "To the Mother of this Cathedral, Lucia Hane, I, Cullen James Radcliffe, give my respects. By the goodness of the Eternal Flame, Xanthea's light guide you as I am unworthy of your grace! To my knees must I fall in forgiveness, in atonement for the errors of my impertinence, I shall." Bookmark here

The priestess sighed, lightly tapping him on the top of his head. He winced, rubbing the area despite the fact there was no pain.Bookmark here

"Your sarcasm is duly noted. I'll deduce points for smartassery when I hand in your end-of-season report. Now run before Xanthea leaves me, and I perform an act of true wickedness." Bookmark here

He smiled, waving at her before bolting down the hallway. Bookmark here

From the corner of his eyes, he caught a glimpse of it. Mother Hane entered her, that girl from the garden, and he found himself thinking of her once more.Bookmark here

The girl from the garden, at the very least, that's what he called her. She had no name to which she answered, and apart of him questioned if she even understood a word they said.Bookmark here

Two weeks ago, Brother Igna discovered her in the Cathedral Gardens. She was unconscious and badly wounded, barely clinging on to life. It was by the grace of the town doctor and Father Nelwood's knowledge of herbs that she survived. But she never communicated with them. Bookmark here

She spoke not Vatian tongue, but she wasn't a war prisoner from Peraka or Couros. The Royal Military marred prisoners with a hot iron - but her flesh was silky smooth. It made him extremely curious. Bookmark here

Who was this girl? Did she have a family? Was it wrong of him to hope that she didn't? Bookmark here

The Cathedral was his home, but it was a lonely one. Mother Hane and Father Nelwood were kind people, as was Brother Igna and Sister Alali - but they were all older than him. This Cathedral had no other children, and the ones of the town did not like him either. Bookmark here

He'd spent so much of his life playing on his own, but this girl, she could be a little sister to him. He would have someone to dote on, to protect - she could be his family. Was that too selfish of a wish? Bookmark here

He turned on his heel towards the dining room. In the shadowy distance, beyond the corridor and archway, he saw a pair of familiar faces. Sister Alali and Father Nelwood sat around the dining table, deeply conversing. The slender-framed Alali looked happy with how the conversation was going - her brown eyes were sparkling with excitement. Father Nelwood responded between sips of the dark red fluid in his glass, occasionally pushing up his black-framed glasses.Bookmark here

He almost felt bad about interrupting them. Almost. Bookmark here

"The Child of the Cathedral greets Sister and Father," he said as he bowed, "Glory to the lights of her divine sun." Bookmark here

"Come on now Alali, play nice with Cullen," Father Nelwood shook his head, "The light of her sun guides you. You are acknowledged, be seated amongst her disciples."Bookmark here

He took his usual seat at the table - leaving space where Mother Hane usually sat between him and Alali. Bookmark here

"We will continue this conversation another time, Alali. For now, we give thanks to Torel for the food Igna prepared." Bookmark here

"Its too early for a muskrat like you to know," Alali sneered, "Be patient, and the divines will inform you in due time." Bookmark here

Nelwood laughed, "Is it? Should I inform Lucia? I'm sure she'll find sadistic pleasure in making you write a thousand lines on that." Bookmark here

Alali waved her finger, "This is why you don't miss your devotions. Pay attention to your schooling. How else will you become a righteous Priest under Xanthea's Domain?" Bookmark here

He wanted to retort that this woman skipped her devotions by faking a fever, but he bit his tongue.Bookmark here

The brown-haired Alali enjoyed the image of a devoted disciple, and he wasn't going to ruin such. Not without compensation and protection for the rest of his life. Bookmark here

They went on to talk about random things, and it was these moments he cherished the most. They would sit at the dinner table and talk amongst each other - this felt good to him. Bookmark here

He wondered if she would enjoy these moments too. The girl from the garden, what about her was so intriguing? His mind steadily wandered to her. She was a thought in the back of his brain that would come to the front and make him stray from the present moment.Bookmark here

How old was she? Her figure was smaller than his own - and he was already fourteen. Was she younger than him? By how much? Bookmark here

All these questions and he didn't have answers to them. Bookmark here

This girl from the garden - when would he be able to talk to her? Bookmark here

"May I have your attention? I would like to present someone." Bookmark here

Mother Hane's voice dragged him back to the present moment violently - head turning as he focused on the small figure behind her. Bookmark here

"From this day onwards, we host a guest at this Cathedral. Her name is unknown, but Xanthe has blessed me with a vision. We call her Aphasia." Bookmark here

The honey-haired girl was standing before him, amethyst eyes glimpsing at the wooden floors. Bookmark here

Was her name Aphasia? Bookmark here

It had a pretty nice ring to it.Bookmark here 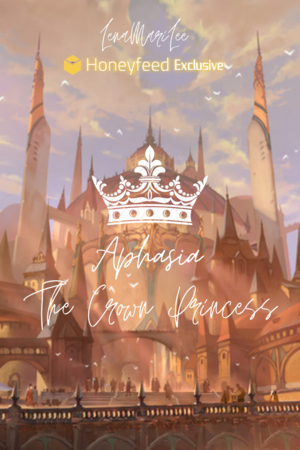