Day 592: My Name is Yoko Akiyama, and I Shall Be Your Guide

(Ah, hello there, reader! First, I should clear up some confusion that's sure to be had from you reading this. I am not Osamu Ashikaga. Actually, I am Yoko Akiyama. You and I are going to be together for a while, considering what happened over a year ago. By now, you must know, right? My light in this world, my one true love...died. Tsukiakari Senkumo died along with him.)Bookmark here

Over a year later, in the month of April.Bookmark here

Yoko sat at the counter of her kitchen with all the windows wide open, allowing the cool, Spring air into her home. She sipped a steaming cup of tea alone as her hair was scarlet blown around by the light breeze.Bookmark here

(Was I devastated? Of course I was. I still am. The hardest thing was waking up and wondering why he was no longer here with us. Why, of all people, did it have to be him? It wasn't fair. No matter how many times I prayed and cried, he never came back. Soon after his death, Izanami just...well, she vanished. Hmm, I should be more precise, shouldn't I? Excuse me. Osamu was always better at this internal dialogue thing. It's not that Izanami is actually physically non-existant. It's that she just went away somewhere and never said a word. Who can blame her? Losing Osamu and Tsukiakari must've been heart-breaking for her.)Bookmark here

(Whew, last set of parentheses were was getting full, huh? Please, excuse me. Osamu was much more efficient at this internal dialogue thing than I am. Oh, are you wondering about Isabella? She's fine, I suppose. She's alive and healthy, but... her injuries currently still prohibit her from walking. She's been bound to a wheelchair ever since the fight with Tsukiakari. As much as Gaijin annoys me, it does pain me to see someone of her fiery spirit be confined to a wheelchair. She moved out of the house once she was healed enough. She said she couldn't handle being here anymore. It's okay though, she hasn't left Japan. In fact, she lives pretty close to here, and we talk every day. We both miss Osamu dearly. She's called me crying late at night so many times I've lost count.)Bookmark here

Yoko finished her tea and rinsed out the cup in the sink. Her house was peaceful, but deathly quiet, a stark difference from when everyone lived with her. Thinking back to those times, Yoko could've sworn she heard the laughter of Isabella, Osamu, and the others reverberating in her kitchen. She quickly turned off her sink and spun around, but of course, she found herself alone in her home. She sighed, wondering if she would ever learn to stop falling for auditory hallucinations.Bookmark here

(And as for me? Oh darling, who knew you cared so much? This is hard to say so bluntly, but I did not have a very strong will to live after Osamu's death. I wanted to kill myself. I wanted to, but then I wondered how Izzy would feel, or Izanami. We all suffered the same tragedy, so it would be selfish if I clocked out, wouldn't it? So, I stayed alive. Can't say I hate it. It's gotten a little better with time, but things...just aren't how they used to be. Please excuse me, a woman is very talkative, even in her mind. I didn't mean to take up so much of your time, darling. I hope you'll forgive me.)Bookmark here

On this breezy, spring day, Yoko walked to the grocery store in a flowing, pink dress to do some shopping. It was the most mundane of mundane tasks, simply going through the aisles and picking out whatever she needed. Not once did she laugh or crack a smile since the day started.Bookmark here

(When they were here, we always used to go the store together. Maybe not all of us, but someone would accompany me. Now it just feels like how it did before Osamu came back to town. Alone.)Bookmark here

Yoko felt her cheeks burn as she searched the aisles for sugar. She wiped them with her fingers, realizing tears were rolling down her face. "Damn it. I'm crying in public again..."Bookmark here

Isabella's day felt just as empty and hollow. She bought herself a nice house on the hill, about as big as Yoko's. Being bound to her wheelchair meant she couldn't do things like workout or cook like she wanted to. The living room was large and had three massive windows that gave her a view of the town below. She usually wore her hair in braided pigtails with ribbons tied on the bottom. If she wasn't reading, she was watching TV, or taking apart one of her guns and putting them back together to pass the time.Bookmark here

Her doorbell rang, so she went to answer it and let Yoko inside. Despite her condition, Isabella still kept her fiery spirit and optimism.Bookmark here

"Of course not." Yoko assured.Bookmark here

(I frequently bought Izzy's groceries and brought them to her. I cook for her and look out for her as much as I can. It's not like she has any family here in Japan. I suppose you can say I also feel bad for letting her come along that night. Because of that, she's not able to walk.)Bookmark here

Yoko whipped up some miso soup with shrimp and a slightly spicy broth for them both. They sat at the table in the living room as the sun shined through the windows, washing the place in amber light.Bookmark here

"Have have you been?" Yoko asked.Bookmark here

"Bored as always." Isabella snickered. "Not being able to walk isn't fun. It may stay like this for a while before I can even dream of walking again."Bookmark here

Yoko stared at her reflection in the soup, trying hard not to remember the events of that night. "I'm sorry, Izzy."Bookmark here

"Don't worry about it. I'm glad that I got to lose my ability to walk fighting by your side rather than a silly accident or something. How have you been?"Bookmark here

"Lonely, honestly. It's like things have gone back to the way they used to be."Bookmark here

Isabella smiled as she remembered something. "Crazy, isn't it? It's been a year and a half since the day Osamu returned to this town."Bookmark here

"Yeah. I think that was September of 2016...he died close to January....yep. It's been a year and approximately seven months since he first returned."Bookmark here

Yoko remembered that first day, when she tracked Osamu down and kidnapped him. "I remember. Summer was on its last legs when he came back."Bookmark here

"Is that bowling alley still there?" Isabella asked.Bookmark here

"Yeah. Doesn't look like anyone is going to be building anything there any time soon, so I guess there isn't much of a reason to bother tearing it down."Bookmark here

"Good. I wouldn't want it to be destroyed."Bookmark here

"Hey, Yoko. I've been thinking. I might leave Japan."Bookmark here

Yoko put down her soup. Those words kicked her heart around.Bookmark here

"There's not much left for me here, and Dad is worried sick about me." Isabella said. "I mean, his daughter can't walk anymore, you know? He's especially worried after we lost Hux."Bookmark here

(Huxley. Isabella's brother was killed in action last October. Even still, she stayed here, probably to make sure I had some company.)Bookmark here

"I'd be very heartbroken if you left, but if that's what you want to do, I can't stop you." Yoko said. "I know your father must be very worried, and a lot of it is my fault."Bookmark here

"Oh, please! It really isn't your fault at all!" Isabella laughed, trying to lighten her mood.Bookmark here

Isabella protested no further. She reached out and grabbed Yoko's hand, enclosing it with her own. "It's not your fault, Yoko. At any rate, I forgive you."Bookmark here

Later that afternoon, Yoko left Isabella's place, waving goodbye as she made her walk back home.Bookmark here

(That's right, I should mention this. After Tsukiakari's massacre, much of the neighborhood is...well...empty. There isn't nearly as many people as there used to be, and the ones that were left moved away. It's only the reasonable thing to do. You know what's weird, though? That horrible massacre was cleaned up and all, but I don't recall the police ever showing up, nor was that massacre reported on the news. Strange, isn't it? I never figured out why that is. Well, it doesn't change the fact that Izzy is thinking of leaving. First Osamu dies, Izanami disappears, and now she's thinking of going home. Our little family is disappearing, one by one.)Bookmark here

Yoko passed by Aika's place, who had also moved out of the neighborhood.Bookmark here

(As for Aika, she really accomplished her dream. She has a band called Morning Star, and they've played all around the country. I think she's getting ready for an international tour soon too. I can only imagine how much fun she's having now. It wall thanks to Osamu and Izanami making the sacrifice they made. It gave her a second chance at life. Maybe some day, I might move out of the neighborhood too. There's a lot of memories here, but there's no point if it's empty.)Bookmark here

Yoko finally returned to her empty, quiet house. She stepped inside, kicking off her sandals at the door. She put her two bags of groceries down and took off her denim jacket, leaving it on the coat rack.Bookmark here

"I'm home." Yoko called out to no one.Bookmark here

(Some days are really easy.)Bookmark here

She was greeted with silence. Just the thought of another day in an empty house was enough to make her tears flow again. Her heart shook and shuddered inside her chest as she slouched down on the floor, hugging her knees as she sobbed alone.Bookmark here

(And some are very hard.)Bookmark here 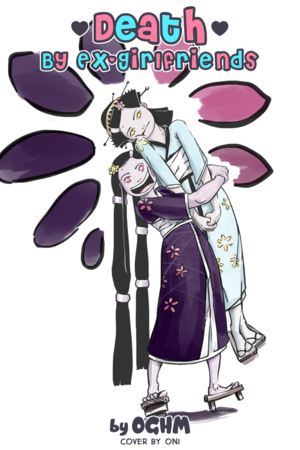