Prelude: Retrospective Sea of The Unknown

Beyond This World's Ripples

Every time it was the same. Unyielding, unchanging. It had reached a point where she could barely even care at all. The distinctive scenery was blurry in her eyes, meaning she was back into the bottomless sea. A sea where she could breathe, waiting for the upcoming ripple to drag her existence back. Darkness swallowed her whole, not leaving a single trace of light behind.Bookmark here

Were her efforts really worth the sacrifice? Why am I still doing this?Bookmark here

“This is ridiculous,” she muttered, the blackness evaporating as if they were wind trails in the unexisting sky.Bookmark here

The girl’s ears perked up, upon hearing a voice that was the only thing between her sanity and going lunatic. Bookmark here

An upside-down crescent moon shined brightly behind the silhouette’s back, a plenilune gaze drawing all the light as if it were a rising magnetic field. Countless drops of water echoed in the distance, a distorted view observing the marine atmosphere. The girl knew pretty well who it was, and a sigh of disappointment exited her pale lips as if it were a cloud. Even if this person was the only thing keeping her in shape, reuniting this way had become tedious and some sort of ritual. Whenever she found herself in this sea, this figure would always come to her, being her only ally.Bookmark here

The moon was a croissant-silver satellite hanging in the lonely ocean-sky. Lasers of moonlight, as bright as diamond-flame, turned the sea a-glow like melted platinum. It was as if the unknown girl was watching a scene from an old fable stepping off the page and she was beguiled by its beauty. The waves were a-glitter like curved scales and she became lost in the haunting lullaby of their swell and sigh.Bookmark here

“Any clues?” she said trying to sound calm, resisting the urge to curse.Bookmark here

“For a God, you are useless.”Bookmark here

“I am sorry…” they apologized.Bookmark here

“I know it’s not your fault.” The girl mentioned. “I’m getting tired of this place.”Bookmark here

“The ocean is a reminder that problems are insignificant and that humans are simply inadequate compared to nature.”Bookmark here

“I am sorry…” Bookmark here

During the awkward silence, bubbles rose up as if they were floating lamps. Shimmering with light, the girl could see smiles, laughter, pain, sorrow and grief. Voices she was unable to let go even after all this time. Going, again and again, only to end up in this sea, watching her many lives in a retrospective view, as if it was a lens. Deep inside her soul, she perfectly knew that a wonderful world should be waiting for her, somewhere. However, after two hundred years of misery, she had just given up. Bookmark here

Every time I die, my consciousness shifts to another reality where everything is the same, except I’m alive again. Even if at first the transition is usually seamless and unnoticeable, after two hundred years I’ve started to spend more time in this sea of ripples.Bookmark here

The bubbles popped, leaving ripples behind—each of them being a world.Bookmark here

Even if she jumped into the ripple and submerged herself into another reality, things never went according to plan. Sure, on some occasions, some scenarios played themselves exactly the same, she knew exactly the outcomes and how to reach a possible happy ending. Nonetheless, she was powerless alone. Winding up dead after things go haywire. Asking for help was not allowed, since it was an unusual chessboard.Bookmark here

Each world had its set of rules, and outside help or godly powers were not permitted. Bookmark here

When she opened her eyes after awakening, few fragments would remain in her mind. Even if she saw who killed her, she was unable to remember. A sacrifice for the ability to reincarnate, so it would seem. The girl was sure that this useless God knew perfectly well who her assailant was, yet remained silent. It would seem as if they didn’t do it out of malice though, due to their over apologies and concern.Bookmark here

Being an irregular existence, not even the Gods could help her.Bookmark here

“Time is running out…” The God said in a panic.Bookmark here

“No, don’t say that! This place is just for the two of us! I mean—”Bookmark here

“Enough,” the girl was losing her temper. “I get what you are trying to say, and let me add it doesn’t make me feel any better.”Bookmark here

Her feet leaving prints as if the sea had become sand, she went straight ahead to a shining ripple, closing her eyes and holding a deep breath. The God disappeared without saying a word, the silver moon crashing down like an asteroid. The end of the sea approached, her past lives converging into different ripples between time and space, bending reality. She felt as if she was falling into a spiral, trembling in pain, biting her mouth until it bled, she repeated eternity as if it were a miniature garden inside a silver box.Bookmark here

“A piece of a broken past. Future is no more. The present is unknown. The girl cried trapped inside the circle. Tell me the story of an endless world. Mistakes cannot be forgotten so easily. If not, this would be a happy world. Show me what I yearn for.”Bookmark here

As light enveloped her and water submerged her lungs, her small prayer reached out towards the unknown. Igniting the world anew with such brilliance, the sun rose with casual elegance. Bookmark here

Another endless, waiting game under the chorus of cicadas and the endless cacophony of crickets. She was back to the beginning, read to confront this chessboard once more. Would it be the same as others? Would it have a divergent branch? Certainly, there was no uncertainty in her will to live. Bookmark here

With a step forward, the cruel summer breeze held her in its arm, welcoming her to a sealed fate.Bookmark here 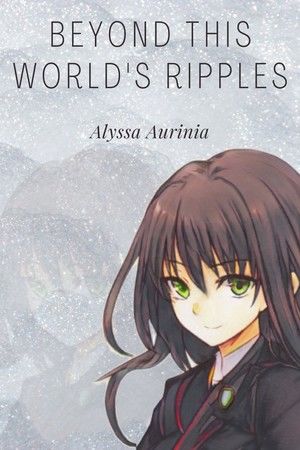 Beyond This World's Ripples