“Hey, cut that out,” Curtis sat at a fountain, feeling her delicate soft hands circle around his neck.

The girl’s supple lips still clasped to the tips of his right ear as she shook her head. She tightened her hold around him, her chest squeezed against his back.

“What’s that?” as quickly as she said that, her open lips closed against his ears yet again.

“A spell to proved the particle theory you mentioned.”

Pleased with his reply, she started licking his ear.

“Seriously stop!” Throwing aside the notes he held, Curtis jumped forward in retreat. Both of them fell to the ground.

Curtis frantically raised himself up, turning around to look at her.

Her mellow white skin shone like porcelain, ocher hair glowing in a distinct gold. Sprawled on the ground, she lifted her head to expose an ethereal pair of jade green eyes. Calm, pure— innocent.

Curtis thought her eyes were deeper than the forest.

“Pervert,” Curtis snickered with a smile.

“Oh?” She got up unsteadily, tossing herself right at him. Their bodies met in an embrace.

Curtis could feel her warmth spread all around his body. Their heat grew, hotter and hotter.

Curtis backed away to see her faint— disappearing smile.

The world distorted, colours fading into black and white, her figure drifting away.

Fire rose from beneath.

His vision shuddered, now no longer at the fountain where he once stood.

Crimson flames twisted into a small whirl. The ice around him melted into water. Those close to the blaze vaporized into gas.

The fire coiled around her.

Remnants of flaky white particles descended to the ground like gentle snowflakes.

Curtis stared at the scene, his mind went blank, “Who..”

A whale docked beside the newly found pillar. The Giga pillar amongst the other surrounding pillars.

It had to be at least half the size of the pillar supporting Haital Kingdom. Dense thick woods and coral reefs weaved together in harmony. If not for the tiny bit of flat plains at the edge of this pillar they were at, it would’ve been troublesome to land.

Violet clouds shot across the darkening sky. The sun peeked from the horizon, half of it blocked by the murky abyss below. The sky went from an orange hue before melting into a deep navy-purple at the very bottom.

There was a corrosive barrier that separated this world from the endless void below. Those who tied to descend further would turn into mush. No adventurer could venture at those depths.

On the plains stood a campfire started with a few dry branches from the woods. A very thin barrier enveloped the fire.

“Um, not bright enough..?” Ellis tilted her head at Curtis.

“Is it really?” Curtis looked at her questionably.

Ellis held a book in her hand. Before this, her eyes were squinting hard at the contents under the campfire light. The main issue was the flickering of the flame.

She sent Curtis a pleading expression.

Curtis raised his hand and at the tip of his index finger coalesced a tiny ball of luminous light. He let the light orb drift away from him, moving in a wavy line before stopping above Ellis’ shoulder. It was like a lamp, illuminating the pages of her novel.

“Thanks for the light Curtis,” Ellis smiled.

They chuckled before returning to their errands..

Ellis read her novel with ever-changing expressions. Curtis reviewed the contents of his bulky spellbook. Visualizing himself connecting notes, making sure he had remembered the fundamentals of magic required for a spell.

Night fell, the world slipped into darkness. With the campfire burning with warm light, a fuzzing feeling of vitality emanating from within the flames.

Curtis snuck a look at her, she was looking at Whaley with his eyes closed. In proportion to its body, Whaley’s eyes were like peanuts. A peanut that was as big as an adult’s torso.

“Sure is,” Curtis returned his gaze to his spellbook. He felt slightly drowsy with the meal Ellis made before still warm in his stomach.

Ellis’ arbitrary puffing cheeks and exaggerated gasps would be leaked out of her mouth. Just what was the novel about? Curtis couldn’t help but wonder how mere words could turn Ellis into a weird sound-making machine. Not sexual in any sort of way of course.

Curtis snuck another look at her.

“You’re always so hooked up on that spellbook of yours...”, Ellis smack shut her novel, eyes narrowed at Curtis.

Apparently, those weird sounds weren’t caused by the novel. Instead, it was to attract his attention.

Curtis didn’t know how to react to that.

Ellis circled around Curtis, hugging him from behind. She placed her head on his shoulders.

Curtis brought the two ends of his spellbook together and put it aside. He told Ellis to sit on his lap.

Naturally, Curtis made her lean against him, one hand coupled around her waist while the other fidgeted with her soft, delicate hands.

Well, at least to Curtis it felt that way. As she was a sword user, her hands were practically full of calluses, especially where the boney part met the handle of the sword.

“So what do you want to talk about?”

“Erm, well,” she pondered a bit, which looked somewhat cute, before continuing, “If one day, I were to become one of the Jesters, you wouldn’t hesitate to kill me would you?”

She didn’t turn around, her eyes glued to her own hand Curtis was playing with.

“If one day you became a part of the Jesters huh...” Curtis thought about it.

Jesters. It was a group that appeared out of nowhere. Rumours say they could execute team fights with unparalleled coordination. Utilizing an array of unusual fighting styles to seduce the opponent. Simply put it, unpredictable. Their origin? Unknown.

Because of the sudden spike in rumours surrounding their existence, it became a prevalent gossip topic. Jesters were said to be a cult-like existence, comprised of many small cliques of 5 to 6 people.

Was brainwashing really possible? As the mage he was, Curtis didn’t know. And would they one day encounter one of these so-called Jesters? He had a hunch for some reason.

“Haha... I think I’m just thinking too much. This head of mine. When reading a novel, all sorts of weird things or delusions enter my mind..”

Curtis restrained her fidgeting hand, his fingers interlocked with hers.

There was a small spark at the contact but Ellis didn’t notice.

“Let’s just hope that won’t ever happen?” Ellis tilted her head slightly. From that angle, Curtis could see the hint of worry emanating from her round sky-blue eyes.

“Yeah, pretty sure it wouldn’t happen,” Curtis looked to the sky.

The legend of the Jesters revived once more when one person from the cult severed links with the other Jesters. He was no longer controlled by the other Jesters, his thoughts were independent. He referred to himself as beings from another world. And that they had arrived at the heavenly realm.

That guy was locked up in the depths of the kingdom dungeon though.

Because of his flashy declarations, people around the kingdom now knew how the brainwashing sermon was conducted. The victim had to either be under deep sleep or at the brink of giving up consciousness. Blood would be used as a catalyst, depending on the situation.

How does brainwashing work then?

Well— not that Curtis really heard the Jester’s so-called declaration. All of it was hearsay in the end. But one thing was for certain. Something had happened to have caused this rumour.

The campfire still burning, Curtis dimmed the flames just slightly. It created a gentle-warm atmosphere, great for sleeping but..

“Did you read a horror novel?” Curtis asked.

“Um, together?” tilted her head to looks behind.

Curtis made a puzzled expression.

“Ur.. let’s just not sleep using our sleeping bags. This is a newly discovered piece of land so it would be easier to ready ourselves if a threat were to appear right?”

Curtis turned his body and took out a large blanket from one of the baggage that hung on Whaley via wind magic. It was something like a levitation spell, though it wasn’t a manipulation of gravity.

Using another spell, he turned the stiff log they sat on before soft, like a pillow without making it feel mushy at all. Of the two blankets, one was placed over it.

“This should do?” Curtis had his doubts.

“Thank you.” Ellis, smiling effusively. With this, they won’t be sleeping separately, but together, under one blanket. She didn’t think it would turn out better than expected.

Ellis lifted her heavy eyelids. She let out a groggy moan as she sat up. Her hand rubbed her tired eyes. She hadn’t slept but was barely awake.

Ellis remained still. There was something was off about this. The sound came from the darkness not too far away.

Curtis still lay quietly beside her.

Narrowing her eyes, sharpening her ears, she raised her vigilance.

The dim campfire flared up, making Ellis squinted her eyes.

“Yeah, I heard that too.” Curtis sat up. The campfire had now erupted into a bleach-white egg bulb.

“I think we prepare ourselves. There are more than one targets, I think.”

Both of them stood up and readied their stance, a light orb coalesced and drifted into the pitch dark front. Tree barks with green crystals sparkled, becoming visible where the light touched. Curtis commanded the orb to split into tiny light seeds, scattered them out in an arc.

What appeared were various different silhouettes. Silhouette of trees, leaves, corals, the blurry shadow of fluttering grass and a figure.

Multiple figures hanging by their necks, their heads bent at an impossible angle.

The silhouettes were obvious. Anyone could guess what it was in one look.

‘Just how many were there?’

Tyrant-class creatures were fine but this?

“What is that... are they actually what I think they are?” Curtis thought it could’ve been some kind of wild crustacean beast. Craning his head towards Ellis’ direction, he could see her shivering. Holding her sword, a bead of sweat dripped down her cheek.

Authors note: Hello! I’m a newbie here Huh? Anyways, I signed up for honeyfeed the moment I saw it. Like... wha... built for actual light novel lovers? Gosh, I just gotta get my hands dirty. Though I kinda wonder how the ecosystem works on honeyfeed? Anyhow, it seems to me like it’s a relatively new (Or has just become trending) website. By no means am I a good writer (I probably s*ck— really bad..). But the main point is LIGHT NOVEL. Not just some random ‘web novel’ website that in itself isn’t ‘light novel genre’ friendly, I think.. (I mean, I’ve been publishing my work on RoyalRoad for 4 months now? And I quit publishing on Webnovel cuz that website just scares me. Honestly. I won’t go into the specifics but I learnt that the way the website is built—well.. let’s just say it’s manipulative, emotionally. But take that with a grain of good al’ salt cuz I ain’t a pro. I’m just a writer trying my best to publish my own light novel in the future.) 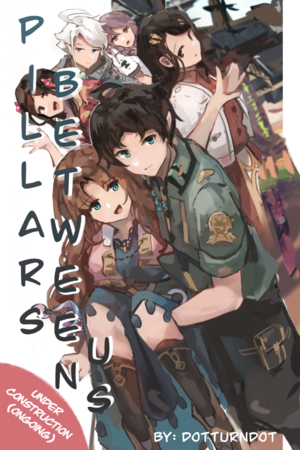