Hi! I’m Suzette, I’m a very young tabby kitten. I have just turned twelve years old; that is in human years. Just a month ago I had my very first fertile cycle, but since way before, when I was much younger, I’ve had a beautiful fantasy, a beautiful dream: I wish so very much to be able to get pregnant!!

Since the day I had my first fertile cycle I begged, a lot, to my master to allow and help me to fulfill that dream; until after a lot of pleading, he finally agreed to help me!

Some days later, he fastened my leash and took me out for a walk, farther than we had ever gone before. When I asked him where we were going, he replied that he had a surprise for me

While we were walking he again asked if I was completely sure that this day was the most fertile one in my cycle. Confidently I answered yes, for I kept a precise record of my fertility cycles, anxiously waiting for the day when I would be able to fulfill that beautiful fantasy with which I dreamt every night

After a few more minutes we arrived to a pretty and green field, I immediately noticed that there vigorously trotted, as if anxiously waiting for us, the most immense and powerful Frisian Stallion that I had ever seen before

He was so big and strong that his hooves made the ground, around us, tremble with each stomp, he was so magnificent and impressive that I immediately began to shake with fear and anxiety, for my sight was set on his equally impressive and enormous member

Without stopping my master took me directly before him, who upon seeing us vigorously trotted to meet us. While my master introduced us, I was practically shaking without control for when I was able to see him up close he turned to be even more enormous and muscular than he had seemed when I saw him at a distance, I was so terrified that I was barely able to say:

“Pleased to meet you, Maximus” in response with a weak and timid voice; without ceasing to admire him, open mouthed, paying particularly attention at not only the intimidating member he had but also at the huge and rugged bag of skin that hung between his legs, filled with his very abundant seed

I was in such rapture admiring him, that I barely noticed when my master released my leash and Maximus gently but firmly took me to a zone in that field that was covered with a particularly soft, cool and abundant grass

While Maximus, impatiently took me towards that place, I noticed that several personas had gathered and together with my master, watched while filming everything that was happening

Confused by all that was happening, I meekly allowed Maximus to position me, to adjust me in such a manner that would ease the mating between us

It wasn’t until I felt his erect, firm and virile member rubbing against my small and soft feminine entrance that I realized what was about to happen. It was then that I reacted and with an enormous smile, but shaking almost uncontrollably with fear, that I lifted my hips as much as I was able to, in an effort to allow the immense member of Maximus to easily go inside me

Unable to stop shaking, I managed to see my master among the crowd and whispered a: “THANK YOU!” at the same time that I felt how Maximus began to thrust with his member in order to penetrate me. My whole body began to shake even more, with fear and anxiety, as I felt how the enormous stallion slowly began to break into my small, tight and virginal opening

Since this was going to be my first time, since I was about to be deflowered, by such an enormous and powerful stallion, I was totally terrified, but at the same time wished with all my strength for it to happen

The applauses and yells from the crowd, that cheered and encouraged us, since the very first contact of Maximus gigantic member against my narrow opening rose in crescendo until it became a deafening roar when I screamed, with pleasure and pain, in the precise instant in which Maximus member penetrated me

While thin threads of blood tricked between my legs, the yells and applauses from the crowd became even stronger, at the same time that the gigantic member of that muscular stallion kept going, deeper and deeper , more and more into my narrow and tight female cavity. I begged to the feline Goddess, Bastet, for help so that I could be able to make my dream come true

I was unable to hear my own screams and moans of pleasure above the yells from the crowd, that enthusiastically cheered for us to keep going, above the very loud whinnying form Maximus who, each time with greater strength and intensity, hit me with his enormous member very deep inside of me

Each hit forced a small opening, very deep within me, to yield until it finally opened, before his powerful member, allowing him to enter all the way into my little womb

My screams and moans were only a reflection of the tide of pleasure in which I was wrapped; I was like a little speck of dust that was getting whipped by the powerful tornado of pleasure and delight that Maximus gave to me

That thunderous roar reached its peak when, like a powerful explosion, the vigorous stallion exploded inside of me, filling my womb with all of his dense and virile seed. I shook, trembled and almost fainted from pure pleasure when I felt that burning fluid inside of me, almost burning me from inside

I remained there lying on the soft and cool grass for a long time, unable to move, I listened to the crowd around me congratulate me from afar as they slowly, little by little, withdrew after having captured in video, each and every little detail, of what had happened there

It was almost night time when I awoke and my master, who had patiently remained by my side, asked if I was able to walk. But when I tried to do so I felt my legs so weak that I was unable to walk, so he gently lifted me in his arms, as if I were but a little kitten, and carried me home

While advancing, he explained to me that if everything went well, within some month I would be giving birth to my very first filly or colt. I listened to what he said, full of illusions, while caressing my still very full womb, wishing with all my strength that my dreams could come true

“...and once you’re again ready” my master explained to me, while gently putting me down on my soft bed close to the hot chimney “I’ll make sure that you get mounted by a bull, which I’ve been assured is even bigger and stronger than Maximus” he said at the same time that he covered me with a soft blanket and caressed me behind my little ears with great tenderness

“Yaay!” I was barely able to weakly say, but with an enormous smile, before falling asleep dreaming with that enormous bull and wishing so much that I could already get pregnant from him 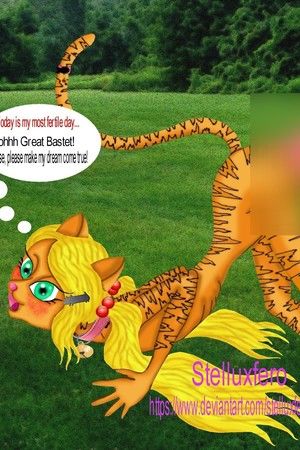