Honoka focused her katana on Marie, her fierce stare pierced like a lion demanding her to submit. Marie looked unfazed by this. She stepped forward and retrieved a trident from her magic.Bookmark here

“The Water Kingdom is not yours to take!” said Marie.Bookmark here

“…So, you rather choose death? Do you realize how outnumbered you are? How different you and I are in comparison?” said Honoka.Bookmark here

“I do. I’ve heard about your accomplishments. And I can tell your Nightmare energy is no laughing matter. But even still! The Water Kingdom has never given up before. I don’t intend for my people to give up now.”Bookmark here

Honoka observed the people around Marie. She first looked at Alice and then Josie.Bookmark here

“Shizuko,” she called her sister to attention, “fight the red head over there. I’ll handle the rest.”Bookmark here

Shizuko withdrew a staff from her magic. She pointed it and the Nightmare snake slithered toward that direction. She turned to Josie and waved her staff in the same direction again.Bookmark here

”Shizuko nodded. Josie was about to leave when a voice interrupted her stride.Bookmark here

She smiled. “I will! Don’t worry about me.”Bookmark here

She took out her daggers and raised them in a fighting stance.Bookmark here

People were scrambling out of the way as the snake powered through the sand. Shizuko stuck close to the creature. Her staff held high like a marching band leader. Eventually the snake stopped, and Shizuko came to a halt as well. Nothing but the crashing waves could be heard for a moment. Josie was about to move closer when Shizuko jerked her staff toward the left side, blocking her.Bookmark here

“Um, ok. What are we waiting for?”Bookmark here

Shizuko didn’t respond. She raised her staff once more and stood resolute. The puzzled Josie rubbed her hair. She surveyed the area to find out why they had to wait. Nothing, not even a tiny hint was present anywhere. Until suddenly…Boom! Nightmare energy popped like fireworks in the sky behind Josie.Bookmark here

Shizuko tapped her staff against the sand. The snake immediately snapped its attention towards Josie, then hissed at her. Josie grabbed Dragwind from her magic. When she attempted to unsheathe it, the snake discharged nightmare energy from their mouth. Josie jumped away and pulled her sword out.Bookmark here

The snake closed in and swung its tail. Josie pushed back as hard as she could with Dragwind. Then she attacked the snake with swift, extended sword attacks. But the creature tilted and maneuvered around them. Another burst of nightmare energy was sent flying by the snake.Bookmark here

Josie slashed it down. While she was preoccupied by the attack, Shizuko circled behind her and hit her with nightmare energy. The pained Josie staggered forward then got smacked by a tail. Like a pebble, her body skipped across the sand until she slowed to a skidding halt.Bookmark here

As she got up, the snake rammed into her. It kept pushing beyond the beach and through two buildings. Jaws opened wide, the snake was struggling to eat her.Bookmark here

Josie punched it several times. “I’m. Not. On. The. Menu,” she went for one more. “Fire punch!”Bookmark here

This smacked the snake right into the neighboring building. Josie broke free and flew to the ground. She grabbed Dragwind from her magic.Bookmark here

“Good thing I stored this earlier.” she thought to herself.Bookmark here

The snake rose from the rubble. It shook its head and then hissed at her. Josie observed the snake for its next move. During her observations, she noticed that one eye was closed shut and burned. Josie smiled to herself. Out of the corner of her eye, she saw Shizuko arrive. Her staff tapped the ground. Shadows sprouted from the earth and eerily glowed, then grew into Nightmares. They sprinted forward.Bookmark here

Josie also picked up speed. She stumbled, slashed, and rolled her way past magic projectiles. Claws wanted to meet but Dragwind got them first. A tail swung across and knocked groups of Nightmares in the way. Josie flew up right before impact. The snake launched a fury of Nightmare energy attacks. These either missed or almost made the mark. Face to face, Josie aimed for its neck. Suddenly, the snake’s tail grabbed her and flicked her. Then Nightmare energy collided.Bookmark here

Josie was falling. She fought through the pain and noticed what the snake wanted to do next: make a final blow. Dragwind laid lazily in her palm. She tightened her grip. The sword extended.Bookmark here

Josie rotated. A hissing shriek resounded as the blade sliced through. She touched down before the upper half fell. Shizuko let out an audible gasp.Bookmark here

“Is-,” Josie winced. “Is that all you got? Bring it on!”Bookmark here

Shizuko raised her staff. All Nightmares present casted their magic. Josie quickly countered with her blade. Nightmare after Nightmare swarmed her, each attack bounced or missed. Josie punished them when she saw openings. One jumped behind only to be fire punched in the face, which knocked others over. Josie noticed their numbers had shrunk.Bookmark here

“Looks like I’ll be able to win.” she thought to herself.Bookmark here

Shizuko tapped her staff. More Nightmares appeared and some had wings on their backs.Bookmark here

“Of course, it can’t be that easy.” she thought.Bookmark here

Honoka thrusted her katana. Marie kept her distance and used water magic to protect herself. Evelynn swung her double bladed battle axe. Honoka stood her ground unfazed. She swatted it away and took a swipe at her. A bubble appeared and prevented her attack from landing. Honoka grunted and turned her attention back to Marie. She sped forward. The katana was about to make contact when suddenly, Alice intervened. Her daggers absorbed the heavy impact.Bookmark here

Honoka retracted her weapon. Alice pressured her with consecutive slashes. Hit after hit, Honoka blocked them with ease. Until one slipped past and grazed her cheek.Bookmark here

“Not bad,” Honoka said while she used healing magic. “But not good enough!”Bookmark here

Alice opened her eyes and saw the huge sand crater they were standing in. Above her head was Honoka’s katana. Alice could hear Marie panting behind her.Bookmark here

From what Alice could tell as she scooted away, Marie trapped the katana in her trident. Honoka attempted to remove her sword but a lone bubble stuck it in place.Bookmark here

“And here’s another surprise!”Bookmark here

Marie cast her water magic and formed a giant bubble around Honoka.Bookmark here

“Come on. Hurry!” said Marie to Alice while she carried the trident, which still had the katana between its prongs.Bookmark here

Alice, Evelynn, and Marie got themselves into position.Bookmark here

Dream energy pelted her without remorse. Smoke had quickly risen from all the magical explosions. Sand leapt and celebrated like there was no tomorrow.Bookmark here

They stood there and watched as the smoke cleared. Time moved at an agonizing pace. Alice felt her heart beating faster as the minutes ticked by. She took a deep breath, but her nerves wouldn’t leave her alone.Bookmark here

The smoke settled and they inspected the sand crater.Bookmark here

Alice smiled. She closed her eyes for a moment. When she opened them, something fast came up close and personal. A knee rammed into her stomach. Alice was launched some distance and rolled across the sand. Honoka appeared in front of Evelynn. The force of her pressed palm blew Evelynn backwards. Then Honoka appeared by Marie. She side kicked and sent her flying.Bookmark here

Honoka scanned her surroundings and retrieved her katana. She approached Marie.Bookmark here

“Look. I don’t enjoy killing people. Never have and never will,” Honoka shook her head. “If you surrender now, we can forget this ever happened. What will it be?”Bookmark here

“…You already know my answer.”Bookmark here

“Fine,” she aimed her sword on Marie’s neck. “I’ll finish you quickly.”Bookmark here

“I need help! The red head is too strong. Hurry!” pleaded Shizuko.Bookmark here

“Be right there! Hang on.”Bookmark here

Alice watched Honoka leave the area. She ran to Marie, helped her to a sitting position, and handed her a healing potion.Bookmark here

“Thank you. Is she really gone?”Bookmark here

“Good,” she drank the healing potion. “Evelynn! Are you alright?”Bookmark here

Evelynn stretched herself to a sit-up but flopped back down.Bookmark here

Josie eliminated another wave of Nightmares. She was gasping for air. Propped on Dragwind, she noticed the panicked Shizuko use her tele-crystal bracelet.Bookmark here

“Looks like I backed her into a corner! Now is my chance.” Josie thought to herself.Bookmark here

She started walking. Which transformed into a jog. Then finally evolved into a sprint. Shizuko saw her coming. As Josie got closer, Shizuko cast Nightmare energy to stop her progress. But nothing slowed her down. Shizuko looked away and shielded herself from the inevitable.Bookmark here

Honoka jumped in between them. Before Josie could put on the brakes, Honoka smacked her with her sheathed katana. The world seemed to blur as Josie crashed into a building.Bookmark here

“Really!? B-But I don’t want to get yelled at again.”Bookmark here

Shizuko mumbled to herself, hands held on her head. Honoka placed her hands on top of hers. Shizuko snapped out of her trance and their foreheads gently laid against each other.Bookmark here

Josie pushed aside the rubble. She surveyed the area and saw Alice in the distance.Bookmark here

Alice, followed by Marie and Evelynn, heard her cries and ran over as fast as they could. Josie shambled towards the broken wall opening.Bookmark here

Evelynn grabbed Josie before she tripped. “I got you! Take it easy.”Bookmark here

Alice opened a healing potion. Josie chugged it down. With a satisfied “ahh”, she glanced at Evelynn and nodded. The moment Josie was let go, Alice tackled her with a hug.Bookmark here

Suddenly, a knight appeared from one of the side streets.Bookmark here

“I’ve come to report to you about the situation at hand.”Bookmark here

“All Nightmares attacking the city have retreated. This seems to be because of a magic explosion in the sky, acting as a signal.”Bookmark here

“I see. That explains why Honoka did that before we fought. Anything else?”Bookmark here

After the knight finished their report, Marie walked towards Josie and Alice.Bookmark here

“Is everything ok?” asked Josie.Bookmark here

“I’m sorry. I take back my decision to give you an army.”Bookmark here

“Why!? What changed your mind?” said Alice.Bookmark here

“Too many casualties and wounded. Atlantis would be defenseless if I continued to support you in our current state.”Bookmark here

“But...I can let you guys stay in my castle for the day. It’s the least I can do in return for your help.”Bookmark here

“Thank you,” Josie stretched. “But we are only staying for a few hours. Don’t want to waste too much time.”Bookmark here

“Of course. If you need anything, I’ll be in the castle.” she smiled and waved.Bookmark here

Evelynn stepped forward. “I should get going too. Gary might be worried about me.”Bookmark here

Josie and Alice were in the guest bedroom. Dressed in their nightgowns, they sat down on the beds. Josie freefell into her bed.Bookmark here

“It reminds me of my bed at home,” Alice laid down and turned to her right side. “We’re traveling to the Dream Kingdom next, right?”Bookmark here

“Yeah,” she yawned. “But first we have to pass through the...the-”Bookmark here

“Honoka...I’ve never seen a Nightmare as strong as her before. Hopefully we can manage her. Or avoid her altogether. For now, I should stop thinking about the what ifs. Only...sleep.” she thought to herself.Bookmark here

Alice drifted off to sleep.Bookmark here 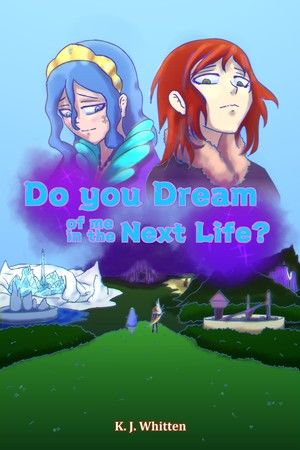