The Ethereal in the Garden

On the drive home, Izumi watched the trees and telephone poles as they drove past, but he noticed something strange. There were faint apparitions of people on occasion, yet they didn’t look quite right. The car finally came to a slow halt at a traffic light as they began to transition into the suburbs once more, so Izumi peered out the window in all directions. Nothing. He sat back down and held his camera tightly in his hands. Something seemed unsettlingly eerie about the air around him. Izumi glanced upwards at his mother, who returned his gaze through the rearview mirror.Bookmark here

“Are you alright sweetie?” She asks. “You look scared.”Bookmark here

“Mom, are ghosts real?” His voice a little shaky.Bookmark here

“If you believe they are, then yes. But don’t be scared, I’ll always be with you.” Kanae smiled at him through the rearview mirror. The boy rested in his seat more, releasing a bit of the tension in his body from his mothers words, but he wasn’t entirely convinced at the same time.Bookmark here

Izumi ran into the house once they got home and flew under his covers, camera in hand. He opened the camera roll once again, shifting through the gallery to find a picture of the strange man with the red robe, to no avail. The images that he snapped were absent of a body, as though he was not there to begin with, but Izumi was sure of what he saw. In the morning he asked his mother if you can take pictures of ghosts. “Don’t you remember what I taught you? Most people can’t see ghosts, that’s why people blame things on them all the time, like their cup moving.” Kanae ruffles her son's pink hair. “I’m sure you wouldn’t be able to see them in a camera if people can’t see them in the first place.” But I SAW him , he thought. He saw him through his camera but he didn’t appear in the actual picture. Was he just a weird ghost? It would make sense since he was dressed so strangely, the boy pondered. Suddenly, an idea came to his mind. “What about the revenant? Hmm,” his mother repeated his question as she cleared the dining table. “The revenant can do a lot of things, so yea, I suppose something like that could happen.” Kanae knelt over and grinned slyly at her son. “You think you saw the revenant at the wheat field the other day, don’t you?” Izumi rapidly nodded his head. She picked up her son and tickled him ferociously. “Then how come you weren’t eaten little boy!!!” With this, suddenly Izumi forgot about his conflict as his mother overwhelmed him with tickles and laughter.Bookmark here

The following week his mother took him to a wedding in the city, as she was hired to take pictures for the bride and groom along with a few other photographers. Izumi stayed by his mothers side as per her request, but he itched to run around the botanical garden and take pictures of all the plant and wild life. People interested him too, especially the ones at the wedding since the guests were dressed more extravagantly than he was accustomed to, but his eyes were more captivated by the variety of flowers and trees in the garden. As he began to lose control, he tried to slip past his mother, and every attempt at such was thwarted as his mother would catch his arm and give him a stern yet gentle reminder to stay with her, after all she couldn’t afford her son running off and getting into trouble as it could cause her to be fired. Izumi settled with taking pictures of the guests around him until the bride walked down the aisle, in which he decided to mimic his mothers movements. The bride was beautiful, the boy admitted, but something else was more interesting to him, which people didn’t seem to care for. There was an old man who floated beside her with tears in his eyes. Such an obviously otherworldly sight would not be ignored, so Izumi didn’t understand why no one paid him any mind. In fact, he seemed transparent, like he wasn’t even there. After the groom and bride said their vows, the guests ate and congratulated the newly wedded couple. Since the highlight of the wedding was over, Kanae allowed Izumi to leave her side, with the restrictions of staying in her sight, so no wandering off, which was more than enough for Izumi, as the only thing he aimed to do was talk to the old man. He found the old man not too far from the crowd, but alone nonetheless. There was somber joy in his countenance, something that Izumi didn’t quite understand.Bookmark here

The young boy got closer to the old man, who barely noticed him approaching, and Izumi barely noticing that he could see straight through him. “Mister, why were you crying?” He decided to hold off his curiosity on the old man’s transparency.Bookmark here

“Young lad, you can see me?” The old man was agape.Bookmark here

“Why wouldn’t I? I mean it’s kinda hard though.”Bookmark here

“I….” It seemed like he was fishing for a way to approach the child without frightening him. “My daughter, she’s the one in the pretty white dress, did you see her?” Izumi nodded his head. “I was just happy to finally see her get married.” Bookmark here

“But she didn’t seem happy to see you. No one even looked at you and you were right there!”Bookmark here

“What’s your name, young man?” He decided to start a bit easy.Bookmark here

“Izumi.” His light freckles shone in the light along with his smile, which touched the old man’s heart.Bookmark here

“Izumi, a few years ago, I had to leave and I never got to say good-bye to my family. As I closed my eyes, I realized that my biggest regret was that I would not get to see my daughter leave the nest, but when I opened my eyes again I was like this and no one could see me.”
Izumi’s eyes grew wide and he clenched his fists in excitement. “Are you a ghost Mister?!!” Bookmark here

“You could say that.” The old man weakly smiled. Bookmark here

“But how come I can see you and no one else can?” Izumi cocked his head.Bookmark here

“I’m not sure, little Izumi. But can you do me a favor?” Izumi loved helping others, so he accepted before even knowing what it was. “Can you tell my daughter that her father is very happy for her?” Izumi nodded again and ran off immediately to go tell the bride the news.Bookmark here

Izumi zigzagged through the crowd as he struggled to reach the bride. His mother, who was busy taking pictures of the couple, only lifted her head from her camera when she saw her son enter the frame as he tugged on the bride’s dress. Kanae immediately left her camera to rush towards her child, but by the time she reached him the damage had been done. “Lady, your papa wanted me to tell you that he’s really happy for you.” The bride’s cluster of emotions could be seen in her inability to properly react as the crowd around them gasped and whispered amongst themselves. “Y-you..!” Her voice was shaky as she fought tears, causing her now husband to pull her away and hand her to her family. The husband stormed towards the child and ferociously roared in his face. “How dare you say something so insensitive on the day of our wedding! Where is your mother! You should be ashamed of yourself!” Izumi began to fold into himself as he gazed upwards at the overwhelming unknown faces looking down on him, many of which began to join in with the husband’s rage and scold the frightened boy. Kanae pushed through and swept up Izumi as fast as she could, stroking his hair, she began to return the aggression towards the crowd. “How could you yell at a child to the point of tears? He obviously didn’t know!” The crowd barked back. “He’s your child! Why weren’t you watching him?! What kind of mother are you to let your child run around so carelessly?!!!” The husband grabbed Kanae’s arm with fire in his eyes. “You’re that photographer right? You’re fired, get the hell out of here, you and your brat of a child.” Bookmark here

She shook his arm off and pushed him away. “People like you who get off on talking down on unknowing children are disgusting. He clearly didn’t mean any harm because he’s beyond tears at this point-” Kanae clicks her tongue to stop herself from commenting further. With a traumatized Izumi in one arm, she gathers her equipment and heads home as the crowd of guests shout insults as she leaves. In the car, Izumi attempts to apologize and his mother hugs him with reassurance. “It’s alright sweetie, I know you didn’t do anything, there’s no way you could’ve known.”Bookmark here

“B-but I saw him..!” Izumi wipes his eyes but he continues to sob, his mother straining to properly hear him through his mumbling. “Her papa was right there! H-he axed me to t-tell her!”Bookmark here

Kanae used her sleeve to help dry his overflow of tears. “It’s ok, it’s ok. I believe you, ok? Just be careful next time and ask me first, ok? Not axed, ask.” She smiled. Izumi felt a bit more at ease and his tears calmed down, so he softly nodded his head.Bookmark here 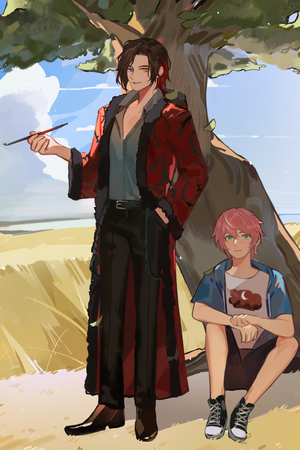