The War of the Gods

“So that's it eh?” A lone voice could be heard, echoing around an empty coliseum. Broken columns watched with interest as shattered marble fell from the quiet echo. This had been a lively place once, long ago. Festivals were held to the beat of the crowd, their roars dictating the flow of the night. Those days were long gone, however. Only remnants remain, tales of a forgotten past. That also made it the perfect place to hide something.

The man reached down and pulled a hidden lever. Gears clattered as the ground descended, creating a ramp into the darkness. With a sigh, the columns watched him enter into the darkness below, out of sight, out of mind.

As the light’s reach faded, the man held out his hand. “Furame.” A ball of orange flames appeared above his calced fingers. The new light flickered as the man carried on, observing every movement around him.

Dusty walls lined the corridor. At one time, beautiful murals had lined the halls, depicting champions of times past, according to the history books at least. All that was left was chipped paint and broken rubble stretching as far as the firelight could see.

The corridor started to rumble as the man moved along. Every time the ground shook, he only moved faster. Heavy breathing came from his mouth as his footsteps pounded at the ground, muffled by the sandy floor.

“I should still have time. That barrier can resist a Litra’s blast. If they break though, so be it, I’ve already resigned myself to die.” The man's deep voice seemed to sink into the walls. He had little intonation in his voice, a feeling of contentment the only thing leaking out. A man resigned to his fate. Anyone who saw him would have the exact same reaction.

His brown cloak swayed in the wind as he stood, back and forth like a pendulum. When his feet started to scurry across the ground, the cloak moved behind him like a cape. Only the hood lay still on top of his head. A hat was between the head and hood, holding it in place. Not that it was possible to see what lay under. Everything under the hood was completely covered in shadow, almost as if by magic.

The corridor seemed to narrow slowly, just enough to make an impact, but slight enough that it was unnoticeable until it made an impact. In the beginning the corridor was ten feet wide; now it was barely four.

“BOOM.” The echoes of an explosion seemed to shake the world. Instead of fear however, all the man did was laugh, surprising me. He sped up, the flame flickering in his hands. “What a rip-off. That old hag said I would be protected from anything with that barrier. Paid three whole Golden Cirlus for it too. I’ll have to give her a piece of my mind if I make it back that is.” Another wave of laughter came from his throat, roaring through the halls. This time, a hint of sadness joined the waves of laughter, buried deep inside the cacophony of happiness

It was less than five minutes later that he came upon a door. Great wooden arches held up the room as the ceiling jumped up, reaching forty feet tall. The door was covered in bark, like the wood was still connected to a living tree. Vines were carved onto the door. They reached up to the highest point on the door, before curling down and encircling the handle, which looked to be a part of the tree as well. Unknown text was written above the handle, in a language from long ago. It was like someone had slowly guided the tree as it grew, shaping the tree into its current form. Looking closer, the man put his palm up against the door.

“Hmm, so something still lives down here. I guess leaving the door open would be a good idea, not that it really matters.” Still, his voice was neutral, content. If I had to guess, he’d be the same way no matter what life threw at him. He could be cut in half, yet have that same calm voice.

His firm hand gripped the handle, feeling the rough bark. The door creaked as his muscles tensed up, and he pulled at the door.

It screamed as the wood was dragged along the dusty floor. A bright light filled the arched room, growing stronger as the light was allowed to escape. The door thudded against the wall as the man moved to its friend.

The room was filled with the same creaking of the door, the tensing of muscles, influx of light. Even with who knows what chasing him, the man still chooses to protect the tree. The few glimpses of his face that the shadow allowed showed a smiling man, admiring his handiwork. The shadow under his cloak never allowed a look above the nose.

Inside the room guarded by the living doors was a hellscape. Skeletons, some human, lay along the circular walls, dried blood painting them black. This was an arena, meant for underground fights. People would buy animals or slaves, and have them fight to the death. The collision up above was just for show.

A bright flame hung from the ceiling, illuminating the grey arena. Its light was steady and unmoving, much unlike the man’s flickering flame from a few moments ago. An eternal flame. That alone would be worth fifty Golden Cirlus. That wasn’t what the man was after, nor the enemy behind him.

In the center of the room under the eternal flame sat a white pillar. Unlike the arena, not a speck of dirt was visible. The pillar reflected the firelight perfectly, almost becoming a light source of its own. It was like a beacon, guiding travelers throughout the night. On top of the pillar was a small silver box. The man slowly walked towards the box. His reflection could be seen on the silver box’s black shiny top.

“That’s far enough Reginald.” The man stopped in his tracks and turned towards the entrance. “This has really been a pain you know. Normally yall don’t make it this far.”

“Well, I’m sorry that I exceeded expectations, Wyatt.” Reginald pulled his hood back, revealing a shining golden crown resting on top of his forehead. Rubies adorned the sides, shining with the light off the flame.

Wyatt sighed, his hand resting upon his forehead. His leather jacket shuffled by the movement. Several bright glowing lights surrounded him, floating lazily in a circle. “Yeah yeah. Anyway, ya got two options. First of all, you can come back, I can use some magic to erase your memory, and we can pretend this never happened. What do ya think?”

“I came this far Wyatt, do you think I’m going to quit now? Just tell me the second option so we can fight already.” Reginald said, his voice light and pleasant.

“HAHAHA. Ya were always a fighter Reginald. Very well. The second option is that these here Litra’s and I are gonna blast you to smithereens. Last chance to choose option one.”

Reginald smiled and then vanished from view, reappearing inside the eternal flame. The flames rose as he started to speak, then started to fall like rain.

Wyatt Imidietly summoned a shield above his head and pointed towards Reginald. “BLAST HIM!”

The Litra’s all turned and started to shine like stars. They started to hum before beams of light blasted out into the sky. Every beam cut through the flames, and even the ceiling. Beams of light poked into the room, views of the sky visible through them.

“You thought that could hurt me? You underestimate my Wyatt.” He was swinging around on the flame, the chain collecting it to the ceiling twisting and turning. I’d always read in books about the days before magic was banned, some magic users would bind an eternal flame to themselves, and now I see why! Simply raising my hand, I can turn the room into a sea of flames.”

Reginald smiled as he did just that. More flames poured off the side, falling onto the floor below. Well falling everywhere but one spot. Around the white alter the flames created a circle around five feet wide.

“Fuck.” Wyatt muttered a spell under his breath. Water started to spiral out from thin air, creating a bubble around his body.”Fire again! Nonstop!”

The Litra’s started to hum again seemingly to the tune of the fight. They dodged the flames effortlessly, keeping to their lazy flight. A few seconds later, and the beams were off again.

Beams of light and fire flew through the sky as Reginold succeeded in making the floor a sea of flames. Wyatt’s bubble was getting smaller and smaller and flames pestered the shield, from below and above. “I’m giving you one last chance Reginald. Surrender now, or I’ll be forced to bury ya in the ground.

“Please, when magic combines the land. That’ll never happen. You don’t have long left in this fight Wyatt. Every flame just eats away at your life now.”

“Very Well.” Wyatt crossed his arms and smiled. The water started to bubble up, shaking the whole room. “This is the only answer I got left. I’m supposed ta watch over this, yet I struggle against the first competent magic user since I got this assignment. Heh, what a failure I am.”

Time seemed to slow down as Wyatt’s bubble exploded. Air and flame became one with the water, flying wherever it could. The remaining bones were disintegrated into a million pieces from the pressure and the dried blood was wiped away clean.

“There. Ya should have listened to me, Idiot.” Wyatt opened his eyes to witness the carnage. Sunlight poured into what remained of the room, which was now effectively a shallow cave. The arena was gone, replaced with a sunlit view that shined with the fading light of the day. A cliff was at the edge of the cave, leading to a green forest far below.

“Should I have?” Wyatt jumped at the sound as the rubble cleared. Reginald stood intact, holding the silver box in his hand. A glowing barrier surrounded him, leaving Reginald perfectly intact.

“Ah, I haven’t gotten that heated in a while, Wyatt. I’ll admit that that last move of yours caught me off guard. I’ve never even heard of a spell like that before.”

All Wyatt could do was smile as Reganold held the box in his hand. “I know it’s a bit much to ask, but could you spread the word of my death to the people? They deserve a new ruler as fast as possible, hopefully, one less selfish than I.

King Reginald heald the silvery box in his hand, which started to glow as he hit the black surface. Lightning poured from the box, making Wyatt back up. The wind circled around Reginald as the sky started to darken. The sky flashed a pure white, and the King was gone.

The silver box fell towards the ground and landed without a scratch. Any trace of the king was gone as the sky returned to its normal fading light.

“I really shouldn’t do this but…” Wyatt sighed as he picked up the silver box. “From this day, the 3rd King of Geris is dead.” 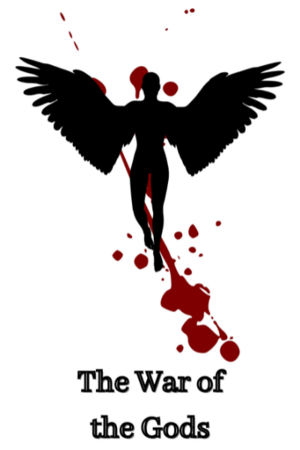 The War of the Gods