Ride Of The Reaper

The hot desert sun beats heavily on the small saloon that sits about a half miles ride from the town of Miller's End.  Inside the bar a few wranglers sit around playing cards with the meager amount of money they have earned for the day.  At the bar a thin tired looking man sits his white collar down next to a glass half filled with a brown bitter liquid,  an old man his eyes sunken and his hands dry and busted he asks the thin man "What's your name father?"  The thin man replies "My name is Jude," as he sips his drink "and I wont be a priest any longer after today."  The old man replies sadly "Thats terrible the world needs more of you."  Jude finishes his drink and just shakes his head and says quietly as if to himself "It's hard to believe in a God that let what happened to me happen."  the old man stands up and in his departing words he remarks "After you have seen the Devil, surely you must believe in God."  he walks towards the door.Bookmark here

A tall shadowy figure blocks the door way as the old man tries to leave, the shadowy figure stops him with one hand and the other firmly gripping his black six shooter beautifully ordained with a pearl grip.  The old man shouts "MOVE!"  the shadowy figure does not say a word as he pulls his gun from the holster, presses it firmly against the old mans chest and pulls the trigger.  A commotion unleashes within the bar the wranglers all stand up clumsily pulling their pistols, three shots ring out and the wranglers fall back in to their seats blood stains the dirty clothing they are wearing.  Jude falls to the floor crawling under tables and towards the back door the bartender releases two shots from his shotgun he keeps tucked behind the bar the pellets unleashed upon the shadowy figure seem to go right through him and he seems not to notice.  Jude finally makes his way out of the bar and on to his horse he begins to ride while he hears sounds of a struggle and gunshots ring out from the small bar.  Bookmark here

Just as suddenly as this shadow of a man appeared in Miller's End he vanished.  The bodies lay still across the floor of the bar as Sheriff Townsend surveys the grotesque scene of blood and violence.  A young teen aged boy sits on a barstool petrified at the sight his father lay dead behind the bar.  The Sheriff asks the boy "So you sure you seen father Jude in here before all this went down?"  the boy replies shakily "Yes my dad and I were part of his congregation."  the sheriff looks over at the bartender lifeless on the ground "I'm sorry about your father my deputy is going to bring you home to your mother and tell her the news."  Sheriff Townsend looks intently at the white collar now splattered in blood the clear cups speckled in a dark brown thick blood, "and I'm going to speak to the father."Bookmark here

Sheriff Townsend rides his horse out to Father Judes house,  it was only last week he was here on much sadder circumstance.  It was the early morning when Father Jude came hysterically to the Sheriff Townsends house the sun had barely peaked over the mountains and not a single rooster had crowed.  Jude was sobbing and he could barely make words between his cries "They...are..dead...sheriff please."  Sheriff Townsend puts on a shirt and follows the distraught priest.  The sun now rising across the sky turning the gray landscape to a bright orange as they arrived at Judes house the door still swinging against the wall wide opened.  Jude falls at the porch "I can't go in there, just warning you...they are dead."  Sheriff Townsend looks down at Jude and puts one hand on his shoulder "Stay here Father, don't move."Bookmark here 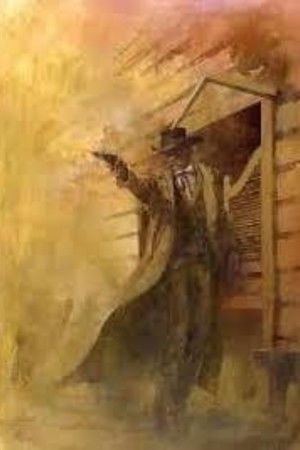 Ride Of The Reaper