The Blue of Fate

Was all there was as I awoke in a puddle of my blood and spittle.

The silence was all there was for me.

"Even the lesser of mortals are lent a warm hand in these hours." was the only sound that escaped the seams of my dehydrated throat."

"I lend my apologies for this occurrence, in light of this. The time is ripe, for the blessing of truth to reach your ears." Echoed Somni, manifesting itself this time as a small point of light before me in the vastness that stretched me.

On my knees. I was still weak. The blood clotted on the throbbing slit in my scalp.

The dullness of my flesh and hair dyed a crude red.

I reached for the voice that echoed from that distant point of light much like a child mused with a new toy.

"Please. cease this immature and fruitless endeavor of trying to grasp me. Among the multitude of nothing I exist, so much as I exist around you, I exist within you." Somni started

"mmmm." I followed with a nod and dropped my hands.

"We are one and the same. I was, just as you are now. Caged and used. Like an eternal play with fixed roles, never to break character, we begin and end only differing in our interstice." Somni paused, waiting for the question that followed.

"T-then...why did you not tell me from the beginning. From the moment you first whispered into my mind. Why did you wait until now?"

"As I said. The time was ripe, nothing more nothing less. Some distant feeling bubbles up somewhere within...you or within me. It shapes me into being and allows me to whisper to you from some distant place I have yet to know of. A place where each of us resides, relishing in our brief moments of being Lun."

Somni's words echoed from within me and around me. Conjuring something, vile and dirty; hatred. "Then what the hell am I here for? What the HELL AM I?"

"Not you, nor I, nor the world we aid behind those grand doors knows. Here..." Pausing again and moved in a brief elliptical motion, as if taking in the grotesquely cavernous room.

"At least here, we are allotted the time to be--though brief--regardless of what the many versions of ourselves do. In each of our encaged lives composed of an interstice--some mirroring the other, some conversely different--we are allotted to make some choice. We get to experience some freedom."

"A figureless creature claiming to be me. Whispering like a serpent into my ear. I CONJURE UP MY MADNESS AND DANCE WITH IT."

"FLESH AND BONE MAY FOREVER CHOOSE THEIR FATE. THESE DULLING WALLS, FEEDING ON MY SINCERITY AND DOCILE NATURE, MAY COME TO KNOW THE BUBBLING HATRED THAT BOILS WITHIN. HATRED...HATRED...HATRED"

Without realizing it, I am thrusting my head onto the ground. Slamming it over and over into the marble. Rupturing the very fabric of it all: myself, the room, and sanity. Slipping, and allowing the dullness of this cage to be sullied in crimson red.

"This...this feeling of insurmountable animosity and love. Distant, and hopeless. A fruitless endeavor being met by the very fierce threshold of change. The very feeling of causality clashing with uncertainty. Mayhaps the end is truly nigh." Continued Somni as his light dissipated into the naught of darkness, in those last moments observing the thrashing of Lun; a distant version of himself collapsing into a madness unforetold.

And just then, the banging on the door began. This time it was not Drrogi but a sea of voices along with the jingle of armor.

"SILENCE YE BEAST. SILENCE, YE CALAMITY. THIS TREACHEROUS BASTARD DRROGI HAS CURSED US TO THE BOWELS OF THE NINTH CIRCLE. FEED IT TO THIS BEAST. FEED IT TO SATIATE IT!"

A single voice maddened with fear yelled. Along with the jingle of armor followed a creak in the door.

It began to open.

And as it did. I could feel it all. My maddened and reddened being, looking unto that sweet blue. A color, so beautiful. So peaceful it drew tears to my eyes as I lay them upon it. The rich blue that lay beyond this grey. The blue that emerged from that opening in the great door, bathed the nothingness that I was.

Forgetting and remembering. dying and living. It returned to me. From whence I came. To where I must go. To what I must be.

Everything returned to me. The many lives I spent in this cage. The many Somni, I conjured.

Unknowingly, as I raised myself to take in the fullness of that light, I was before the group of creatures. The man they shoved in--Drrogi--was now a mere mess of entrails behind me.

They followed the same fate as well, and many more as they did. All through the blue light of day.

All lust and hunger, I indulged.

Such was my purpose. Given to me by my mother; the moon.

To sully the blue of this world, until it was consumed and clad in the grey we were birthed in.

Lightly I floated under a star-filled sky, the ocean underfoot, and a lonely world once blue, now clad in red.

"Amusing, is it not Somni. Your truth held all along. How close we all are to the filth of enslavement. The end and the beginning are simply shadows cast by a magnificent t blue we will never reach. The only respite we enjoy is during the interstice.

"What now do I do that I have achieved my role?"

"What now do I do, when atop the world?"

"What now do I do mother...?" Wept I, into the dullness of another cage. 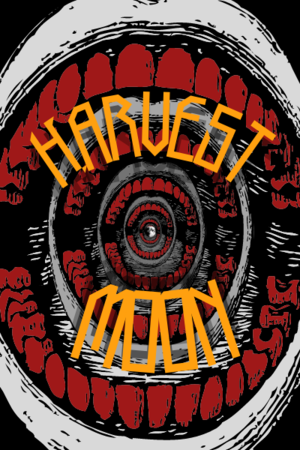