Reincarnated And Became My Little Sister!?

"You, damn brother! Hurry up and make me some food!"

This cursing voice... I'm sick of hearing it from my sister.

"Okay, okay. Wait for me to buy it in groceries first."

But what can I do, is impossible for me to do bad things to her. My name is Kazuto Tomoe. A man who was made a slave by her sister. I can't remember when she hated me, but if I remember, I think it was when we know we weren't biologically related. From then on, she start looking at me in a bad way, always selfish to me, telling me to do this and that as she pleased. In addition, because our parents rarely come home because working abroad allows her to control me freely. Because of her treatment, sometimes I have to stay at my friend's house. If I'm honest, my steadfastness in dealing with it deserves appreciation, you know? Do you understand how it feels to be reviled every time you come face to face with her? And she always yelling at me when I'm not following what she says. Other people might be angry if it happened to her, but I always loved my sister as much as she hated me. At least, this is my way of thanking to her family for taking care of me.

"Hmm? I didn't remember that there would be a storm notification on the weather channel."

Looking up at the sky where the stars should be scattered and showing its rays, but it instead covered by dark clouds accompanied by strong wind gusts and the sound of thundering lightning.

'I'd better get back after shopping.' though I when I see the weather changing too significantly. This afternoon the sky was still clear as usual with no clouds in sight, but now the whole sky is covered by it at the same time accompanied by the sound of lightning.

Will there be a demon king born here? Haha, that's an impossible thing, isn't it?

As I continued to comfort myself, a lightning strike almost hit me. It really surprised and made me jump backward. The strike was at least 5 feet away from me. It's lucky, if I walk faster I'll be a roast chicken.

But luck doesn't come anytime, I should have known that.
Just when I thought everything was safe, another thunderbolt came at me. All my nerves and muscles stiffen, my body feels burning. This really hurts! But somehow I'm still alive. That lightning won't hit me again, will it?

Unlike what I thought, the lightning kept hitting my body and it felt stronger every time it was struck. "AHHHHHH!!" I was only able to vent my pain through screaming. But no matter how hard I screamed, the pain couldn't go away completely.
.....
....
...
..

After that, all was quiet. All sounds disappeared from my ears. My vision also darkened the sense of consciousness and slowly dissipated as time passed.

Ahh, so this is what is called between life and death? All my senses can't be used properly, the pain is also gone somehow. If I die, then that's how it is. I don't have too many regrets in this life.


Because problems with my lack of social skills cause me to be less expressive to strangers, and I only have 1 friend. It's better than nothing at all. But I also want to have a lot of friends like other people in general. I guess that was my first regret. Love? There is not any. I've been too busy taking care of my sister all this time, that's why I almost never have relationships with women. No regrets about this.

Mmm? Where is this? I should be in heaven, right? Why does this building feel familiar? I couldn't even move or speak.

Many questions crossed my mind when I opened my eyes.

Wait! Why are there giants here!? Two giants with mature appearances were looking at me.

Wait, I know them. They are my adoptive parents! What's really going on here!?

My adoptive mother said while playing with my small arms. Uh? This handshape... Isn't it like a baby? Could it be that I have been reincarnated back in time? That explains why their bodies are bigger than mine. Alright, alright. I'm already starting to understand the situation, but why Misaki? Why did she say Misaki while looking at me?

A boy enters the room while asking his mother about Misaki. Those facial features.... Wasn't that me when I was little!!? 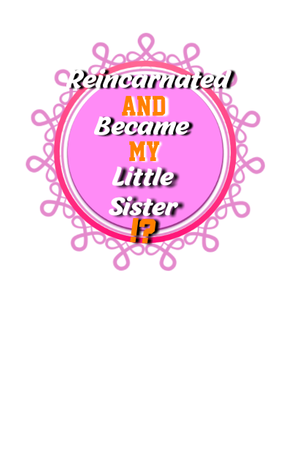 Reincarnated And Became My Little Sister!?