When Erica told me she had an embarrassing question to ask, I imagined it being along the lines of "Do you have a girlfriend?" Coolly, I would’ve told her no, and in response she’d mutter "Thank goodness…" while blushing. "So, does that mean you’re fair game? Teehee ♥” would be the natural follow up to that, of course.

She slit my throat instead.

“Darren, how many learning disabilities do you suffer from again?”

“Wh-what kind of bullying is this?”

“You always get so defensive. It’s just a question.”

Sitting opposite me in my classroom was a raven-haired girl whose bangs framed a ridiculously perfect face. I wish I could end the description there, but the truth was that Erica Park was no mere beauty. Not only was she a looker amongst lookers (for there are no fitting synonyms for the noun "beauty"), she was also an exemplary student, a talented pianist, a skilled athlete and a voracious reader. In short, Erica was a genius. It would be disingenuous of me to give you the impression she was an average girl.

Sadly, this superiority came at a dire cost.

The cost of her social intelligence.

“Defensive? Look, my reaction has nothing to do with my personality! It’s your question that’s screwed up!”

She tilted her head quizzically. “Examples?”

“Did you just make a point without supporting examples? If this were an essay, you would most certainly get a failing mark. P-E-E-L. All you did was pee. No wonder your grades are so bad.”

Okay, maybe all of her social intelligence was a dishonest way of phrasing it. People who lack EQ are generally incapable of being snarky. So, call my remark a white lie, or a euphemism, or unreliable narration, because the reality was that if Erica Park (birth name Jiwoo) actually wanted to, she was perfectly capable of having a polite conversation with no insults mixed in. In fact, she was immensely popular with the teachers for this reason. So what gave? Did this particular classmate hate me or something?

The short answer: I had no idea. Trying to figure out Jiwoo (Christian name Erica) was a fool’s errand.

After all, it’s silly to think humans can understand one another.

“So you do admit to having multiple learning disabilities after all.”

“How is that an admission of anything? If you’re angry about something, just say it.”

She had called me to our classroom after-school under the guise of an ‘embarrassing question’. Without context, that doesn’t mean much — but once you factor in the date being February 14th plus the fact I was (regrettably) her closest male friend at school, you couldn’t fault me for thinking it would be something romantic. Though I should have realised by now that the Jiwoo effect transcends all conventional logic.

“I’m not angry about anything,” she pouted. “I just need your help.”

“And if I refuse, because you’re being a prick?”

“I’m sorry? Was your input really necessary? I could’ve sworn that I made a statement, not ask a question.”

My sentence was cut off with a forceful slam of a desk. It was amazing a girl could generate that much power.

“Listen, Darren. Would you rather work as a servant, or suffer as a slave? Because if you refuse my initial kindness, then there will be nothing in it for you except despair. So, which will it be?”

“What does that even mean?”

“It appears you haven’t learned your lesson. Slavery it is.”

For someone who had such an intoxicating smile, this girl sure had a lot to learn in the realm of maintaining appearances. Perhaps she simply didn’t care about the whims of peasants. While I certainly hated how the situation had turned out, it wasn’t like I had no part to play in her growing dependence on me — and so, as I stared into her obsidian eyes, I found myself thinking back to the first time I met Erica Park.

To four months ago: the day I learned about the Gifted Education Project. 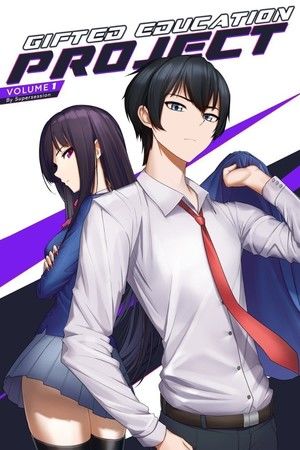