Ra: My wife is an Angel and I am a demon.

Marriage is not just a thing of externality - it is not a matter of family, religion, or wealth. Rather, it is a connection between two souls that has a reality that only the two can see and comprehend. The fact of the matter is that we cannot truly get a sense of this sixth sense until we meet our soul-partner, but here I am being used to show off a bond that may actually exist if we were to meet

“In Sickness and health, from this day onwards until death do us part, to a prosperous and blissful wedded life” The church bells ranged as we moved our lips to speak that day.

‘16 years old. Normally this would be a time filled with excitement for the future, countless paths which would change your life, again and again, these paths which are going to be decided by you, but just as we were about to take a step out into are Prime of our youth, we….Got married’

Around the start of the 15th century, the Heavenly -demonic treaty was signed, it served as a shield to maintain the distance between the demons and angels, who have migrated to the human realm, but after 500 years of peace, this might just end over here, the demons and the angles are back to their usual selves each one acting for their benefit. To strengthen the bond again and to prove that angles and demons could co-exist the AADA. Send a message a voluntary message to each and every demon and angel not in a romantic relationship to step their difference apart and prove the concept of co-existing by marring each other of the opposite sex and to live an everyday happy life of a wedded couple.

“My Name is Kazu Kamasura, although I look like an ordinary high school student, I am actually a demon, my hobby is messing with people, and cooking. I’ am also a hardcore Otaku,” said a man. looking like he was in his eighteens, an average-looking look man which sharp red eyes and a face that would instantly remind you of the down factors of humans, plus the iconic blue colour of hair gives away that he is the main male character of the story.

I stood there under a tree reminding myself who I was holding an anime figurine of my waifu ‘Misaka Mikoto’ in wide arms, I let my tears flow down my cheeks slashing to the ground, “After 2 months of savings I can finally enjoy this” looking at it I could do nothing but open it in the front garden outside the anime convention.

‘When I was a child my father who worked in AADA brought me a blue ray of the first season of the Toaru anime franchise’ back from the human world, ‘WOAH!! COOL! THIS IS AMAZING!!, where can I get more of this, the human world surely sounds fun, I have to go to the human world’ and so I studied the culture of modern anime fans and came to the human world, in order to become one with the anime culture that is left open to his world’

‘When I was a child my father who worked in AADA brought me a blue ray of the first season of the Toaru anime franchise’ back from the human world, ‘WOAH!! COOL! THIS IS AMAZING!!, where can I get more of this, the human world surely sounds fun, I have to go to the human world’ and so I studied the culture of modern anime fans and came to the human world, in order to become one with the anime culture that is left open to his world’

"This is not uncommon for an Otaku right" I could hear the branches of the tree moving and breaking, thinking it was nothing I didn't pay attention to. “RUSTLE”

"Wow, what is that?" I couldn't do anything but look and remember my life thinking it was going to end today. When I gave up and through my valuable bag away and went to catch the falling object. I laid out my hands as much as I could, but in the end. “WOAAAAH! OWOWOWOWOW!!”

“What just happened” I gasped to see a young female on me, about the same age as me on top of me. Long magenta hair that extends all the way down her waist, with two strands hanging in front. The strands on the right are weaved into a small braid, while one particularly long strand of hair protrudes from the top of her head, forming a curl that dangles above her face. She has blueish-purple eyes. The girl was all over me, my arm was turned around her neck, touching sweet as cake lips, her hands were subconsciously touching my nether region. I felt a soft but relaxing feeling on my chest at two points. “A Girl”

To avoid trouble, I laid the girl next to the tree and gently started taping her cheeks with my hand, “My clothes are all ripped and Dirty, because of you! you will need to compensate for it”

The girl went back to her state before she could even hear a thing, “My clothes”

‘First, she falls up from a tree out of nowhere then makes me try to help her, then as a resulted in I get my clothes shabby and now, at last, I hear a sound of her stomach rumbling’ “……………………….”

“What is this? It’s delicious”

“What horrible luck, not as bad as Touma….I let my guard down once and this is what happens, Although I’m looking forward to what happens after this meeting with a pretty girl and she is borderline cute for a high schooler. It’s a bit of pity. I need to work harder, but my demon side’s senses are telling me, it would better not get involved with this girl more than this. Falling from a tree there’s nothing normal about it, no matter which way I look at it”

“Thanks for saving me, you even gave me your food, Thank you so much”

“Oh, it’s nothing important. The thing is that you weren’t hurt” ‘YOU Damn women, I hope you visit hell in your afterlife for the way you made my day turn into”

“Actually, I was looking for someone, but I got tired so I decided to take a break in a tree and I ended up falling asleep!”

‘What are you a monkey, this girl is trouble"

“Hold up! Don’t tell me things that sound like they’d trigger the main mission I don’t want to know, but what bad luck……I’d better hurry up and leave before I get roped into something big that would destroy my Otaku life’ “If there is nothing else, I’m going to go….”

“Oh see, I am Acone Lucius. What’s your name” She suddenly moved from her seat approaching me ‘so close’

"You don't need to know my name; I'm just a regular person that helped another human in need. “Well, if that's how it is. So, you are the so-called right of justice," she pointed to me.

“Well thank you! I definitely won’t forget you and the favor you passed down to me, it’s about time for me to get going, bye. I’m sure we’ll meet again someday!”

‘Oh good, we didn’t make any connections! it’s unfortunate such a cute girl, but she is a little slow’ I picked up my bag to see my anime figurine once more, only to see its leg broken. 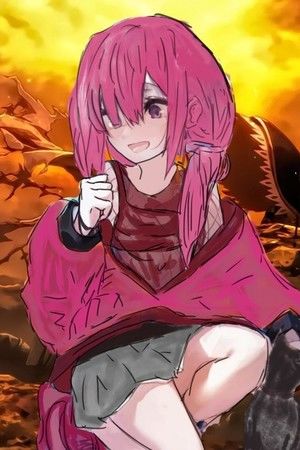 Ra: My wife is an Angel and I am a demon.