How I became the bride of the great ruler Cthulhu

The continent of Pangea is the homeland of two of the most fruitful kingdoms the history of Toril has ever seen.

The oldest of the two; the Queendom of Laolith, is still mostly magic driven, having prestigious academies of wizardry, druidcraft, and other magic. Laolith, the founder and ruler of these lands was a powerful and influential Dragonborn that was so cherished and adored by his people that his bloodline is still unwavered even after 500 years. In efforts of prolonging the absolute monarchy, the heir to the throne must always marry an elf, and after long years, finally, the beautiful half-elf half Dragonborn, Pandora Coalfell, was born. Her divine beauty was sought out by many, therefore she was raised to be a powerful sorceress and a fearsome ruler.

The Southlands, more commonly referred to as the New Kingdom of Avalon is mostly populated by Humans, especially by the followers of Bahamut. Although their arrival to Pangea was merely 70 years ago, they quickly established themselves in the land, causing a bit of conflict at first. Thanks to their disposition and charisma, they made great merchants and tradesmen; this helped them settle in the land without much further conflict, and made them create strong bonds with the north very quickly, as they tried to modernize the habitants of Pangea with newer weaponry, military equipment, and other interesting trinkets. With his dying breath, king Avalon asked his firstborn, prince Audrant Elbright, to marry the queen Pandora as a symbol of peace and union. Being raised adoring the image of Bahamut, Audrant was more than overjoyed to follow his father’s wish, and not long after the couple announced the engagement.

It was a one of a kind celebration, the first time a Human is married into the bloodline of Laolith and the first time the followers of Bahamut marry someone outside of their strong religious beliefs, but this was an ever-changing world and the two brought nothing but the image of prosperity and unification.

Today marks the anniversary of their union, and to commemorate the date there will be a big celebration to which all citizens are invited. The anniversary celebration is being held at a huge open field between the kingdoms, a place called the Twincrest. The army of Bahamut and even the private knights of Avalon are present and guarding the area well, as the king himself was to make an appearance for “the biggest announcement yet” since the union.

At the celebration, many rumored about the announcement of Pandora’s pregnancy, others even said there was already a child they would be presenting, some even spread gossip as unbelievable as them finding the oracle… all we can do now is wait for the announcement at nightfall. 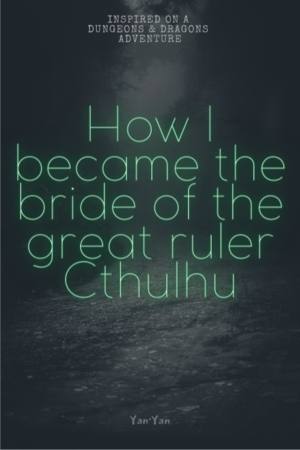 How I became the bride of the great ruler Cthulhu