Luckily, now that Yami is out of the way and Zane is finally alone, Haiiro can take the shot. Bang! It hits Zane in the shoulder and it goes through. Argh! His armor is too weak to stop anything like that right now. “Damn! What is Neto doing?!” He looks up to where the shot came from and sees the bright reflection of the sun hitting the sniper’s scope.

At that moment, Neto stormed through the rooftop door and rushes in Haiiro’s direction. He moves in a weird way, slamming his body against the air conditioning units along his path. Being in that much pain from losing three arms, he’s also losing himself. His body is changing and Jet is taking over.

Haiiro reacted to the sound of the door blowing open and turned around, shooting at the malformed monster that was once Neto. His shots hit and body pieces go flying, but there’s no stopping that thing. Consumed by rage and pain, his Jet has only one goal. And that goal is right in front of him.

Neto crashes into Haiiro and with great destruction smashes through the roof’s parapet. Both of them go flying and start falling to their death. But Neto isn’t done with his assault and is gnawing at Haiiro. Haiiro’s legs might not work but that isn’t stopping him from using his abilities in his freefall.

He uses his wire mod and wraps it around Neto’s head, pulling him closer and cutting in his flesh. Then, with a single slash, the blade between his knuckles extends and cuts Neto’s torso in half. Their fight is over and Haiiro makes peace with himself. “I’m sorry Sen.” He says while closing his eyes. All that’s left for him is gravity itself.

A few seconds pass and suddenly his momentum is stopped. He opens his eyes, thinking he might already be dead, and to his surprise is greeted by Sen’s bright smile. She has white wings behind her and is floating with Haiiro in her arms. “A-am I dead?” He asks. “No, sweety.” She answers with tears in her eyes. “But if you ever try anything like that again, you’ll wish you’d be!”

“What happened?” “I’m not fully sure myself.”- Sen says as she carefully floats to the ground-“ When I came to, I felt that you were in trouble and my body moved on its own. I think these wings are the Jet that Yami gave me.” Haiiro’s confused. “But… they’re white?” Upon closer inspection, they’re made from the same fleshy mush as Neto’s arms or Zane’s armor. “Don’t sweat the details, honey.”- her face is turning smug- “ Maybe I’m just an angel.” “No. You must be right, it’s definitely white Jet.” He answers in a snarky way.

During their reunion, Haiiro’s gun was twirling through the air and its reflection ensured Zane his safety. As he’s looking up, Ari stood up and sucker kicks Zane in the back of his head. “Take this!” As it was only a regular kick, he had plenty of time to react and put up a flesh wall. It’s not as solid as before and he notices his power draining slowly. Even that little kick was barely stopped.

Ari knows she’s outmatched and makes a run for it. Maybe Yami can buy enough time for the drugs to take full effect. And then hopefully, she could use her training as a police enforcer to take him on equally. “You’re not getting away!” Zane yells as he dashes after her.

Yami’s having a flashback of everything that happened and everyone that is dear to him. Celeste’s gloominess, Rocco’s brotherly grin, Sen and Haiiro, Aurora’s touch, and Akari’s smile. He won’t let anything be taken away from him anymore.

Struggling to stand up with his injured arm, he looks in front of him and sees Ari calling out to him with Zane right behind her. The world moves in slow motion as he dashes forward. He passes Ari and intercepts Zane by shoulder-bumping him in the stomach. Umpf! The impact is great and Zane coughs up some salivae, but his momentum is too much to intercept. As Zane is catapulted over him, Yami has no choice but to follow suit.

Aaaah! The two of them scream as they fly through the air and go over the bridge edge.

Ari had ducked right on time and was unharmed. Trembling, she slowly walks to the edge and fears the worst. There’s no way someone would survive a fall from this height. Their corpses must be laying in Suramachi by now.

We’re at the graveyard close to the church. Ari, Sen, and Haiiro are standing together and Sen is holding Haiiro tightly as if she would never let him go. They’re standing in front of one of the graves. It looks like a brand new one as the tombstone is spotless.

Akari crouches down and puts a beautiful white flower on the front of the marble. The flower is a star of Bethlehem, meant to guide those finding new paths. Aurora puts her hand on Akari’s shoulder, telling her that everything’s okay without even needing to say anything. Another hand pats her head. “Was she a good person?” She asks looking up to the one who’s patting her. “She was truly one of the best.” Yami answers.

Haiiro and Sen continue from Celeste’s grave and light some incense for Rocco. “You really scared me there. I thought you were dead.”- Ari says to Yami.-” After you went over and I checked the ridge, I saw you dangling from the side. Your arm had stretched and you were able to hang on. You could’ve called out to me!” Yami, having one of his arms plastered, apologizes awkwardly. It’s not like he had a choice.

He tries to change the topic. “So, what will you do next? You know you’re free to stay here with us if you’d like.” Ari answers. “That’s kind but I’ve already made up my mind. I will follow Haiiro and Sen to Europe and join C.E.R.C.”- She crouches down and hugs Akari, saying goodbye as she continues to tell her plans-” Jet’s mystery has yet to be solved and the research must continue. Now that Sen has a white mutation, there are only more questions. Besides, there are many with similar powers who might need the help.”

Haiiro had already said that he was going back and was delighted that Sen could join him. He had called in with C.E.R.C. and explained everything. The powered ones, the new variation, and Rocco’s death, there’s much paperwork to be done. The only thing he had left out of his story was the existence of Yami and his power. Nobody should come after him anymore. After all that, Sen, Haiiro, and Ari leave the graveyard, waving them goodbye. Before leaving through the gate, they bow a final time to Abraham.

Aurora, Yami, and Akari stay behind and as Aurora and Yami share a kiss, Genkei city is now just a little bit more save. 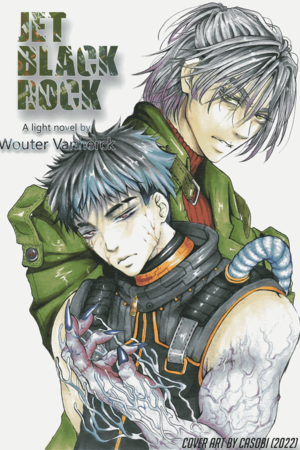