The Wolf And The Demon (IV)

The school was shaken with the tremors that ran throughout the campus and the floor rumbled which sent a shiver of absolute terror down Aiden’s spine.
“The Enigma is here,” announced the Jaeger.

Another explosion shook the building as the duo were knocked off their feet, the force of the explosion throwing them against the wall. The right side of Aiden’s face felt sunburnt. The mystery girl seemed to be out of it. He guessed the girl hit her head on the wall trying to cushion Aiden’s crash with the wall.

His breathing came out heavy, trying to catch his breath as all his breath had been knocked out of him due to the collision. The fumes from the fiery explosion only made it harder for him. The floor rumbled once again, with no explosion this time to accompany it. This time the rumbling was due to the approaching footsteps of the Enigma that rattled the entire building.

“It’s time we end this game of tag, my dear Jaeger,” spoke the Enigma at last, with a dangerous edge to its tone.Bookmark here

It was a type of voice Aiden had never heard of before, cold and demonic. It made a chill settle into his systems as if the cold of a winter long past had taken it’s residence into his body, made his bones feel as if they had cracked and splintered; never to be repaired.

His eyes only dared to venture as far as the feet of the Enigma, afraid to discover what monstrosity he would find if he looked up.

However, there were no feet to look at; only a razor sharp claws dripping with fresh crimson blood. But Aiden had always been curious and his subconscious took over his fear struck mind. His eyes slowly guided higher than the claws to the Enigma’s body. Its body was covered with thick white armour that looked like an overgrowth of bones.Bookmark here

His subconscious urged him to look at the creature’s face and his gaze slipped onto the Enigma’s face only to find its dark, swirling pits for eyes staring into his. The Enigma smirked at him, its blood coated fangs for teeth coming into Aiden’s view, ready to rip its prey into shreds at any moment.

Aiden’s heart lurched in his ribcage with fear and his stomach turned to lead. The breaking reality of this moment hit him in the face with full-force. This was a monster standing in front of him.Bookmark here

Aiden braced himself as he saw the monstrous creature open its mouth, however the impact never came. What happened next shook him to his core. The Enigma let out a frightening screech but it wasn’t just a normal screech - it was as if hundreds of demons were screeching from the depths of hell, begging to be able to walk the mortal world again.

‘She had said that Enigmas were people who disrupted the Natural Law and Order of the world,’ Aiden thought to himself in despair. ‘So I had imagined it as any other human being like her, only with an evil intention… But never a monster!’Bookmark here

Reality and logic finally caught up with him as his fight or flight response finally became active. His clutched at his chest to calm his racing heart and tried to focus and think rationally otherwise he would end up dead.

The Enigma screeched again but with lesser intensity than last time. Bookmark here

Aiden tried to back away from the Enigma but his feet seemed to be stuck to the ground, he couldn’t move them. Dread began to settle in as his body helplessly trembled with fear. The very sight of the Enigma filled his heart with terror.

‘Damn, why am I shaking?!’ he screamed in his mind. ‘Calm down,’ he continued helplessly. ‘I’m not scared of something like that!’Bookmark here

A terrified shriek sounded amidst the chaos that had taken over the once empty classroom. Aiden’s stomach felt a knot form in his stomach and his chest felt constricted as he recognized the voice.

Instead of the raging flames, the classroom was now filled with slowly fading white smoke from the explosion. The young Guardian was praying to anyone who would listen, hoping against all hope that it wasn’t who he was thinking it was. He prayed that it wasn’t her because she would not have rushed here, should not have rushed here, just to make sure that her student was alright.Bookmark here

Alas, fate is a cruel mistress!

As the smoke settled down, his vision came into clearer focus and he desperately wished that it hadn’t. The monstrous Enigma stood before the broken wall facing him amidst the charred wooden benches as he raised the petite body of his teacher, Kudelia into the air, its sharp claws gripping her head tightly. Streams of blood trickled down from her forehead, flooding down her cheeks onto the broken granite floor.

Her hazel eyes were filled with despair. She knew she was going to die. This was going to the end of the road for her. But before she did she wanted to save him, save Aiden because she did not want any of her students to die on her watch.
Bookmark here

Her voice sounded so low that Aiden would have missed it if he was not paying attention.

The world was so peaceful yet so cruel. The world that drags all your loved ones to the depths of hell. Killed-found… killed… murdered at home… you murdered her… you can’t save anyone… murderer-Murderer-MURDERER.
‘No, I didn’t do it,’ he reassured himself. ‘I won’t remember… I am not going to let anyone die today.’
It was at that moment that Aiden Kualasis’ mind went blank. His body moved on its own. He climbed over the destroyed wall and landed over the charred ground. He set his right leg slightly ahead of his left, preparing for a sprint. His black pupils locked on Kudelia’s struggling figure only one thought dominating his actions – Save her.


Every student in the Guardian School were taught basic Astarte Manipulation like manipulating fire, air, water, land, lightning and other elements of nature. This was called the elemental art, however since they were just basics it could not be used in a large scale like in closed combat.For combat each student’s affinity towards a particular element was tested and once the students were paired with their inner element they were taught combat using that particular element manipulation. It was the same for Aiden and his element was lightning.

“Lightning nature,” he chanted as he had a hundred times before, calling upon his power to perform his signature move in an attempt to fight. “Fulgur Armis.”Bookmark here

Black symbols like tattoos appeared all over his body before slowly dissolving into his skin. His entire body started to emit black tendrils of lightning as the Astarte particles present within him accumulated at his feet and at the tips of his fingers. Bookmark here

Aiden’s right hand was pulled back curled into a tight fist as he aimed for the claw that held Miss Kudelia by her head. He was going to hit the Enigma’s claw with enough force so that it would let go of Kudelia. Aiden was only a handful of feet away from hitting it as he thrust forward with the black lightning fist.
“Got him,” Aiden mumbled under his breath. The monster casually leaned to the side as Aiden passed over his shoulder, unable to follow through with his plan.

“Useless,” the Enigma said as he dodged the attack, posture calm and eyes half-lidded as Aiden glared at it while he passed. The moment happened so slow that Aiden felt as if this was a trick of the merciless monster.

However the young Guardian’s body was too fast to stop on its own. Originally, he had planned to stop when his fist came into contact with the demonic claws of the Enigma. He didn’t expect the Enigma to be able to dodge his high speed attack. The result of underestimating his enemy caused him to crash head first into the blackboard which was hanging on the wall behind the Enigma.
Bookmark here

The force of the crash rattled his bones even through his black lightning armor around his body. A jolting pain possessed his body. He could barely feel the warm blood trickle down his left cheek, so overwhelming was the pain. He didn’t dare to look down to see how much blood had fallen to the floor as he turned his focus back on saving Kudelia.
Bookmark here

‘I have to save her,’ he thought. ‘I won’t let anyone die in my presence again.’
Bookmark here

He attempted the same move again and had almost grasped his teacher this time, when a demonic voice started to invade his mind –
Bookmark here

‘Give up. You can never save anyone.’
Bookmark here

Suddenly he felt unbearable pain rage through his skull. He felt as if he was going to drop unconscious but he fought through the pain to be able to stand upright.
Bookmark here

His left eye felt as if it was burning. A lone bloody tear rolled down his cheek as his pupil turned red. His vision started to get blurry.
Bookmark here

‘Am I going to fail again?’ he questioned himself, despair starting to creep deep into his bones. He didn’t want a repeat of last time. ‘I don’t want to fail again.’
Bookmark here

The demonic voice echoed through his skull, sending shockwaves of pain throughout his body.
Bookmark here

“You are a failure, Aiden Kualasis. You always will be.”
Bookmark here

His vision started to swim and everything around him seemed to become distorted as the world around him was dyed in crimson red and then everything turned black. He dropped to the floor, unconscious.
Bookmark here


And the new chapter is finally up everyone. I am really sorry to keep you all waiting for this chapter. But don't worry anymore I will be posting chapter faster so that all of you can enjoy the story even more.
And please do comment and like. It really means a lot to me!! Hope you were able to find the entertainment you were looking for when you started reading this story!! 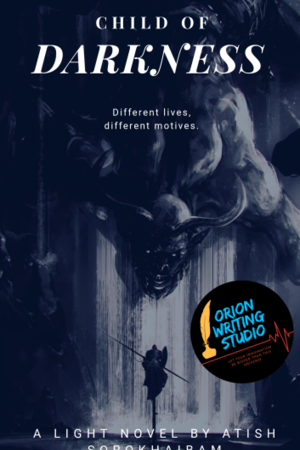