That night, his suspicions were confirmed. The moon receded until it was but a crescent. Walking as a human took so much time, he noted. He couldn't stay long...Bookmark here

The people had been rather distanced when he first arrived.Bookmark here

Who'd trust a stranger with nothing but a bear-pelt to cover his skin?Bookmark here

"Who are you?" a brave-looking man with toned muscles and tanned skin had asked, stepping forward.Bookmark here

"... Where are you from, Marion? You arrive from the direction of Lord Viktor's castle... were you thrown out of his service?"Bookmark here

That would be the normal conclusion, wouldn't it?Bookmark here

"I'm afraid to tell you that the castle has been attacked. I was lucky to escape with my life," Marion recounted, shuddering not from fear, but from shock over what he had done. The wolf's voice got weaker the smaller the moon was. As it was now, he could barely hear it at night. Even when he lost his mind under a full moon, some episodes of his doings remained, haunting him in his dreams. The figure of Carl, screaming, the gruff-sounding guard, holding his own against him, and the Lord and his family, hidden in the highest tower like the most delicious treats... he shook his head. His voice trembled as he continued to speak. He had to lie. "A beast broke in, I don't know from where, but it was like a shadow, claws like swords and teeth like daggers, its eyes red like blood. It walked like men and beast together, fused into an abnormal creature." He noted with delight that the villagers began to speak in panicked whispers, believing him. Just in case some of the people in that castle were alive, it was better if they escaped, too. Before the next full moon... "It moved with unmatched speed, besting the guards and knights at the castle with ease! If it hasn't arrived here, yet, I can only hope that it moved elsewhere..." Though it was already here! Because I am it! "I beg you, grant me shelter. I don't know if I can survive another night in the woods... I will move on as soon as I'm back on my feet! I want as much distance as possible between me and that place!"Bookmark here

The man who stepped forward was tense, scanning Marion, trying to find the lie in his spouting. There was none to be found. Marion merely glossed over the details of him being the beast.Bookmark here

"I can't help but notice the bear-fur on your back. Someone of your prowess, a man capable of besting a beast as mighty as a bear, should be able to survive in the wild, no?"Bookmark here

Marion knew where this was going.Bookmark here

It seemed like this man didn't believe him, as he should...Bookmark here

"I found the dead corpse of this bear in the wild... I believe it fell victim to the same creature that assaulted the castle." Marion slid it off, revealing the wounds he had suffered from the people at the castle and the bear. He hoped they weren't knowledgeable enough to discern the difference. He ignored the murmurs and his shame at standing naked in front of these people and offered it to the man who stepped forward. "If you look at the hide, you see the violence this bear fell victim to."Bookmark here

Repeatedly, with the discovery of each new hole, of each bite-mark, he looked at Marion, then back at the hide.Bookmark here

"No man could've made these wounds," he judged, "neither could a bear inflict them. What did you encounter in that castle?"Bookmark here

"As I said, a shadow in the form of a bear walking like a man, bulky and towering over even the strongest knight. It was a beast with eyes the color of blood, and the desire to kill. It bit everyone it saw, it crashed through walls and clawed to counter sword-slashes. Nothing could harm it, and it howled with the voice of nothing I ever saw..."Bookmark here

Marion remembered how he had first been described like that. It had been a shock to find out, as his bestial mind was more concerned with attacking people than with looking at its reflection.Bookmark here

A bear on two legs, towering over even the largest man. Laying eyes on it was enough to make one thing known. Death was inevitable.Bookmark here

What hurt the most was that it had been his best friend who told him how he looked.Bookmark here

It was entirely possible that, in truth, he looked even worse.Bookmark here

He didn't wish to reveal too much.Bookmark here

The man turned around, whispering with a group of wise-looking people, well over the age of adulthood.Bookmark here

They must be the elders of this settlement, Marion thought.Bookmark here

Their decision came down to them not trusting Marion in any way, and so he ended up in his current predicament...Bookmark here

A wooden cell to the back of the village.Bookmark here

His only company were the guards, make-shift militia equipped with pitchforks and torches. They could stand a minor chance with the help of fire, but who was he kidding? If they didn't let him out of here before the next full moon, they were done for.Bookmark here

At least they brought him enough food and gave him clothing... He wouldn't be starving like he had been in that cell with Carl...Bookmark here

Distant steps came closer, hurrying as the foliage crunched under his feet.Bookmark here

It was a militia, but instead of the usual exchange of posts, the militia currently guarding Marion ran away, too, leaving him alone.Bookmark here

Marion didn't know what to make of this.Bookmark here

He had been in this cell for a few days, yet, so he kinda wished they'd hurry up with their decision... the sight that greeted him when the militia did come back made him jump to attention, however.Bookmark here

They had many more people with them, donned in dented armor and equipped with weapons far above the militia-level.Bookmark here

"We are knights in the service of Lord Viktor," one of them announced, looking at him with an expression of distant recognition. "We wondered what had happened to you, as we found only one corpse in the dungeons... so this is where you went."Bookmark here

"He didn't tell us about this!" the militia insisted, wearing a frightened expression.Bookmark here

The knight waved him away.Bookmark here

"Don't worry. What he said about the beast... is true. I would've run away, too, in his position," he ensured, showing a stained smile. "Leave us!"Bookmark here

The militia quickly scurried away, leaving Marion alone with a dozen knights.Bookmark here

"We rode out after catching a break. I take it your village chief got the letter? To think that they still imprisoned you. Thought you could run away and escape your sentence, huh?" He kicked the cell, and another knight came forward to hold him back. He whispered something Marion didn't understand, and the knight who just kicked his cell cursed back. "I know, I know. You said the beast has slain a bear, too?"Bookmark here

"Yes, I found it in a cave."Bookmark here

The knights' expressions changed, then. They were obviously anxious.Bookmark here

"Then it is no wonder that our best fighters fell. How did you escape the dungeons, though? Tell us your story. It might lessen your sentence."Bookmark here

Marion thought that it was really unfair to just imprison him alongside Carl in the first place when they had no idea of him being... what he was.Bookmark here

"First, there was a noise... like scratching. The doors to the dungeons opened, and heavy footsteps approached our cell. Carl, being the hunter, heard it first. 'Wake up, Marion,' he said. 'Wake up. Something's coming.' I'll never forget his look at that moment. He was terrified, on edge. It moved closer, slowly and ominously until we could hear its heavy breathing. It had claws like swords and teeth like daggers," he said, repeating what he had told the townsfolk, "which twitched with excitement when it saw us. It sniffed our scent, then grabbed the prison bars with a bear-like hand... and ripped it out. He took some stone with it, and then it jumped us. Carl was the first to get hit, and while he screamed for help, I... I ran away! I came upon this dead bear and took its hide, as the beast grabbed me, ripping my clothes to shreds."Bookmark here

His voice gave out as the memories of him eating Carl came back.Bookmark here

How he plunged his teeth deep into his neck, crushing his bone, snapping his spine in half...Bookmark here

"How did you leave the castle grounds?" the knight asked calmly.Bookmark here

Marion noted that he had balled his fist.Bookmark here

"As I ran out of the dungeons, almost naked, I came upon a group of guards... or knights... I couldn't tell. They recognized me and grabbed me, but then the beast burst through the dungeon doors, bloodlust in its eyes... It wanted to taste us, to feast on us..." Marion shuddered, and he didn't have to fake it. "They let me go, engaging the beast. I just ran, leaving through one of the doors... I couldn't tell you which. The walls were deserted or stained with blood..."Bookmark here

The knight's knuckles cracked as he asked another question.Bookmark here

"Where did the beast come from? The dungeon exit... or the castle?"Bookmark here

Marion took a moment to catch his breath, then answered, "The castle."Bookmark here

He knew that he didn't go through the dungeon again, which meant that entrance was probably intact. Lying wouldn't help him, here.Bookmark here

The knight took all that information in, now violently shaking, an angry expression on his face.Bookmark here

"So it is true... I hoped it wasn't... that beast entered the castle grounds and we didn't realize it?! Our brothers and sisters died, got hurt, or bitten because we didn't pay attention?"Bookmark here

The guard from before tried to calm him down, again, but he turned away, cursing at the sky.Bookmark here

The other person in armor thought for a moment, then said, "You'll be coming back to the castle with us."Bookmark here

"You can't bring me back to that place! Nobody knows where that beast went, I don't want to go there again! Please, don't do this!" The guard opened the cell, approaching him. "I can't! You shouldn't- Oh..."Bookmark here

The last he remembered was the flat side of a sword meeting his head, and the lights going out...Bookmark here 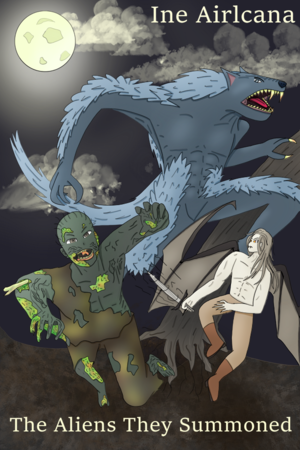