The rally ends after a handful of events, speeches, and performances put on by the Esper representatives of various clubs. The entire thing, though, seems to just skate right past the girls, each one thinking the exact same thing. Before long, they return to class, drift through the rest of their school day in relative quiet. At the end, though, they all have the same idea.Bookmark here

The lot of them gather around their homeroom teacher’s desk when all of the other students have gone. What they’re looking for, though…Bookmark here

Some kind of plan?Bookmark here

Almost certainly nothing Ms. Kelly seems at all prepared to give. Not after being blindsided by this just as much as they were. So many thoughts race through her mind it’s impossible to grab hold of any for long. One, though… one lingers for a bit.Bookmark here

Morioka. The teacher’s eyes drift to Mio, whose own gaze seems… distant. No, not just distant. The girl is clearly miles - lightyears - away. That’s when it all slows down and clarity finds her. These are her students and they need her help. Still, there’s no coming up with anything under conditions like this. Not on short notice.Bookmark here

“There isn’t anything I can do for you today that’d help. Anything more than usual might tire you out and make you vulnerable tomorrow.” Her voice then falls away to nearly inaudible. “…Hopefully none of you will be up tomorrow…”Bookmark here

No one else seems inclined to ask, so it’s Charlotte who puts up a hand. “What does that mean for today, then?”Bookmark here

With that, Kelly rises from her seat and makes for the exit. “It means you can all go home for today. As for tomorrow… we’ll see.”Bookmark here

Thus, she disappears through the door, leaving the girls standing around her empty desk.Bookmark here

As seems to be a developing pattern, Diana and Charlotte make no efforts to hang around, leaving Mio and Ragyou to walk together. Ragyou gets in a few stretches on the way to the station, loosening up after a long day. A long, troublesome day.Bookmark here

A total non-response. Ragyou continues walking, stealing glances at Mio through the corner of her eye along the way. It’s hardly difficult to imagine what the girl must be feeling. If it’s anything like the way Ragyou herself feels, at the moment…Bookmark here

“Man. It’s totally unfair, right? How they keep changin’ the game? And we just started to get the hang of workin’ together too…”Bookmark here

So many things jump out, right away. The head held down, the stiff movements… most notable though are the eyes. The thousand-mile stare is one thing, but the lifelessness… Gone is the shine that those grey eyes had only just begun to show in the last handful of days. So much work and here stands a perfect reflection of the girl as she was before they ever met.Bookmark here

Mio’s train finally pulls into the station as the two girls wait there in silence. Not a word - not even a whisper - peeps out from her mouth upon the time for her departure. She steps onto the train as the world of indistinguishable squiggles around her continues to hiss its static noise into her ear. Bookmark here

Then, just as the train pulls away…Bookmark here

“Heh?” Standing there, leaned forward and looking her right in the face, is Ragyou, wearing a tickled grin. “Kikuchi...san? This isn’t your…”Bookmark here

Ragyou stands upright, her hands folded behind her back. “Yup! I figure that since we don’t have training or anything…” Then she flashes a double peace sign with that sunlike grin of hers. “Let’s hang out today!”Bookmark here

For a time, Mio loses her ability to use any kind of language. Her vocal cords deny her. Her face freezes. Her body refuses to move. She has nothing to respond with. The conflicting feelings of her body tingling as if the whole thing had just fallen asleep and this strange weightlessness confuse her senses and twist her mind into knots.Bookmark here

Her unlikely friend, though, leaves her no time to adjust to this proposition. “I mean… we don’t know what the Class Rumble’s gonna be like, y’know? Since today’s the last day we’ll have before it starts, we should totally enjoy it a little!”Bookmark here

Mio’s only recourse is to stare. How many times has it been since they first met? Yet even now, Ragyou still finds ways to leave her in awe.Bookmark here

The pair take the train to the city’s commercial district, Mio allowing Ragyou to guide her along from one place to the next by the wrist. They hit shop after shop, buying cute accessories, weird toys, and silly little trinkets of no real use. All the while, Ragyou’s laughter and smile carry the evening.Bookmark here

They eventually wind up in an arcade. Even there, Ragyou remains the person to watch, playing harder than anyone. She pulls Mio into co-op games - racing, shooting, air hockey…Bookmark here

When they come to the crane arm, Ragyou proves to be a regular pro, getting no less than three adorable plush creatures, two of which she gives to Mio. Something about her own collection getting “out of hand.”Bookmark here

Mio draws the line at dancing, though. When Ragyou tries to get her up on the pad, Mio refuses to budge, abusing her powers to stay as firmly rooted to the floor as possible and holding her arms up in an X. Not that Ragyou blames her.Bookmark here

While Ragyou dances and Mio observes from the sidelines, the realization hits her.Bookmark here

“Bet you’re thrilled she wants to spend her time hanging around someone like you, eh?”Bookmark here

Mio has no answer for the little black reptile, speaking in her head. It does leave her thinking, though. Someone like me… Next to Kikuchi-san, I’m…Bookmark here

In time, Ragyou returns, sweating but victorious. The top score now hers, she stands proud, her hands on her hips. “There! You’re lookin’ at the new champ of this arcade! Wahaha!”Bookmark here

“Heh? Wow. That praise comin’ from you is kinda unexpected, Micchin, but I’ll take it. Ah…” One closer look, though, says enough. “This isn’t about the dancing game, huh?”Bookmark here

It’s difficult to explain, but at that remark, Mio shows more life than she had through the entire evening. Her head bolts up and she looks Ragyou right in the eye. “Don’t say that!”Bookmark here

Completely caught off-guard, Ragyou says nothing as Mio lowers her head back and stares at her own feet.Bookmark here

“Even if it’s a joke, I don’t like it… when you say things like that… Kikuchi-san.”Bookmark here

“Despite what we just learned, Kikuchi-san stays Kikuchi-san. People like that, who always shine their brightest, no matter what… I… really admire those kinds of people.”Bookmark here

Typically chatty as can be, Ragyou’s lack of words continues, her expression locked in a sort of stunned gape. At the same time, Mio refuses to lift her head. Not that she doesn’t want to. Gravity seems to simply be intent on working against her. So many black thoughts bounce around in her skull. Rather, one thought knocks around repeatedly.Bookmark here

What will Ragyou say?Bookmark here

Looking down like this, she can’t see Ragyou. She can’t see that light among the static. Only endless visual noise. Visual noise that’s soon met with actual noise.Bookmark here

She gets her answer. In rather loud fashion, no less.Bookmark here

Ragyou snatches Mio up and drags her into an almost suffocating hold. “You’re so cute I wanna hug ya!”Bookmark here

Ragyou refuses to let go, though, squeezing that much tighter, engulfing the girl’s whole head in her torso and arms. It’s no wonder Mio can’t really hear anything but the muffled sounds of her chatter and the arcade, itself. Certainly not when Ragyou drops her voice and breathes an uncharacteristically sincere “Arigatou… Mio,” from right over the girl.Bookmark here

Sometime later, the girls exit the arcade. Even as stars glimmer across the dome sky of the city, next to Ragyou it’s as if daytime lingers on.Bookmark here

“Heh?! K-Kikuchi-san, Ms. Kelly said we should get lots of rest…”Bookmark here

“Aww! But we’re havin’ so much fun, right? I don’t wanna call it quits yet!”Bookmark here

Fun. Mio thinks about it for a moment. The more she does, the more she finds this difficult to deny. “That’s…”Bookmark here

“See?! So let’s- ah.” Just as Ragyou takes Mio by the wrist and prepares to drag her off to some new place, she just barely swerves to avoid running headlong into an oncoming pedestrian. “S-soz! I totally wasn’t payin’ attention.”Bookmark here

The second Mio lays eyes upon the person before them, though, all of Ragyou’s warmth seems… utterly neutralized. A cold chill creeps into her muscles and joints as she takes in the subarctic gaze being cast upon her.Bookmark here

“O-oh, look, it’s Charlie-chan. What’re you doin’ out here at this hour?”Bookmark here

Charlotte turns her stare to Ragyou. “I’m on my way back from tutoring.”Bookmark here

“Eh? Tutoring? You have a tutoring gig?!”Bookmark here

“It’s for bonus credits. You can’t get into this city’s top schools without a top academic rating, after all. The extra monetary credits are also helpful, though.”Bookmark here

Ragyou zooms herself right up into her chilly teammate’s personal bubble. “Hey! Could you tutor me?! My grades are mega lame, right now!”Bookmark here

Charlotte winces as Ragyou invades her space, stepping back. “Then perhaps you should stop skipping classes and…” Her gaze travels up to the sign for the arcade from which they emerge. “Wasting time slacking off.”Bookmark here

“Ouch. Ya don’t have to be so harsh about it.”Bookmark here

“It’s only the truth.”Bookmark here

Ragyou, though, not one to let herself get put down, throws her arm over Charlotte’s shoulder, much to the girl’s irritation. “Bzzt! Wrong answer! So serious! You should seriously learn to take it easy, every now and then!”Bookmark here

“Don’t be ridiculous. There’s no way…” Charlotte knocks Ragyou’s arm off and proceeds on her route home. “Whatever. Do what you want. I’m leaving.”Bookmark here

Charlotte makes it all the way to the nearest station, waiting for the next train to the Outer Ring. Not another soul stands there with her on that platform. The silence proves problematic, though. Leaving only her and her thoughts.Bookmark here

Thoughts that loop, over and over again. Repeating that girl’s speech from earlier in the day.Bookmark here

Such a small fraction. Even in a city this enormous, that number is…Bookmark here 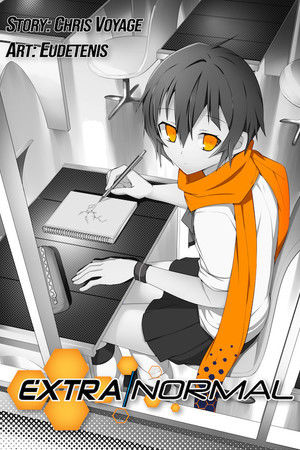