Chapter 1 - The Village of Destinies

In the village of Lucciola, a small settlement belonging to the long subjugated nation of Lumière, there was a tradition upheld for eons. A tradition which earned the village the moniker the Village of Destinies, that was the foundation for much of its culture and other long held traditions. For as long as anyone could remember, the women of the lord's household had a unique ability - to gaze into other people's futures. The first of these women became known as Futureseer, and this title was continually passed on to her successors. And so, it was decided, all residents of the village would learn of their destiny when they came of age, so that they may be set on the correct path.

This is the tale of one such girl, for whom fate had reserved a grand role, along with the destinies intertwined with hers.

"So, said your goodbyes?" the young man asked, watching his friend trudge up the dirt path toward him. The silver-haired girl wore a solemn look on her face, and without saying a word, threw the red backpack she was carrying into the back of the nearby truck that the young man was leaning on. "I'll take that as a no then, Alice."

"I couldn't do it!" Alice complained, pulling the top of her hair in frustration. "I left a note because I was too scared to see their reaction. I mean, how do you think your parents would react if you suddenly told them you had to go off and do dangerous things, Apollo?!"

She paused for a second, regaining her composure. "Wait. That's exactly what happened, huh. How exactly did your Dad react?"

"Well, he's known about my destiny for the past four years. He's had enough time to contemplate it. When I told him I had to go, he didn't even say anything. Didn't even come out from under the car he was working on, just gave me a thumbs up." Apollo chuckled slightly, recalling this.

Alice couldn't help but chuckle with him. "That sounds like your Dad, alright. Such a dedicated mechanic."

"You know, when I found out that my destiny was to be the adviser of some great monarch..." he walked over to Alice and looked deep into her eyes, lost in thought. He was so close that a strand of his brown hair was even grazing her forehead. This took Alice off guard, and she couldn't stop her cheeks from turning a little red. "I never could have imagined that monarch would be you. Hell, I was starting to think they'd never show up."

"Well, that's enough talking and thinking. We'll have plenty of time for that on the road. Let's go pick up the others!" Apollo exclaimed, noticing the look on Alice's face and quickly hopping into the truck.

It had been a week since she'd first heard it, and Alice hadn't been able to stop hearing the Futureseer's words on loop in her mind. Things moved quickly, once her destiny was revealed. Even the Futureseer's attendants, shocked as they were, had no time to rest.

"Bring forth these two, whose destiny has already been revealed." she spoke calmly, yet in an almost chilling way that could command even the most unmotivated person to move.

Suddenly, she was to leave the village on a trip, and she had a whole retinue to take with her. She and her group were even given newly designed clothes, commissioned directly from the Futureseer.

"Far be it from me to question her will, but what I don't get is... why would the Futureseer give us these custom-tailored clothes, and yet we're still making this trip in your Dad's truck?" pondered Alice, as Apollo drove off the forest path and back into the main part of the village.

Alice was surprised. "You don't know?"

"How the hell would I know?"

"Hmph. What a useless adviser."

"Is her Royal Highness displeased with the choice of transportation? Shall I request a horse-drawn carriage?" Apollo asked, in an exceedingly mocking tone.

"...Oh no. We haven't even picked up the other two yet, and I'm already sick of being in this truck." Alice muttered, staring longingly out the window.

The pair made idle conversation for a little longer, before arriving at the residence of their next companion. In stark contrast to Apollo's home, which was a cozy, cabin house situated in the woods, this was much more modern - situated in the village's main residential area. All of the houses looked similar, and Alice couldn't help but be reminded of her own home. Before she realised it, anxiety began to cloud her mind, but she forced herself to forget about it and jumped out of the truck.

"Huh?! THAT'S what we're travelling in?!" a rather attractive woman with purple hair cried out in dismay, gazing upon Apollo's truck. "That's hardly fit for royalty, is it?

A drop of sweat rolled down Alice's cheek. She was used to the woman's loud nature. "C-Ciela, calm down..."

"Now, now, no more comments against my Dad's truck, please! Only I'm allowed to complain about it!" proclaimed Apollo proudly, standing on top of the truck's cargo bed and striking a gentlemanly pose.

Similarly, Alice was used to this kind of eccentric behaviour from Apollo on occasion, too. "A-Apollo, just... get back in the truck, please..."

"How are we even going to answer the question of who gets in the truck, anyway? There's only two seats!" exclaimed Ciela, equally as loud.

Alice sighed, ignoring the question. "We're off to a great start..."

"Easily answered." Apollo began, a smug smile appearing on his face. "Which of us can drive, and will contribute to the group by volunteering to drive at parts of the journey?"

Ciela was the one to sit in the back.

"One more stop, and then it's time to hit the road, I guess." Apollo commented, starting the truck's engine.

Ciela groaned, and began talking to the pair through the truck's back window. "Do we really have to bring him along? Why's he coming, anyway? He didn't even find out his destiny."

"You're in no position to complain about that, Ciela." Apollo responded in a sharp tone. Alice noticed that once the woman had begun talking, the look on his face suddenly shifted to one of grave importance. "You won't even tell us why YOU have to come. What IS your destiny, Ciela?"

"Hey, we agreed we wouldn't press her on that, for now!" interjected Alice, with a worried tone, hurriedly switching her gaze between Apollo and Ciela's faces. "She said it was important, so let's just believe her."

Apollo fell silent, and Alice looked to Ciela once more. Alice couldn't hear what was said, but she was certain she saw her friend's lips move.

Alice hadn't seen their next, and final companion since their audience with the Futureseer. Both were the same age - with only a week separating their birthdays - and thus had been called upon at the same time. Alice went first, her grand destiny revealed with the boy in full attendance. Upon hearing what fate she had in store, he flew into a rage.

He refused to accept Alice's fate, and refused to hear his own. After all, any fate he was given would pale in comparison to hers. As the trio prepared for their journey, he declared he would come along. For reasons yet unknown, the Futureseer gave her blessing, and that was that.

His words were burned into Alice's mind, almost as much as the Futureseer's, and she wondered just how the journey would go with him by her side.

"You two stay here, I'll go get him." said Apollo, stopping the truck and stepping out. "If he answers the door to Alice, I'm kinda worried he'll sock her."

"Come on, he's not that bad." Alice quickly responded, before pausing for a second and looking at Ciela with a panicked look. "Is he?"

Apollo shrugged. "He'll warm up to you again at some point, his ego just... took a beating. As you well know."

Seeing Apollo leave to go and grab their final friend, Alice soon found herself lost in thought. "Why not him, though?"

What exactly do I have that he doesn't?

How do I know if I'm even good enough?

"Ah... huh?" the girl muttered, being pulled back to reality as Ciela poked her cheek.

A smile that made Alice just a little bit nervous had appeared on the woman's face. "Hey hey, Alice. Why don't we take the truck and go, just the two of us? Hee hee."

"Don't even think about it!" Apollo yelled, running over to the truck, having overheard their exchange on his way back. "You take my truck, I take your life."

The final member of their group, a red haired boy, ignored their banter and hopped in the back, sitting across from Ciela.

Once again, Ciela let out a groan. "Hey Naois, tell me again why you're here? I had almost completely forgotten you were coming. Though, I guess no one could forget just how angry you looked a week ago. Hee hee."

"I just... gotta see if what the Futureseer said comes true, alright? I don't care what my own destiny is anymore."

The frustration in his voice and face was clear, but everyone knew nothing they could say would help.

Naois took a deep breath and let out a sigh. His face softened a little. "Chuckle like that again though, and I'll see to it that whatever she said to you DOESN'T come true."

A simple smile appeared on Apollo's face as he started the engine. "Looks like we're good to go."

As the group descended into more idle conversation, they set off. To chase destiny, no matter the cost, no matter how far you must travel - this was the way of Lucciola's people, as it had always been. Where their journey would take them, and to what end, the friends did not yet know. Even so, even for the one who doubted themselves, even for the one who refused to meet their destiny, each of them knew - this was the path they must follow. Their journey had begun.

Naois tapped the silver-haired girl on the shoulder. "Hey, Alice. I wanna hear it again. What the Futureseer said."

Indeed, of course they'd wish to hear it again. Because for Alice, fate had reserved a grand role.

"In a world full of heroes who fight to free this nation each day, you will rise above the rest. You, from this humble village, shall rise above your humble beginnings, and go further than any of your brethren have before. You shall be the one to free this world from tyranny, to be the hero the people have sought for decades. For in the end, when this land is freed, the people will look to you, and you alone. In the end, you shall be the one to sit the empty throne -- becoming the Hero Queen." 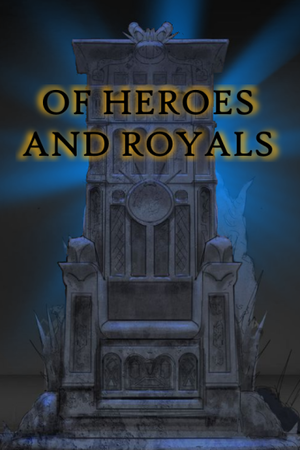