Wrong. The rails were wrong, pulsing to some indescribable rhythm. Thunder crackled in the distance, coaxing my eyelids to flutter open to the unfamiliar ceiling of a train car.

What was that? I felt although I had just forgotten some nostalgic memory within a dream. The scent of lilac mingled with spring rain, receded as soon as I noticed it. A person? Something was missing. The cold floor I laid upon shuddered as the train's rhythm became normal.

Perhaps I only thought it was awry. Still half asleep, I sat up to slam my head against something. I cursed in harmony with the female body that collapsed back down with me.

I winced.
A set of hazel eyes hovered above me, their pupils seemingly endless, pulling me inside. My entranced visage and the age floor we laid against reflected perpetually, adrift in her irises.

They bored deeper into mine, unnerving me. It was as if she saw what had just slipped from my mind, and drew it away.

Hearing my name again brought me to my senses.

"I told you not to push yourself, idiot," her breath fogged my glasses as she spoke, blurring my sight.

"Did I hurt you during this episode?"

"Just yourself, you fell asleep standing and tripped over your bag before I could catch you," she motioned over to my belongings strewn across the train.

I anxiously searched the room for any observers to no avail. A wave of relief washed over me. I loathe the attention that comes from my narcolepsy and the situations it creates. More so the pity of strangers and the questions they ask about my condition. I rarely get involved with other people due to the difficulty of making an unflubbed greeting. I cringed as I remembered the time I fell  asleep during my introduction in high school as a transfer student. Perhaps I wouldn't be on this regional train to Iwate if I was a normal person.

Ayame rose and offered me a hand up, pulling me into an embrace. Lilac enveloped me, lifting my disheveled hair to examine my forehead, and filling my head with a warm vertigo.

"You're better off here than alone at your apartment," Ayame said, attempting to calm my nerves.

Oh great, yet another reminder to be ashamed.

I couldn't find a job after graduating college. Or rather, no company needed me. After all, an employee with a humanities major that uncontrollably sleeps on the job is useless. I had only gotten it out of hope that this wouldn't be the case, that it would all work out. I should've expected this outcome. Returning home under the care of Ayame, just as directionless as when I left.

The sky cackled in agreement.
I knew it was mocking me.

"Its just as well. Life in the countryside will be an improvement from Tokyo. I've been understaffed at the family store ever since my mom left. Your help would be appreciated."

I gathered my baggage in silence. I felt guilty. Why must she do this too? By returning I was going to give Ayame more work. No change in scenery would make me any more needed.

We sat side by side, watching the dusk peak through the subsiding summer squall. Small raindrops began to slip down the window pane, collecting images of the sparkling paddies.

"I hate this nostalgia," I muttered under my breath.

I turned to see Ayame watching me attentively as if I was a child speaking nonsensically, nodding without listening. She always did that. Even though I'm a year older than her, she always treated me like I was her younger brother who needed to be constantly cared for. Now though, it seemed although she was lost in a far off place, locked away by her irises. A world of regularity that I could never glimpse at.
A regular job.
A regular home, with with floors unladen of convenient futons.
A regular commute on trains, with no public embarrassment.
A regular aspiration.

Why does she burden herself with me?

No.
Not quite right.

My eyes felt heavy.
Another episode?

"Ayame, I feel another one comi-" I stopped short, slumping over to be caught and rested on Ayame's lap. Her hazel eyes watching as I drifted off into my ever present abyss.

Whispers incessantly echoed in my head.

Game of which there is no winner

The choir crescendoed to an abrupt stillness.

I gained consciousness in the kitchen of my family home.
Alone.
Desolate.
Empty.
I knew it was just a dream.

The traditional kitchen was lit by a single lantern, its light spilling onto the road and rice paddies which now glimmered errierly as if they illuminated themselves. No shadow shifted under the moonlit clouds adrift in the mountains. though it was a cool summer night the forest behind the house was dead silent, as if it was the middle of winter. No animal or leaf stirred. It was as if the whole would was asleep in a tranquil slumber, and only I had been awoken.

I gazed out from the open shogi at the unchanging, untouched world created by my mind.
Wrong.
It was wrong.
I knew it.

This was not the countryside I remembered.
Something was missing

Was it the light?
The deafening stillness?
The-

I found myself wandering into the night, with no memory of when I had risen. I stopped as I reached the edge of the forest behind my house. The moon, obscured by mountains, cast long shadows that bled into the consuming depths of the woods, reflecting the darkness that gazed back into me.
Something was there.

A path stretched into the shadows.

I hesitated, remembering that I was asleep on a pillow of lilac. I could wait for the dream to end and return to Ayame.

A spark of light emitted far off on the trail, calling me. Entranced, I stepped into the lumbering trees in search of its source. 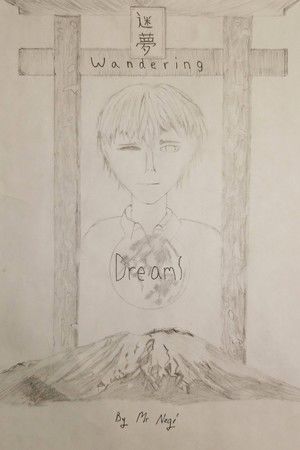