Rascal Does Not Dream of a Christmas Bond

Only the dim light of street lanterns through the closed curtains and the small LED display of the alarm clock lit the room so that Mai could see her boyfriend sleeping. The clock displayed the time and date as usual: 23:00 and 19th of December. Sakuta fell asleep early the last couple of days due to the unusually high amount of studying they did together. This pensum of course was nothing new for Mai so she always had a bit more energy left in the evenings, granting her precious time to look at her boyfriend without the risk of a snarky or perverted comment. Of course, she loved their banter, but sometimes she preferred the simple silence of the night, not that she’d ever tell him that openly of course.
Suddenly, the innocent look on Sakuta’s face vanished, his body began to shiver. She first noticed it the night after Futaba visited but he never brought these nightmares up, nor did he ever answer her questions on them directly. With each passing second, each shiver and each unclear mumbling, Mai grew more worried. She knew those dreams had something to do with the nightmares. And Futaba’s text message didn’t help much either. “Until he opens up, you can’t do much besides being there for him, ensuring that you won’t leave him”.
“Mai, no!”, Sakuta’s voice cut through the dark, not only scaring her but also himself as he woke up immediately after the scream.
“Sakuta! Is everything alright?” In the moment of worries, she even forgot her usual tempered behaviour.
“Wha- Where?” Mai pulled the confused Sakuta closer, comforting him in a hug.
“Shhhh. Everything is alright now.” She felt is muscles loosening up again as his mind slowly arrived in this reality again. “What happened?”, asked Mai. Now she knew for certain that he dreamt about her. There was no hiding it.
“It’s alright”, said Sakuta. She could practically hear his defences rising with every word he spoke, “I’ll handle it. I promise.”
“But-”
“Please, let me handle it.”
Never had Sakuta interrupted Mai purposefully. What did he see in his dreams that was so horrible, he didn’t want to show her? But now wasn’t the time for such questions. At least not openly. “Okay...” she answered, not being able to hide her disappointment.
Even in the dim light, she could see how Sakuta’s shoulders sagged down a bit. But still, she was done allowing this to continue. She wouldn’t let Sakuta suffer any longer, no matter how much he didn’t want her to be involved. She needed to start taking action no matter how much she was used to Sakuta handling every adolescence syndrome. But that had to wait till tomorrow. Or rather today - the clock already displayed the 20th. Now, all she could do was lay back again and pull Sakuta down with her, who was still too tired, too anxious to make any comment about how close he was to her. For now, they were just a normal couple cuddling until sleep overcame them.Bookmark here

Two day passed by, and Mai was enjoying herself quite a bit despite the situation the syndrome put them in. Or rather especially because of it, since she got more time to spend with her loved one. She managed to get him to study for college entrance exams even though he still had a year's worth of time. Maybe that was why the bribe was necessary. The rest of the day, they spent cooking and relaxing, something Mai wasn’t very used to after all her time in the show business. Thus, a lot of energy went unspent and kept Mai awake until late in the night. Long enough to start thinking about the here and now, as well as the past, and the future. A slight smile managed to get through her usual calm facade while she was thinking about her future with Sakuta. They might only be high schoolers right now but one day, they would be adults. With Kaede – the new old Kaede – being able to go to school with no trouble, there wouldn’t even be the ‘problem’ of a house-sitting sister, not that Mai was very concerned about that. She liked Kaede, both old and new, but sometimes a little bit of privacy wasn’t too bad either. Something Sakuta would make a comment about for certain if she ever told him that out loud.
Speak of the devil, as soon as she thought his name, he grew uneasy next to her. Another nightmare was on its way, she could see the fear on his face, which was illuminated just enough by the LED clock. The display read '01:42 on the 22nd of December'. She saw his eyes twitching behind the closed eyelids, and he started to mumble the same words again. She could definitely hear her name mentioned in it. It was the same dream as last night, but it seemed to be getting worse with every second that passed. His legs started twitching too, as if he was running, before he said in a voice that was more shouting than anything else “Shouko!”His whole body twitched, as if he jumped in his dream, and then he was calm again, but only for a moment. Mai reached out to him, to wake him up, to release him from the suffering, but his next words made her stop in her tracks: “Mai, no! Please, don’t be dead!”
With those words, his eyes sprang open, still unsure where to look at in this new area. It took a moment until he realized that he was back awake again, covered in the sweat of anxiety, and his girlfriend staring at him.
Mai knew she should’ve interrogated him as long as he was still confused, but she couldn’t bring herself to do such a thing so she just drew him into a tight hug.
“It’s alright”, she said, “I’m here with you. I’m fine”
“Wha- what happened? Where am I? You just got hit by a c-”
“I got hit by a car?”, she asked, continuing the sentence where Sakuta interrupted himself.
“J-just a bad dream. Nothing to worry about, Mai.”
His voice had nothing of the usual sharpness, there were no sarcastic undertones. He was just trying to fabricate some excuse, but Mai was determined to not let him get through with it a second time.
“Sakuta, please. Tell me what happened. I can’t watch you having the same dream night after night helplessly. Let me help you.”
Her usual calm voice had a different tone now, and Sakuta realized it. He was always good at knowing when she was acting and when she was honest. And the helplessness and anxiety in her voice weren’t played one bit.
Silently, she listened to her boyfriend telling her about what happened. She listened to the whole story about an alternate timeline, about Sakuta knowing a girl called Shouko, and about herself, dying in an accident that should’ve happened to her boyfriend instead. She listened to the absurd story of Sakuta travelling back in time to save both Mai and his past self from dying.
After he finished, there was a new kind of silence between them. It was the first time for Mai so openly seeing Sakuta in despair. Even when he was depressed from Kaede regaining and losing her memory, she didn’t see this side of him. She saw on his face that he had recognized the change too, there was a glimpse of insecurity showing in his eyes, before he started talking again: “I know, it sounds crazy, we are living in an alternate timeline and all but-”
“I believe you.” She cut him short - there was no need for apologizing or making explanations. She had seen the syndrome causing doppelgängers, body swaps, and of course, her own problem - disappearing. Something she dreamt of only very rarely nowadays, thanks to Sakuta. “I died on the 24th of December, right?“ She saw how Sakuta shivered at her mentioning of it, but she continued nonetheless. ”So we still have two days left. How about we talk to Futaba tomorrow and figure things out from there?”
Sakuta nodded silently. He still wasn’t used to not being in command, but he was also too tired and anxious to say anything against it. Seeing him like that made Mai sad. She wanted to have the old Sakuta back, even the perverted jokes, but she had to accept that sometimes, even Sakuta couldn’t bring himself to make such jokes.
She drew him close again, resting his head against her chest, stroking through his hair gently. Mai could hear his breath becoming calmer again, the uneasy look on his face gave way to a more peaceful expression. She held him like that until she fell asleep herself, long after Sakuta passed out. Bookmark here 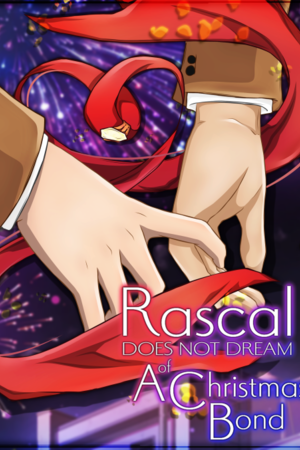 Rascal Does Not Dream of a Christmas Bond

Author:
Knights of the Bunny