Once upon a time, there was a young boy named Bill. Bill liked day but not night. He liked day since it was bright. One day, a jay rested on a tree branch and watched Bill. Bill looked to his right and saw the jay. The jay flew away, and Bill continued walking on the sidewalk. Then, Bill stepped on something jagged, and fell into a big, pitch-black hole. Bill looked around. He saw light, and was about to do a jig until the light suddenly disappeared. Bill also noticed a bird chirping. Bill said, "Maybe if I yell, people would hear me and get me outta here." Bill yelled and yelled, but no one came. The only thing he heard was he yelling echoing. Bill touched the wall, "PECK!" Bill felt a slight pain in his finger. The chirping grow louder, echoing more than Bill's yelling. Bill searched his pocket. He found two seeds. He toke one out and waited. Then, something jumped on his hand. He noticed it was the jay. Bill, with all his might, he ran straight until he saw a very dim light. There was soil under the light, and there was water all around the soil. "Maybe," Bill thought, "I could plant this seed in the soil." Bill put the seed in the soil, suddenly, a huge beanstalk popped out. Bill smiled, and he climbed out of the hole. When he was out of the hole, it was nighttime. Then, two red eyes appeared in the night. "I think I should run," He said. So he and the jay ran, and the red eyes followed his every move, without even blinking. The end?Bookmark here 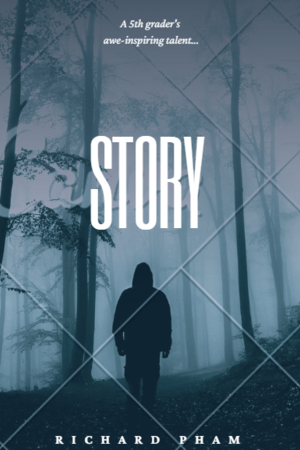