Manabu Akechi. I’m born in the 21st century, through a loving, supportive and a fairly rich family. I’ve lived quite the blessed life, but blessed doesn’t always mean a colourful. I’ve lived for over 140 thousand hours, or about 16 years, yet for most of my live it has been dull and grey and filled with dissatisfaction and now…. Regret.Bookmark here

Though in these 16 years people have acknowledged my worth. I’ve achieved some impressive feats, getting top marks, number one student in middle school at the finals, and finally getting into Shinagawa Tokyo Metropolitan High. Bookmark here

For most people, that is a source of jealousy, and I do indeed understand why. I’ve poured sweat, blood, tears and thousands of hours for achieving this. And yet still I feel an incredible amount of dissatisfaction in the present, and a fragility for the future…Bookmark here

Growing up, I’ve never been that talk active. I had difficulty of expressing my emotions to someone that isn’t my family. I’ve had noticeable difficulty on interacting with others and generally being very awkward.Bookmark here

No, I can feel emotions. After all I’m still human. I’ve confessed to someone, I have fell in love. I have felt sadness, joy, wrath, jealousy and disgust. It’s just that I’m incomplete and there’s this empty void in me…Bookmark here

Let’s say we’re cooking for perfection, and being smart is a recipe for it. I have my grades and intelligence as the main ingredient, but if you don’t have spices or complementary ingredient it’s hardly and far from perfect. And it’s pretty clear what the missing ingredient are.Bookmark here

I suck at making friends and socializing with other people. I barely have friends... I only have one friend, and it’s a childhood friend from like what? 10 fucking years ago? Yeah… I’m socially inept, and was an asocial person…Bookmark here

For context let me add a little backstory. When I was in kindergarten I had a childhood friend. Sadly she moved abroad due to family reasons… And so, as she was a sweet and loving friend. Without her I’m a blank canvas, she was the one that put colour into my life, the artist that paints the canvas.Bookmark here

And so as she left, I was too shy to make new friends. I’m left all alone. And mainly only interacting with my family. But shyness wasn’t the only thing that stopped me from making friends… Bookmark here

You know, a person simply does not stray away from entertainment like light novels, manga or anime… I was too obsessed with fantasies, and acting like I was a “lone wolf” or some shit edgy person some of you also wanted to or had acted like. Acted like I am some sort of an energy conserving, non-emphatic, mysterious asocial person that is smart as fuck or something out of a protagonist from a school themed anime/manga/novel.Bookmark here

I basically acted like that from elementary until I graduated from middle school. Thinking that friends are a hindrance. They’re spending time with their friends and deleting their brain cells, stuck being dumbasses and not devout their time into studies.Bookmark here

Yeah it’s a pretty miserable way of thinking. And a miserable way of life. Sheltering yourself away, thinking that if I interact with them, I’d get dumber or being influenced by their bad behaviours… I was a miasma of misery for that empty 10 years… Bookmark here

Point is, I became asocial and too serious at that age. I rather study and consume sophisticated books rather than enjoying my youth. Though yes I know first-hand on how important to devout your life into education, and selling your soul to the Japanese Education System.Bookmark here

But to the point of having no friends? Really? That’s just sad and miserable. And looking back just a few months ago. I cringed myself… it’s disgusting how much I think having friends is a hindrance.Bookmark here

And look who it is now, thinking that I also am wasting my youth and potential. Well, unlike most of them, I’d probably be the better end product. Though the end product I’ll turn if I still walk on that path is imperfect to say the least.Bookmark here

At first it was shyness that rendered me from being open to others… and then I became asocial voluntarily through bad influences and weird fantasies from entertainment…. And now I’m socially inept because I'd shy away and caged myself in from interacting with others…Bookmark here

Being smart but socially inept is like eating cereal without milk. I mean you can still eat it, it’s edible, but it’s not that good, it’s incomplete. It’s like eating peanut butter jelly sandwich, without the jelly, there’s a special something that’s missing. It’s incomplete and imperfect.Bookmark here

Truly lots of potential have been wasted. And no, I don’t blame my parents. In fact I think Mom and Dad is a very supportive parent. They’ve encouraged me numerous times to make new friends. Yet I was being a delusional anime protagonist wannabe... Pathetic me.Bookmark here

Ahh… I truly miss the olden days of kindergarten now. Or to put it simply, I miss having friends. I want to have friends… Maybe play video games together? Study together? Watch movies together? Or maybe even a girlfriend or a boyfriend? Getting all romantic, flirting with each other and spend affectionate and lovey-dovey time with my partner?Bookmark here

That feeling of nostalgia pushed me into trying to change, but that wasn’t the only variable in pushing me to change myself for the better, to walk the path of change.Bookmark here

In the 21st century, it’s not an era of competition, rather it’s an era of collaboration. Leadership, interpersonal intelligence and public speaking is worth the same as your grades in school if not more in certain situations. And I’ve seen first-hand the benefit of them.Bookmark here

I have a big sister, her name is Akane Akechi. She’s very similar like me, we’re nerds, we’re geeks, we’re smart and basically everything else in the world we’re almost a carbon copy of each other.Bookmark here

There’s a few things that separate us though, well yes she’s a girl I know…. That’s one of the difference. But let’s not get off-topic.Bookmark here

She’s an influential charismatic leader and is very good on interpersonal relationships. What I’m saying is, she’s perfect… She’s the closest thing to perfect…Bookmark here

She got accepted to one of the top university in Japan. That’s a commendable achievement. She’s very smart, have good leadership and have unparalleled interpersonal skills. She’s active in organizations, while still being the top student. She's very cool and caring too!Bookmark here

To put it simply, she’s destined for success. Well I personally don’t believe in destiny and fate. And I don’t believe that my life is predetermined by some all-powerful force above us. Rather, I believe this is me, my life, so the one who is shaping destiny is me, Manabu Akechi!Bookmark here

I had fallen into countless depression and existential crisis of how I didn’t utilize the potential I had. It was a dark time, I didn’t like my mind back then. Spring break was driving me crazy. Everything felt heavy, I felt like I was trapped in a cage, limited by that cage…Bookmark here

And on a faithful day, something came up in my mind. Mostly credited to my supporting and loving family… Thanks Nee-chan… Thanks Mom… Thanks Dad… Ekhm let’s not stray off-topic.Bookmark here

Through the desperate and miserable time, fighting against depression and self-hatred, with the support of my family and the backing of myself. At the start of the spring break, a life-changing thought appeared in my head. It’s like having post-nut clarity, you get all sobered and you’re attached back into reality. I was enlightened, it’s as if Jesus Christ himself gave me a pat in the head.Bookmark here

You can change! It all starts from small things! The only one limiting you is yourself! And a million whole other things that needs to be addressed… (In my context, and just mine it was only myself. Though it’s not all the same with other people sadly…)Bookmark here

Today, 5th of April 20xx. The first day of high school. I’m going to flip a new page on this book and write a new chapter of my life. It’s time to change, from being the bland anime protagonist wannabe Manabu Akechi I was, into a more complete person, an honours student that deserve acknowledgement, and live a more colorful and enjoyable life. Bookmark here

Or so, that was what I hope it will turn out. And you know, life often deal a bad hand at you. And you can’t do anything about it. You just have to suck it up, but that’s not stopping me! I’ll be resilient and shine through all this cloudy and gloomy life with my newfound resolute personality!Bookmark here

I’ll rewrite myself, from a gloomy edgy emo phase of socially restricting myself on my own fantasies. Into a more open, complete and colourful person! My journey in achieving self-improvement on my weirdly optimistic high school life, not like any other common school genre protagonist it’s a one of a kind story. Let’s go! The journey starts today! It’s Akechi’s Adventure!Bookmark here 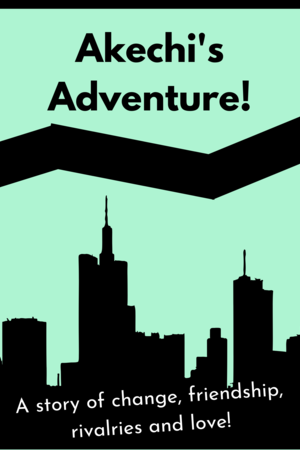