Game of Height. Sport of Skill.

Halftime arrived with Galveston Tech leading Manhattan University 67-51. Manhattan’s star player, Odai Beckham Jr, was in a serious predicament, sitting on the bench with three fouls. Manhattan’s coach was now beside himself at this turn of events. He was yelling curses and insults that would’ve earned Odai a week of getting his mouth washed with dishwasher soap and washing machine detergent.Bookmark here

“I didn’t intend to foul him, coach,” replied Odai calmly. “The guy is smart. He uses his subpar height to his advantage against much taller players like me. Not to mention his handling, shooting, and passing are elite.”Bookmark here

“THAT DOESN’T CHANGE THE FACT THAT WE’RE DOWN BY SIXTEEN POINTS AT HALFTIME! AND YOU’RE WARMING THE BENCH!”Bookmark here

“Put a different man on him, coach. As a big guy, it pains me to say this, but the fact is that he has the advantage over anyone much taller than him,” advised Odai.Bookmark here

As it turned out, Cameron needed more than just luck.Bookmark here

Manhattan didn’t have another scorer and defender like Odai, and soon, the duo of Ichikawa and Chad Brown started piling on the points and wresting the game from Manhattan’s grasp. Odai couldn’t take it anymore.Bookmark here

Cameron managed to stop Ichikawa from scoring, but the Japanese point-guard was now passing the ball to exactly the right teammate at the right time. Bookmark here

“That’s it, coach,” he said determinedly. “Put me back in.”Bookmark here

Odai re-entered the court to a loud cheer from the gym. They were tired of Galveston running the show on their home turf. If anyone could stop Galveston Tech now, it was their main man, Odai Beckham Jr. Bookmark here

Odai now faced his new defensive matchup, Chad Brown. Unlike the sly fox Ichikawa who had outsmarted him thrice, Chad was much more predictable and his movements were easily matched by Odai. He held Chad in absolute lockdown and could see through all his attempts to escape.Bookmark here

“Of course I know his movements,” thought Odai. “We’re both power-forwards!”Bookmark here

In the last minute of the third quarter, because of Odai’s absolute clampdown of Chad Brown, Manhattan had slowly but steadily crept back into the game. They now trailed by 5 points, the score being 79-74 in Galveston tech’s favor.Bookmark here

Cameron threw a powerful, high, lob over the basket. Odai flew into the air and caught the ball one hand. Chad leapt into the air too, trying to block Odai from dunking. But, Odai was in a class of his own. He slammed the ball with such ferocity that Chad’s arms were blown back, but not after touching Odai’s hand.Bookmark here

“AND ONE!” howled Odai delightedly, much to the joy of the audience.Bookmark here

Odai stood at the free throw line. The ref threw him the ball. He breathed deeply, trying to concentrate. He then took careful aim and took the shot.Bookmark here

“Oh no…” he thought instantly.Bookmark here

He had never been a good free throw shooter. Bookmark here

But, like a lynx, he caught his own missed free throw before anyone else. Then, he slam-dunked the ball powerfully into the hoop.Bookmark here

The score was now 79-78.Bookmark here

Chad Brown shot a poor three-pointer that missed badly. Odai grabbed the rebound and sprinted towards the other end. Just as he was about to try and dunk it, he spotted Ichikawa in front of him, ready to take a charge and draw and offensive foul.Bookmark here

Odai suddenly stopped running and jumped straight up. He raised the ball in one of his arm and looked at the defender.Bookmark here

Odai pushed his arm upwards and put up a floater. It went into the basket with a satisfying SWISH. Bookmark here

Odai looked down at Ichikawa. “Basketball is the game of giants, man! It’s a sport of height!”Bookmark here

He’d never been a trash-talker. He’d always let his game do the talking. He’d let his work ethic write volumes about his impact on a game. He usually helped his opponents up after dunking on them or pushing them down. But for the first time, he’d acknowledged the 5’4 Ichikawa as a legitimate threat. His competitive spirit sent his internal pistons into overdrive, ready to win.Bookmark here

Ichikawa was the first player he'd ever trash talked, or acknowledged.Bookmark here

Ichikawa ran up to the other end of the court. “A layup?” mused Odai. “I don’t think so!”Bookmark here

Odai’s long legs covered the entire court so fast that Ichikawa’s brain took two extra seconds to process the fact that he was about to get blocked. But, instead of going for a layup, he ran to the corner to shoot or pass. Odai followed, determined to block him and keep the lead.Bookmark here

80-79 with Manhattan up front.Bookmark here

Ichikawa tried to drive to Odai’s right. But Odai was faster. He blocked the entire lane of Ichikawa, giving him no space to move.Bookmark here

This was what Ichikawa had been waiting for.Bookmark here

He stopped his run and stepped back with such dexterity and smoothness that Odai was left many feet away from him, courtesy of his long legs. Ichikawa then shot a corner three pointer. Bookmark here

The ball didn’t even touch the rim as it went into the hoop with a SPLASH.Bookmark here

“I humbly disagree, Mr. Beckham, with something you said earlier!”Bookmark here

The score was 82-80 in Galveston Tech’s favor.Bookmark here

“Basketball isn’t a sport of height. It’s a sport of skill!"Bookmark here

Well, the exam is over! And ‘64’ will continue as usual with one chapter a day.Bookmark here

Thanks for all the love and supportBookmark here 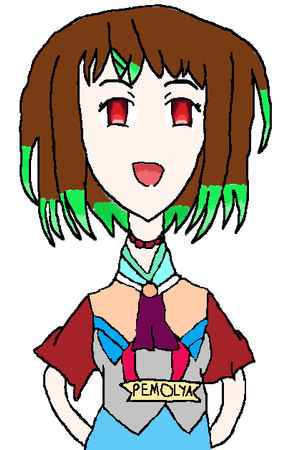 A kiss for Yandere Ojou- sama