Have you ever wondered why you dedicated yourself to become someone that your family expected you to be? Cause that’s the person I am. Ever since I was born, I know that I have to strive for a better life to have a job. My parents live in poverty before I was even born, although we had a nice peaceful life, we were one step closer to being homeless. Seeing them suffering just makes me want to work hard for them, they worked so hard just for us to have a nice meal at the dining room table, I want to repay all of the hard work they gave to me, their only child.Bookmark here

You could say that I’m a workaholic since I spend most of my time taking part-time jobs and learn everything about having a business. All in my head is just work, that’s why I didn’t have a lot of friends throughout my school life till I graduated. I became a valedictorian in middle school, high school, and college. My parents are so proud of my achievements, it’s just driving me to be someone that my parents want me to be, getting a real job.Bookmark here

Well, let’s just say that I didn’t sign up for this job.Bookmark here

It was a peaceful night until a group of High School kids started to cause a ruckus near this haunted tunnel, The Inukane Pass Tunnel. These kids are going in this haunted spot to record some footage as a challenge. What they didn’t know is that one of them has already sealed their fateBookmark here

“Whatsup guys, It’s Bakajanai again, kyu*, and welcome back to another challenge video guys and today we’re gonna be taking a look at the haunted Inukane Pass Tunnel” This blissful female content creator by the name of Bakajanai, introduced herself to the camera along with her friends coming over o the camera, introducing themselves. Except for one guyBookmark here

“Iida-kun!” She called the one guy who’s just listening to some music from Anime openings he liked on his headphones, the music he was listening to was not that loud so he was able to hear what she saidBookmark here

“Oh, Nakano-chan” He took off his headphones and walked closer to Nakano “Whatsup?”Bookmark here

“I appreciate that you prepare all this stuff for me but why can’t join us for this video?”Bookmark here

“Well, you know I can’t right?” He patted Nakano’s head “Helping you is enough for me to make myself happy” He smiled as he continues patted her headBookmark here

He let go, only to see a flustered Nakano, she covered her cherry-red face away from Iida. Iida Akihiro and Meiko Nakano are childhood friends. Iida just doesn’t want to be in trouble so he’s just fine just helping Nakano reached her dreams.Bookmark here

Nakano herself is protective towards Iida since he’s usually getting bullied in school. She’s the cheerful type of girl who loves to see everyone smile. She may be the most popular girl in the academy but she’s always hanging out with Iida. Her goal is to be a popular influencer, she goes to extreme lengths just to achieve it and Iida just helped her out of it. That’s why they’re in the haunted Inukane Pass Tunnel and Iida himself prepared the tricks.Bookmark here

They pretty much look like siblings to anyone’s perspective, at least that’s what Iida thought. Ever since middle school, Nakano has started to grow feelings for Iida. She’s trying to disregard these feelings but no matter what, Her feelings grew even more as they became more closer.Bookmark here

She tries her best to hide her feelings in front of him but the thing is, Iida already knew that Nakano has feelings for him. He’s not dense, he knew it since they’re so close all the time. Truth be told, he also has feelings for Nakano, he‘s just too good at hiding his own feelings but overall, he doesn’t want to rush things, he learned his lesson when he decided to confess to someone, and he felt like he was thrown under the bus. Nakano heard about this and she decided to take it slow since she doesn’t want to ruin Iida’s trust.Bookmark here

Even though Iida wants to be alone, it can’t be helped if he’s always being dragged by Nakano’s plans on being successful. But he doesn’t seem to be annoyed by it, since Nakano has only been the closest friend that he has, and he deeply cherishes his memories with her and plans to confess to her soon.Bookmark here

As for Nakano, she wants to be friends with Iida since it was her original goal to make a lot of friends when she was still a child. But the more she hangs out with him, the more she falls for him. It’s not just because of his looks, but more of his simplicity and his tendency to help others without being asked, just kept her imagining being a great father.Bookmark here

The two may almost act like a couple to the people in public but they're not actually one.Bookmark here

“Ugh, I’m so thirsty” One of the students in the group groaned out of thirst, Iida decides to take action and started walking to find a nearby vending machineBookmark here

Nakano suddenly tapped Iida’s shoulders, as he turned around, he saw a smile that couldn’t deny

“Why do it alone when you have me” She chuckled as she continued smiling.Bookmark here

“Uhm, what about…” He paused as the smile slowly melts his heart, Nakano knew that Iida doesn’t say no when she does this, Iida couldn’t help but he just looked away as he nodded, which made her squeal with happinessBookmark here

Nakano jumped on Iida’s right arm as she kept humming at a song she liked, He suddenly felt that he might be the first one who would confess to her before her. So, he’s not gonna let his guard down, he patted Nakano’s head, which to his surprise, she started blushing.Bookmark here

The two walked together on the road as they saw a nearby vending machine at the other side of the road, not knowing their relationship are about to end from a certain vehicle.Bookmark here

The two just got the drinks out of the vending machine. Nakano kept clinging to Iida, which made both of their hearts skip a beat, trying not to change their expressions but the two feelings are completely touched.Bookmark here

Iida looked at Nakano and see that she’s blushing while keeping her usual smile. He touched his face and realize that his face is hot, meaning that his face might be read too. Bookmark here

“What’s wrong Iida-kun? Nakano looked at Iida and he looked away for a moment to hide his red face from her. Once he calmed down, he looked back at her.Bookmark here

“Nothing, I was just taking a breather.”Bookmark here

“You’re ignoring me?” Nakano pouted and playfully clings to Iida even moreBookmark here

“Uhm... Nakano-chan,” Iida said while his voice stutters and his whole body shivers from the softness of Nakano’s breast. “I think this is enough. It’s not like all of us are gonna drink it.”Bookmark here

“Who says we’re gonna drink all of them.” She chuckled, as she boops Iida’s forehead, hinting at something that Iida doesn’t know while playfully twirling and tip-tapping on the ground, as Iida placed the drinks in the plastic bag.Bookmark here

Iida seems to notice that Nakano’s been playful when they’re alone this day, he thinks that this is one of Nakano’s plans on confessing her feeling to him, which Iida intentionally ruin it since he’s not ready. This happened a lot of times since they went to high school.Bookmark here

“What are you fazing out for Iida-kun,” Nakano said as she gave a sweet smile to Iida “Let’s go now, they’re waiting, hehe” She let out a soft laugh that made Iida blush.Bookmark here

“I know I know, coming” Iida went closer to Nakano as she suddenly holds his hands while smiling. The two walked together on the sidewalk and to their surprise, a light illuminated on their side, a wheel screeching on the road, and a loud honk can be heard. The two looked on their side and see their life, flashed between their eyes.Bookmark here

The two soon realized that they got hit by a truck. The impact was so strong that they both lost consciousness. Thinking that their lives would end this way is tragic, being killed by a truck hitting them.Bookmark here

As Iida opened his eyes, he only hears the faint voices of Nakano’s friends in a panic, he looked down and see a pool of blood and the ringing pain in his head. He remembers that Nakano was also with him, he panically looked for Nakano.Bookmark here

To his shock and despair, he saw Nakano’s lifeless body a little far away from him, Iida tries to crawl to her, knowing that he’s about to die. He doesn’t want to die alone, he wanted to grasp at Nakano’s hands. Since this was too abrupt, he deeply regretted taking a long time to accept her feelings.Bookmark here

‘I’m sorry Nakano, I deeply sorry’ He thought while crawling closer to her ‘I don’t want this feeling to die, I want to live with you in another life’Bookmark here

As his vision started to get blurry, he reaches out his hand into her hand. Then his body doesn’t move anymore, he just accepts that he’s about to die. But he looked at Nakano’s face and she’s still smiling till her death. It made Iida’s heart calmed down as he slowly closed his eyes. The sad thing is the fact that…Bookmark here

He didn’t know if he actually touched Nakano’s hand from his dying breath.Bookmark here

Don’t worry, he actually did touch her hand, what a tragic end indeed. Oh, I’m sorry for the sudden change of perspective. You may ask who’s perspective is this? Why don’t you guess? I was on my knees seeing the event happened in front of my eyes, seeing two lovebirds on their usual shenanigans, and for it to end like this breaks my heart.Bookmark here

At least to me, I guess, but not this little rascal that I have. You see, I didn’t sign up for this job, but at this time, I didn’t know that I have to run against people on the streets with a big ass truck. Yes, I’m the truck driver that ran over those two. I was expecting to be a truck driver for delivering the parcel to the receiver, I was shocked that I actually committed a crime, then soon I realized what the actual job is…Bookmark here

My name is Fujimoto Ryuji, and this little rascal that has an angel robe with an unusual pair of wings on her back is Seraphina. And I’m the driver, for the infamous Truck-kun.Bookmark here 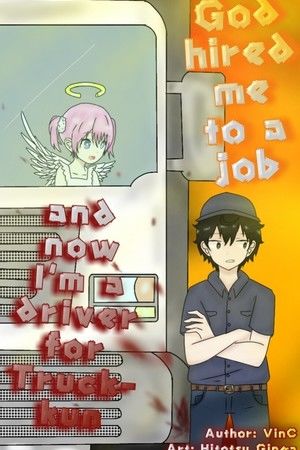