I Blissfully Die a Painful Death Crushed by the Crushing Weight of a Bazzilion Catgirl Pillows, Yet All is Not Lost, Because My Love For Catgirls is Eternal!

I Die Crushed by Catgirl Pillows, Yet My Total And All-Consuming Love for Catgirls was Rewarded and I am Reborn In Another World, as a Princess! Then I Find Out My New World Has Catgirls, So I Will Aim to Create a Harem With All the Catgirls in The World!

There sure are a lot of ways to die.

I doubt the way I died is something that many people could replicate, nor do I think it is something anyone would wish to experience. Death was, after all, death, no matter the method.

Soft. Kind of squishy. It felt like I was being crushed by a mountain of pillows.

Probably because I actually was being crushed by a mountain of pillows.

You’d think pillows wouldn’t be heavy enough to crush someone.

Which is why you need some backstory that’s not actually going to matter to the rest of this story anyway… Yet, it was, of course, the most important part of the whole thing. It was how I died. If me dying wasn’t important, why would I take the time to talk about it? That, in itself, was proof my death was the very most important of all deaths.

I was a bit of a collector, you see. Gathered up a bit of everything. Anime, manga, games, figurines, … And then there was, of course, the body pillows. All of them adorned by beautiful catgirls.

By the way, all the figurines I owned, all the hundreds of them… Were also catgirls.

My games? Catgirl dating sims. RPGs where you could get catgirls as a party member. Games where you did… Things I’d rather not mention… With catgirls.

Anime I had watched? Only, of course, ones with at least one catgirl character. Much the same for the manga.

Some would have called this an obsession, I am sure.

Personally I would call it a healthy hobby. The kind everyone would have been better off having.

It probably went without mentioning that the body pillows were also all… You guessed it. Catgirls.

I needed nothing else.

I even made sure to dress up as a catgirl myself as soon as I got home. Apparently some people frowned at that kind of thing being done in public, but nobody could stop me when I was just alone at home.

Which is why I put on a cute skirt, thigh high socks, a top that reached about halfway down my stomach …Well, none of those things really mattered. They’re not the important part.

The cat ears were. And the tail.

Anyway, you get the point. Let’s skip ahead.

That night, I fell asleep like usual, happily snoring away while surrounded by soft cotton catgirls. I had a mountain of catgirl pillows on either side of me, I was still dressed up as one myself, and was sleeping under sheets with an image of two catgirls hugging each other on them.

Doesn’t sound all that dangerous, maybe? They’re just pillows, is what I’m sure you’re thinking. Maybe they were stacked all the way to the ceiling and took up over half the space in the room, but they were still just pillows.

But these weren’t just your ordinary body pillows. They weren’t just a realistic height, the same as the character on them would have been, but also had a realistic smell, weight, even the way it felt to touch them… Everything.

And the weight was what did me in. Several dozen catgirls, all weighing somewhere between 45 and 75 kilograms, making for a total weight of over a metric ton. It was not something to be trifled with.

So I was crushed, and I died.

The next moment, I woke up in a totally unfamiliar room. It was huge. A huge hallway-like thing, except it wasn’t a hallway. It looked like the kind of room royalty would feel right at home in. There were even scrolls on the walls and a huge red carpet that stretched across the whole length of the room.

I was sitting on a small throne. There was a glistening silver tiara on my head, and I was wearing a way too fancy blue dress. For some reason I was also quite a bit shorter than in my past life. Felt kind of weird.

There was someone that looked suspiciously like a servant to my left, and a peasant was bowing real deep in front of me.

The peasant was speaking to me.

“Princess Viola, I thank you for your time. May I ask for permission to leave?”

I shouted emphatically, with almost as much passion in my voice as I had for catgirls.

The peasant seemed startled at my response. Didn’t expect that, apparently. Too bad.

“I… What more can you ask of me? I have already offered all I have in service of your family, my lady! I cannot give you any more, or my children will starve.”

I was pretty sure I had a good grasp of the situation. I died, but my love for catgirls was rewarded and I was reincarnated in another world.

In that case, there was only one thing that mattered.

“I-I will do anything you wish, Princess!”

The peasant bowed in gratitude several times over. Wouldn’t it have been a good idea to at least fully hear me out first? I could have asked for something really mean, you know. In fact I almost felt like doing that. But that would have been, you know… Mean. And people that loved catgirls weren’t mean unless it was for the sake of the catgirls.

“Catgirls! Answer me, peasant!”, I grabbed the peasant by the shoulders and shook them, “Tell me, peasanty peasant! Are there catgirls in this world?” 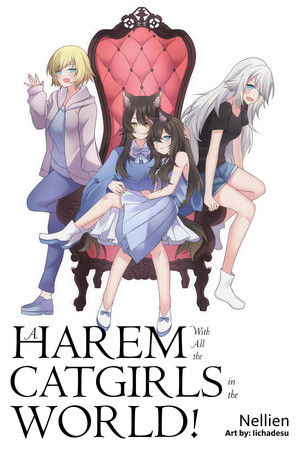 I Die Crushed by Catgirl Pillows, Yet My Total And All-Consuming Love for Catgirls was Rewarded and I am Reborn In Another World, as a Princess! Then I Find Out My New World Has Catgirls, So I Will Aim to Create a Harem With All the Catgirls in The World!