Purgatory, also known as the alternate world of planet Earth, is an unknown space somewhere in the depths of the living world, and is the entrance of the two separated worlds, where godlike beings have inhabited, which is beyond the reach of all mortals. The only way for a being on Earth to enter that mysterious place is only through... The Bermuda Triangle. Whenever natural disaster strikes the living world and endanger many of its lives, this means that some major event has taken place between and/or at the two worlds.Bookmark here

Most of the mortals cannot go, even if they wanted to and for those who successfully enter... will never come back. No one knew the reason why, but the harsh environment at the exit is so treacherous that even the godlike beings who try to approach it will perish. No mortal has ever set foot to this place as it did not even exist for them in the first place and only treated them as legends or myths from the olden times. They may not know this, but the two worlds are always and forever have intermingled with them.Bookmark here

'Elysium', also known as Heaven, is where all the 'Gotts' gather.Bookmark here

'Gehenna' on the other hand, also known as Hell, is where all the 'Daemons' gather.Bookmark here

Gotts grant the mortals of their minor desires as well as good luck. They gain more power whenever the mortals experience happiness. They receive more power when mortals worship them or strongly believe in them. After a mortal's death, they purify the souls of their mortal sins to be reincarnated. If not reincarnation, a few of the chosen ones will be sent to Elysium and be one of them while…Bookmark here

Daemons feed themselves of the mortals’ negative emotions to gain power. It also helps remove the impurity out of the soul in order to receive stronger negative emotions next time, but each individual does not feed themselves with random emotions as they have their own mortal connected to them, unlike the Gotts for it is impossible for the Daemons to have believers or someone to rely on. But when they do, it's a different story. The further a mortal’s heart sinks into darkness, the stronger the powers of a Daemon becomes.Bookmark here

For millions of years, the Daemons and Gotts have fought and attacked each other's territories without end to expand their own and... Out of hatred. They may even have already forgotten the cause of their hatred with each other, but the blood thirst for vengeance continues to prevent them from ceasing this never-ending war.Bookmark here

An army of Gotts were approaching a place called the 'Bermuda Triangle Trash Site' which was located west of Gehenna where all the sunken ships, airplanes, and any other trash that fell from the Bermuda Triangle on Earth would plummet in the said location without a doubt. In the central region of the pile of trash, the Gotts continued to march fiercely towards the Daemons who were currently on patrol.Bookmark here

Daemon 1 spotted a group of Gotts that were headed towards their way and shouted, "The Gotts are here again! Defend the area!" the Daemons behind him all screamed in unison and readied for a fearsome battle.Bookmark here

Gott 1, who was in front of the Gott army, also found the group of patrolling Daemons and yelled, "Daemons, spotted. Kill them all!" All the Gotts following screamed in unison and followed his lead to conquer the trash site.Bookmark here

Both troops clashed their blades against the other as they all met in the middle of the battlefield. Whilst the two sides struggled to bring down the other with all their might, “Why are you Gotts always coming here attacking us, anyway? Are you all masochists or what?!” Daemon 2 asked the foe in front of him irritated.Bookmark here

“Shut up you vile beasts! You’ll rue the day you messed with my family decades ago!”, the Gott yelled enraged.Bookmark here

“I’ve never left Gehenna! Nor have I seen your face once in my entire lifetime!”, the Daemon denied.Bookmark here

"Just shut up..." Gott 2 stabbed Daemon 2 by the stomach with a glowing knife using his left hand. "...and die!" Gott 2 finished his statement while Daemon 2 collapsed, body frail, and turned to ash, blown away like mere dust in the hot wind.Bookmark here

Daemon 3 turned pale as he saw one of his comrades killed right in front of him. He screamed at the top of his lungs as the pain in his heart swallowed him like a fire engulfing a trail of burnt remains, "F*ck!" He reached for his back pocket, He gripped a sharpened shuriken, coated the weapon with an intense black aura, and threw it towards Gott 2. A black slash hits the back of Gott 2 as he writhed in pain. “You’ll pay for the spilt blood of my brethren…with your life.” Daemon 3 mumbled under his breath, eyes filled with bloodlust.Bookmark here

As the Daemons' numbers began to slowly decrease, Daemon 4 quickly ran away from the battlefield in fear and cold sweat while his hands trembled in fear, calling someone in a panic manner from his iSkull, which is a communication device used by every Daemon from all over Gehenna. You may know them as an iPhone for humans if none or some may have not noticed it yet.Bookmark here

"Sir, the front lines will almost be broken through by the Gotts. We need backu--", Daemon 4 reported hastily in a shaky voice but before he could finish his sentence, Gott 3 shot him from the back with a white orb. His body collapsed to the ground similar to his fallen comrades and became ash as if he never existed.Bookmark here

I’m not going to let you escape that easily! Gott 3, filled with rage, said after the Daemon he shot had decreased to ash. “These lowlifes are nearly finished! Keep pushing through and leave not a single strand of hair! Justice always prevails!” Gott 4 yelled as he raised the Elysium flag for everyone in the battlefield to witness the victory they declared.Bookmark here

All the Gotts followed his lead and yelled in unison as they vigorously continued their invasion of Gehenna. Surely, every Gott soldier had thought that just a few more Daemons to slay and they could finally invade the enemy's territory without anyone getting their way. They could all avenge their loved ones that they had lost due to the Daemon army destroying their home before. This train of thought made them even more fired up despite all the bruises and fatigue from the many hours of fighting that had already taken over their body.Bookmark here

Gott 5 cut Daemon 5's head off from his body with a white slash from his short sword and turned to ash before the head could even touch the ground, "This is for my friend you killed nine years ago!"Bookmark here

Gott 6 smashed Daemon 6 with a glowing white spike ball and the Daemon turned to ash as the enemy's weapon hit him, "This is for destroying my hometown four decades ago!"Bookmark here

Gott 7 raised his glowing white axe in mid-air with Daemon 7 lying on the ground, trembling in fear as he was made aware of his inevitable death, “This is for brutally killing my innocent baby months and months ago!” Gott 7 said intensely as he reminisced a flashing image of his pet rabbit. As he was about to hit Daemon 7, a black slash suddenly came out of nowhere, cut his head off, and his body turned reduced to white particles.Bookmark here

Something swiftly passed through all the remaining thirteen Gotts who were in the area and in a blink of an eye, all Gotts were beheaded and turned to light particles in an instant.Bookmark here

A young lad, who had golden eyes with his pupils as sharp and as thin as a needle, his hair as black as the night sky and a fluffy pair of cat ears on his head gently being swayed by the wind, accompanied with his black tail on his lower back, and had crimson red whisker marks on both side of his cheeks like freshly spilt blood on a battlefield, was standing in front of what used to be Gotts were now light particles, placing his katana to his black scabbard that was loosely tied atop his back. His name is Natsu, one of the four captains of the patrolling Daemons.Bookmark here

“Apologies for the late arrival. Any more invading Gotts waiting to be slain?", Natsu said with a gentle voice and smiling warmly.Bookmark here

One of the four surviving Daemons screamed as he cried with joy and snot started to drip from his nose, "Captain Natsu is here!"Bookmark here

The second surviving Daemon followed while wearing a big smile on his face, "We're saved!"Bookmark here

The third surviving Daemon yelled on top of his lungs, "Thank you so much!"Bookmark here

The fourth surviving Daemon mumbled in relief with his voice almost inaudible with all his comrades screaming with joy, "I pissed my pants a little..."Bookmark here

The three noisy Daemons all stopped screaming and all complained in unison, "Oi!"Bookmark here

Daemon 7 wiped his tears, quickly went to his captain, saluted as a sign of respect, and reported, "Sir! There are more Gotts that are headed towards Florida City. We apologize for our incompetence!"Bookmark here

“No need to be sorry. We captains are partly at fault for not arriving sooner in the first place”, Natsu replied calmly.Bookmark here

Daemon 8, who was the second Daemon survivor, added in cold sweat, "What should we do, Sir Natsu? We won't be able to make it in time even if we chase them now."Bookmark here

"Don't worry about it. I said, 'we captains' earlier, haven't I?"Bookmark here

Somewhere in Florida City, USA District, two young lads were shown in a distance, standing victorious on their battlefield with a mass number of white particles surrounding them. Bookmark here

A lad complained with his clenching mouth only shown, "That Boss sure is a pain in the neck. Here we are getting our asses kicked and he was just chilling in the base."Bookmark here

One lad, who was shown to have black hair with white highlights around his bangs, eyes colored red, pupils accented with colors of blue and dark red, like a rarely seen red moon in the spotlight of a clear midnight blue sky., a pair of black bull ears on his head with his right ear decorated with two small round golden earrings, a black bull's tail, a tear tattoo as blue as the ocean on his right cheek, and tanned skin, is Raaz, one of the four captains together with Natsu. "I was in the middle of reading my book before being rudely interrupted when I was getting to the good part!”Bookmark here

While the second lad, who had chocolate and lavender gradient-colored hair, his eyes were dark sky blue with his sharp pupils glowing red, a pair of fluffy chocolate brown dog ears on his head, lavender-colored whisker marks on both side of his cheeks, and a sharp canine, is Eryl. “He’ll surely be pissed at you if he hears that”, the third captain together with Raaz and Natsu, replied in a monotone voice.Bookmark here 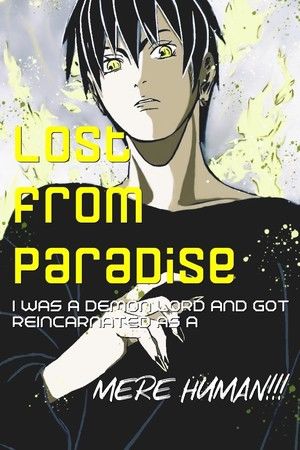