After practicing for the rest of the afternoon, we all went home. Whilst laying down on my bed, Umi's request for a salary advance finally came through my email. I read the particularly short but straight-to-the-point letter she had written and accepted it. I sent her the money right away.Bookmark here

The next day of work started and I spent an hour with the girls before heading to the building where Umi had her studio. There was a huge screen right next to the entrance advertising which units were available to rent. Coincidentally, the unit next to Umi's was available. It wasn't that expensive—which I had already imagined since my low salary was enough for Umi.Bookmark here

A bit hesitant, I selected the unit and rented it. I had fewer and fewer savings as the days passed and the expenses were far from over, but I knew they were worth it.Bookmark here

I headed to the unit and already was able to unlock it by simply grabbing the handle. It was completely empty. There only was a bathroom and a small room, just like in Umi's, except for the wall with the wide window and the room behind it; they probably were added by Umi.Bookmark here

I planned the small room to be used as a dressing room, whilst the big main room was going to be left untouched. Only the floor had to be changed and a huge mirror to be added.Bookmark here

I spent a few more minutes planning before I walked out of the building. On the way back, I checked a few more locations for the girls to perform at. Once I arrived, I told the girls about the new studio. However, it was going to take a few days to get it prepared. I didn't even know where to find people that made dance studios. I researched it whilst the girls practiced and worked on the second song.Bookmark here

After a few hours, I finally felt confident about my findings. I called the three companies I had found and told them what I wanted. The three of them were convincing, but I had to choose the cheapest one if I wanted my savings to survive long enough. They told me they were going to start the next day.Bookmark here

Throughout the afternoon, I kept looking for more businesses for the girls to perform at. They were getting quite far, so I used the map instead of walking there. I found a few more, small enough locations in Saitama District and decided to also look in the Trading District.Bookmark here

The day ended and the next one started. Jun asked me stuff about the group and sent me sketches for both the animation and the logo. I made a few suggestions and he assured me it was going to be done for the next day.Bookmark here

It was time for the company I had hired to come to the unit, so I headed there as well. They arrived quite a bit later than planned. I knew there were going to be problems since I had hired the cheapest one, but I was willing to overcome them.Bookmark here

They got to work and made a lot of progress in the six hours they stayed there. It was quite boring for me, but chatting with them was pleasing. I also answered more questions for Jun and he sent the nearly completed sketches; they were awesome.Bookmark here

The four people that came to the unit finished their work for the day and left. They assured me it was going to be complete in three days as they had already told me.Bookmark here

There was still one hour left of work, so I headed back with the girls at the current dance studio. They had finished working on both the song and its choreography, so they showed them to me.Bookmark here

The song was a lot calmer and more relaxing than the first one: a ballad. It talked about impossible love and the demise of a relationship, but it also told the sparkling light after the darkness. It was called Sparkling Before After.Bookmark here

Even though it was slow, there still were quite a few instruments in a couple of fast segments. The girls managed to come up with a perfectly fitting choreography, which I found astounding because, just by hearing the song, I supposed it was going to be hard. The movements matched both the slow and fast segments and they added even more depth to the already emotion-packed song.Bookmark here

I clapped after seeing the performance and they all seemed very happy. The only thing left to do for the song was to record the singing. Since Umi had solved her rent situation—for now—we decided to go there to record the next day.Bookmark here

Like every evening, Professor Fuku and I walked together; we still had things to talk about. However, the opposite of what I expected to happen happened. I expected myself to fall in love with her even further; instead, I felt more and more troubled about her and Aki. The flames of my love for Professor Fuku were slowly dying out instead of blazing. I didn't want that to happen. I didn't want to give up.Bookmark here

After a sleepless night, the next day started with Jun sending me the animation and the logo. I sent him the second half of his pay and headed out after a few hours of playing games. Sanae and Risa were waiting for me in front of the apartment buildings then we walked together to the recording studio.Bookmark here

Aki and Umi were already there when we arrived. Aki played around with the drums, whilst Umi was doing something on her glasses.Bookmark here

She could at least try to fake some concern. Maybe Astra's lost; I should call her.Bookmark here

I put my glasses on. About to call Astra, someone rang the bell. Umi opened the door and Astra was standing in front, panting and sweating.Bookmark here

"Sorry! I'm really sorry!" she bowed. "I arrived late because I was lost!"Bookmark here

I was right. Even when maps are incredible these days, people can still get lost if they have a bad sense of direction.Bookmark here

After giggling, she stepped inside and sat on the floor, still half dead. She then noticed the dozens of instruments in the room, startling her.Bookmark here

"Now that everyone's here, let me show you the group's logo and the animation," I continued.Bookmark here

I requested their glasses for permission to send images. They all accepted and the logo appeared in front of their eyes. It was a cherry blossom flower with the shape of a star. It had another star in the center and the contour had outlines of different colors. The name of the group was beneath it.Bookmark here

"I love it!" Astra added, still sitting on the floor.Bookmark here

"Now I'll send you the animation," I continued.Bookmark here

Whilst the five-second animation played on their glasses, their mouths remained opened. It gave a magical yet galactical feeling. Appearing from outside the image, each of the girls struck a pose and moved to the center, where they stood next to each other. Then the cherry blossom star came blazing from the side, leaving a gold trail behind. It stopped beneath them and beamed to make the Blostars word appear.Bookmark here

"I must admit it was good," Umi added.Bookmark here

"I love it too!" Astra beamed. "But why are we standing in that order?"Bookmark here

"I was curious about that as well," Aki added.Bookmark here

Once they all appeared in the animation and stood to each other, they did it in a certain order. From left to right: Astra, Risa, Sanae, Aki, and Umi.Bookmark here

"Jun asked me about it, but I didn't know either. So he chose the order he felt was the best," I answered.Bookmark here

"I see," Aki replied. "It's true that it feels right, so I'm not complaining."Bookmark here

After discussing a bit more about the logo and the animation, the girls started recording their vocals. It took more time than I anticipated. The song needed such detail and delicacy that it took them multiple takes to get it just right.Bookmark here

They were done a couple of hours later, just in time for me to leave to supervise the company preparing the dance studio in the neighboring unit. By their request, I let the girls take a peek at it; they were thrilled to see how much more space there was compared to the current studio. Then they left.Bookmark here

I stayed to supervise the remodeling. They finished later than the previous day, but it was practically done. They only needed one more day.Bookmark here 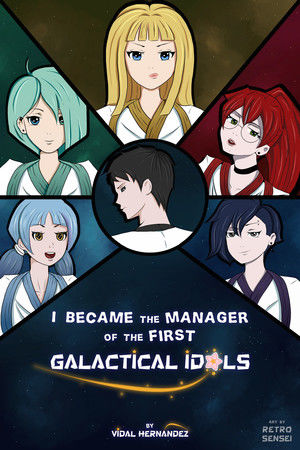