Why is this happening to me

Taro's face hits the rough gravel beneath him as the crowd starts kicking him. Tears flowing down his face only to soon merge with blood. He's trying to call for help but his body won't let him.
Why is this happening to me? What did I do to deserve this?
His classmates continue attacking him with no sign of ever stopping. This isn't the first time this has happened either. These bullies liked picking on him and his friends, but Taro appeared to be the main target for their attacks. Although he didn't know why. Maybe it's because he always sits at the back of every class, minding his own business and trying to learn, It could be because he enjoys typically nerdy things like chess and reading or it could be because he doesn't fight back making him an easy target for assaults.Bookmark here

The attacks finally stop and as a final cherry on top, the biggest of his classmates, Daisuke, spits on him. This, however, is the least of his worries. His wounds are bad, and he knows that if they're not treated it could kill him.
"He didn't put up a fight again."
"You can't seriously tell me you think he can defend himself?" The monsters gossip among themselves.
"He...lp m...e" Taro mutters to nobody. He knows that nobody will come to his rescue. Nobody is there for him. Absolutely nobody...Bookmark here

Do not fret my child, I am here for you.Bookmark here

Taro hears a voice speak as he uncovers his head, everyone who was once around him had suddenly disappeared. The pain he had felt just moments prior had suddenly vanished as if nothing had ever happened to him in the first place. Tears of bliss filled his eyes, he had been hurt by those around him for so long that it felt good to have someone, or something care for him and protect him.
"Who are you?" He spoke out into the emptiness as he got up off of the rough ground and dusted himself off. He was half expecting to not get a response, he thought that he was going crazy from the amount of blood that he had lost.Bookmark here

I am your guardian angel, I will protect you from here on out.Bookmark here

This statement stunned Taro, freezing him in place. If this was real it was certainly bizarre, Taro wanted to believe this so badly but after everything that had happened, it could just be another kid messing with him. Taro hung his head and began sobbing.
"This is too good to be true" He muttered to himself, his hands grasping his face, attempting to hide the tears.
"This can't be real, I don't believe it." Hands reached around Taro's body, holding him in an embrace and he suddenly stopped questioning everything.Bookmark here

It is okay to believe this is not real, I do not blame you after everything that had happened to you.Bookmark here

Taro sniffles and wipes away his tears. The warmth of his guardian angel put him to ease. The knowledge that someone was there for him was enough to put a smile on his face.
"Thank you. Thank you so much." Taro wept, although, in the back of his mind, he knew something wasn't right, there had to be a catch.
"I'm sorry but I have to know, who are you?"Bookmark here

My name is Kami, your guardian angel and I am also technically a god.Bookmark here

This took Taro by surprise, what did he do to warrant protection from a god. Taro shakes his head in disbelief, knowing that there is now something serious going on. He had to know as soon as he could.
"Kami... What's the catch, someone like me doesn't get protection from a god for nothing." Kami sighs as Taro speaks the words that they had been fearing.
Bookmark here

I suppose it was inevitable that you would question that.Bookmark here

I can only support you from 12 PM to 12 AM.Bookmark here 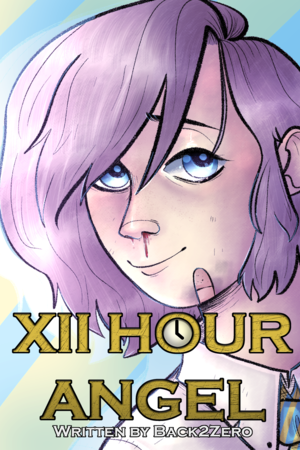