Ayame let out a strangled gasp, staring up at the tall, messy-haired boy from where she was curled up on the front porch, her heart dropping.Bookmark here

Kuroo was just as shocked to see her, his eyes bulging out. As he took note of her wounded form, worry crashed over him. He froze at first, before snapping out of his horrified stupor. The boy was quick to act, rushing to her side, crouching and hoisting her into his arms. He hurried to bring her inside, kicking the front door shut behind him.Bookmark here

“Kenma! It's Ayame, and she's hurt! What do we do?! Call an ambulance?!” Bookmark here

The girl furiously shook her head in protest, not even noticing what he had called her.Bookmark here

“But you’re hurt! Aya-chan, what happened to you?! I’m gonna-!“ Bookmark here

“Ayame!” Kenma gasped, rushing downstairs faster than Kuroo had ever recalled him moving. His normally stoic expression had morphed into one of shock and concern.Bookmark here

"What should we do?!"Bookmark here

“Put her on the couch!" Kenma hastily instructed, running off to the kitchen to grab the first-aid kit and ice. Bookmark here

Kuroo did as told, gently placing Ayame onto the couch, though a groan tumbled from her lips. She coughed, curling up and clutching at her stomach. This freaked Kuroo out further, who dropped to his knees before her. Bookmark here

"What's wrong?! Does it hurt there?! Did I hurt you worse?! How'd this happen?!" He pummeled her with questions, making her overwhelmed beyond belief. Bookmark here

"Kuroo-san, lay off for a second." Kenma pushed him aside, gingerly helping her to sit up. Ayame groaned, clutching at his shoulders. Kuroo silently watched from afar, scooting to the other side of the coffee table. Bookmark here

"Where does it hurt the most?" Kenma gently coaxed.Bookmark here

She placed a hand to her stomach and to her neck, where pale bruises in the shapes of fingers begun to develop. Kenma exhaled shakily, nodding. Bookmark here

The blonde girl slowly lifted her head to meet his gaze, her eyes reddened and swollen from crying. Kenma softly brushed away the tears, cupping her face in his hands. She stared up at him, more tears welling up in her eyes. Kuroo watched the exchange, awed by how close the two were, though he was more concerned by how she had come to look like this. Bookmark here

"She can't hurt you here, you're safe now..." Kenma's voice was soft, almost whispering. "But you'll have to tell him, now that he's seen you like this..."Bookmark here

The girl's head lowered again, her eyes closing, though tears rolled down her cheeks.Bookmark here

Kuroo stiffened, feeling confused, conflicted, but most of all, upset.Bookmark here

Who was "she?" Was "she" the reason Ayame was left in such pain and distress?Bookmark here

He felt his chest tighten, but tried to ignore it.Bookmark here

Kenma let go of her cheeks, handing her the ice pack, before opening the first-aid kit. Pouring alcohol onto a cotton ball, he dabbed it over the scratches her mother's nails had left on her neck. Ayame grit her teeth, hissing at the sting. He then bandaged them up.Bookmark here

"I’ll be right back, I'm getting you something to hide the bruises." He pulled away, getting to his feet. "You can stay over again, you know my parents won't mind."Bookmark here

Ayame nodded, watching as he headed upstairs to grab her some spare clothes.Bookmark here

"There's more?" Kuroo thought, inching closer. He stopped right in front of the girl, sat on the wooden floor and studying her pained expression. Ayame rubbed her eyes, sniffling as she nervously averted her gaze. Bookmark here

Kuroo finally spoke up again, his eyes empty of malice. There was only worry.Bookmark here

"What happened? Who did this to you? His questions were quiet and laced with concern.Bookmark here

"My mother, she was hungover..." The girl began to speak in a shaky voice, with Kuroo listening intently. "She became angry and attacked me...pinned me to the ground by the throat... yelled horrible things about me..."Bookmark here

"Then she kicked me in the stomach, but I-I managed to escape, and ran h-here..." Her voice finally cracked. Kuroo bit his lip.Bookmark here

"How long have you been dealing with this?"Bookmark here

"It's been happening for years, since I was five...or that's the earliest I remember..."Bookmark here

The girl froze- she didn't think he had caught that.Bookmark here

Staring down at her lap, she slowly pushed up her sleeves. Her arms were covered in purple, blue, and even yellow spots, hidden beneath the simple white fabric. Kuroo's eyes widened at the sight as he let out a small gasp. His hand reached towards the girl, but she flinched.Bookmark here

"Sorry!" He was quick to pull away. Bookmark here

Ayame tugged her sleeves back down, fiddling with her fingers. Kuroo sighed.Bookmark here

"Have you ever gone to the cops with this?" He changed the subject.Bookmark here

She nodded, leaning back against the couch and hugging her knees.Bookmark here

"A long time ago...I told them my mommy hit me, but they said I just couldn't understand discipline..." Her eyes were downcast.Bookmark here

"That's awful..." Kuroo frowned, his hands balling into fists. "They just brushed you off like that?!"Bookmark here

"Yeah. I can't believe I'm telling you all this..." She muttered, shaking her head. "Thought you would've been the last one to find out..."Bookmark here

Kenma stood at the top of the stairs with the clothes in his arms, listening to the two talk. It was the first time they had ever had a heart-to-heart, on such a serious subject no less. As silence filled the house, Kenma finally began walking downstairs. Bookmark here

"You can come change now. I'll help you if you need it." He told her, though this was also so he could treat any wounds she was hiding from Kuroo.Bookmark here

"Okay..." Ayame agreed, groaning lowly as he helped her off the couch, leaning against his side for support. Kenma steadied the girl, leading her upstairs. Kuroo noticed that Kenma had grabbed the first-aid kit on the way out of the room. He frowned slightly.Bookmark here

Inside the guest bedroom, Ayame sat atop of the bed, slowly unbuttoning and pulling off her blouse. Kenma sat next to the girl as she turned to show him her other injuries. He winced at the sight of the bruise forming on her stomach, before helping to treat her. She hissed slightly at his touch.Bookmark here

As Kenma patched her up, Kuroo made his way upstairs, morbid curiosity getting the best of him. Cracking the door open just slightly, he peeked inside, noticing the bruises covering Ayame's body. His eyes widened as she turned to show Kenma her back. Bookmark here

“I'm sorry I wasn't able to help you when that happened...” He murmured, averting his gaze.Bookmark here

“We didn't even know each other back then, so don't be sorry." She told him. "Look- they're finally starting to fade.” Bookmark here

Her back was littered with large vertical scars, their intensity shocking Kuroo. More questions burned in his mind, but he knew it wasn't his place to ask. Pushing the thoughts aside, he quickly went back downstairs, pretending like he saw nothing. Bookmark here

Eventually, Kenma returned to the living room, sitting next to Kuroo on the couch. The two sat in silence, leaning against each other's shoulder. Bookmark here

Upstairs in the guest bedroom, Ayame was left alone and terrified- she had vowed to not let anyone else find out about her home life, and now one more person knew. Not just anyone though- Kuroo Tetsuro himself.Bookmark here

She groaned into a pillow, her mind racing with worst-case scenarios. Would he say something to someone? Would he use it against her? What if he thought she was pathetic?Bookmark here

A soft knock came at the door.Bookmark here

Quickly sitting up, Ayame sniffled, rubbing away any stray tears as an older woman entered the room. She was rather short and slim, still wearing a dress from date night with her husband. Her hair was straight, black, and shoulder length. Her eyes were the same as her son's- catlike and a piercing golden color. She smiled at the girl, sitting on the bed and reaching out to stroke her hair.Bookmark here

“I made you something to eat, dear. It’s nothing fancy, but I thought you might be hungry.” Ayame leaned into her touch, nodding before getting out of bed. Bookmark here

"Goodnight..." The blonde nods, watching Kenma's mother go into her room, her husband most likely already inside. Bookmark here

Fidgeting with the hem of the sweater Kenma had let her borrow, she walked downstairs, holding up her sweatpants, which hung loosely around her hips as she moved.Bookmark here

At the bottom of the stairs, Ayame could hear someone yelling about being blue-shelled. She stopped in the living room, watching the pair playing Mario Kart together. Kuroo was standing up, aggressively turning his wii steering wheel as Waluigi dropped down to 5th place. She quietly snorted when Kenma’s side of the screen displayed Princess Daisy and a big "1st place" announcement. Bookmark here

“Kenma, you cheated!” The bed-headed boy accused, not even noticing Ayame behind them.Bookmark here

He stuck his tongue out at Kuroo before giving him the hard truth. Bookmark here

“I did not. You’re just bad at this.” Bookmark here

Trying to hide her laugh, Ayame covered her mouth, but failed.Bookmark here

“Aya-chan, did you see that?!” Kuroo's attention shot to her. Bookmark here

“It was so stupid." The girl finally let out a genuine laugh. "Also Waluigi, really? He clearly beat you, rooster.”Bookmark here

Kuroo seemed stunned by the sound of her laughter. Kenma kicked him in the shin.Bookmark here

Ayame shook her head at the duo, going into the kitchen. A sandwich sat on the counter, a glass of milk next to the plate.Bookmark here

Her stomach growled at the sight.Bookmark here

Grabbing the sandwich, she bit into it, savoring the taste and mentally thanking the woman before downing the glass. Finishing her snack, she wiped any crumbs or milk from her lips with the back of her hand.Bookmark here

Putting the dishes into the sink, she checked the time on the clock above the stove. It was nearly midnight.Bookmark here

Her body dragged itself out the kitchen, past the living room. Kenma noticed and called out to her, Kuroo doing the same. Bookmark here

She waved them off, trudging back upstairs. Slipping into the guest room, she crawled beneath the covers, closing her eyes to finally rest. Bookmark here

Hopefully, she wouldn't be so sore in the morning.Bookmark here 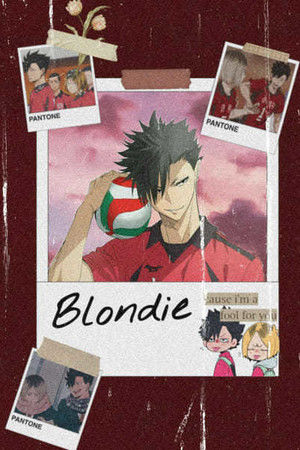