Sakura dragged the school nurse’s stool over and popped her bag down. Kaito coughed loudly but kept sleeping.

“Sakura-chan! What are you doing here? Oh wait, I should introduce the two of you officially! Since Haruko bailed on the after party last time…”

“Kitamura-senpai huh? I’ve heard quite a bit about you.”

“R-really? Why? Do people talk about me?”

There was an awkward silence before Haruko cleared her throat loudly, realizing why.

“Well yes but don’t worry too much about it. Everyone’s much too scared to bring it up. Except…”

“Except for me of course! I’ve come here today to ask the two of you for help.”

“Yes. I want to look into Kitamura-san’s suicide. I’m sure the school is hiding something.”

Kaito suddenly sat straight up in his bed and tossed away the cold towel that was resting on his head. He looked terrible, his skin was as white as a sheet of paper and his hair was all out of place. This being said, his eyes were fierce as he grabbed his little shoulder by the shoulders.

“Omori Sakura-chan. Drop this immediately. I’ve told you, Kitamura’s death is not your plaything. It’s not study material for your novels.”

With this, Kaito snatched the pen pad out of Sakura’s hands. Sakura stood up violently.

“Brother, you don’t understand. Kitamura’s death wasn’t just any random accident. It was a suicide. That’s why the school-”

Itsuki and Haruko sat, panicked. Itsuki tried to calm the two down.

Sakura frowned and turned her head away as Kaito rested his head in his hands, stressed.

As she stepped out of the infirmary, she could hear Itsuki whisper a few words but all she could hear was “should we tell her?” Haruko looked at her flip phone. Today was still June 1st. Today, the Astronomy Club went on strike. Tomorrow, June 2nd, the book told of a boy named Kiyoshi who bragged about how well he did on EIKEN. On June 3rd, Shun would supposedly get in an accident, costing him his life. Haruko felt an ominous feeling in her chest as she raced down to the teacher’s office once again.

The math teacher looked up.

“Kiyoshi-sensei? He just left. You can try and find him in the parking lot…”

Haruko bowed quickly and raced outside. Sure enough, Kiyoshi-sensei was loading his car in with files.

Kiyoshi-sensei slammed down the trunk of his car before placing both hands in his pocket and nodding towards Haruko, saying “go on.”

“Uh this… I’m not sure how to ask this but.. Kiyoshi-sensei you took the EIKEN right?”

“Eiken! ‘Course I did! There aren’t many students who don’t take it nowadays.”

“Sure did! In fact, I stayed up all night studying for it! Man, at that time, I wasn’t too good of a student. So, when I decided to study for once in my life, and scored a perfect mark, I bragged ‘bout it to all my friends! Haha, the look on their faces… even the teachers couldn’t believe it!”

Haruko’s legs felt weak. Still, this must’ve been a coincidence.

It was such a vague statement. Anyone could have had an experience like this. Haruko suddenly felt an incomprehensible urge to ask Kiyoshi-sensei more. She knew it was wrong to talk about it but she’d gone in too far to back away now.

“Kitamura Yulan. Did you know him?”

Kiyoshi-sensei’s face froze. His character broke but he quickly tried to cover it up.

“Sorry? Oh him? Ah yes, well he was a very good guy. Got good grades and was popular among the girls. Felt like he never had a thing to worry about. I remember he emit this type of aura, you know? There was a feeling of superiority around him. No one could read his expressions. He always had a mysterious expression on his face… he also carried this old book around. Said he was going to be an author. It was a diary type of thing. Never read it though… Oh yeah and he also had…. Many….. Uh Haruko-san? What’s the matter?”

Haruko’s face was filled with tears. She wiped them quickly and grit her teeth.

“I know. You can never tell what he’s thinking. He hides things from you, he makes it seem like his life is so simple… he never tells you anything about himself.”

Kiyoshi-sensei was frozen in place. Haruko kept talking. She knew what she was doing was wrong. But it was too late. It was too late for everything now.

“In the final year of High school. Kiyoshi-sensei, you met Kitamura-san at a park. You bragged about your score.”

“Today, I met Kiyoshi-kun at the park. Apparently, he stayed up all night studying for the EIKEN*. He was so confident, boasting about how his score must be a perfect 4.”

There was no answer.

“Then, Kitamura-san caught an eel behind the convenience store,”

Haruko was barely breathing through her tears but kept going.

“He c-, he caught an eel even though no one believed it was possible.”

“Today, I caught an eel behind the convenience store. The guys said there was no way I could catch it with my bare hands. When I caught it, the boys all cheered for me like we just won KOSHIEN*.”

Haruko suddenly stopped and stared at the floor, her eyes wide. She was too scared to look at her teacher’s face. He wasn’t saying anything. Haruko felt every nerve in her body telling her to get out of there. She started to run, as far as she could. The sound of the wind blocked all the noises. The sounds of the birds, the cars, the trains, the sound of her shoes hitting the ground. Haruko ran and ran until she collapsed on the sidewalk. She placed her hand on her face. Her mind went blank. She stayed on the sidewalk for at least an hour. An old lady walking her dog passed by and asked her if she was injured. A group of kids passed by and asked if she was feeling sick. A young couple walked by and asked if they wanted her to call someone. Then, the sun was replaced by the moon and the streets became deserted.

Haruko checked her watch. June 1st, 10:00pm. She stood up; her legs were all wobbly. As she turned around, she noticed a sign with a child holding a rubber ball. She had been sitting next to a park. Picking up her bag carefully, Haruko walked towards the big green dinosaur in the middle of the playground. She felt the cool plastic against her hand but suddenly threw up violently on the ground. She coughed loudly and knelt down. She threw up again, this time leaving blood all over her hands. Her body shook violently. She panicked and started to slam her chest with her hand, trying to make her body stop. The next moments were a blur, as Haruko started getting angry. She threw her school bag against the metal pole of the swings and punched the cement with her bare fists, making her knuckles bleed. She snickered loudly. Suddenly, the old flip phone rang. It was Yulan. Haruko looked at the screen through her blurry eyes and bit her lip so hard it started bleeding. Using both hands, she snapped the old flip phone in half. The light flickered for a second, the ringing made a strange noise and then stopped. Then, there was silence.

“I should pack my things.”

Haruko said quietly. She stood up gracefully, what a strange contrast from a second before. Picking up her bag and all the books that had fallen out, Haruko made her way out of the park when suddenly, Shun appeared before her. He was holding a grocery bag from a typical convenience store while gripping the handles of his bicycle.

“Haruko-san? What the? Are you stalking me now?”

Haruko was about to open her mouth before Shun interrupted her.

“And what’s all this? Why are your clothes so dirty? Whoa, did you beat someone up? Seriously? Look at that blood…”

Haruko scratched her head, annoyed and tried walking past him but he wouldn’t let her.

“Hey now. You aren’t even gonna say hi? Did you come here to see me?”

Haruko snapped her head back, this time she was pissed.

“Mister, I didn’t come here to see you. What the hell are you talking- ugh, about?”

“Well I live here. No one else in the class lives here do they? You used to come over to play all the time when we were little. Surprised you remember this place.”

Haruko looked around. She’d made her way to the rich neighbourhood. Only wealthy people lived around here. She pressed her hand against her head and walked out onto the street.

“You aren’t going back to that man are you? I’m telling you he’s really strange. You never know what he’s gonna do to you.”

Shun suddenly threw his bike to the ground and stood in the middle of the street, in front of Haruko.

“Come on. You can stay over at my place-”

Haruko yelled, slapping his hand away. Out of nowhere, Haruko saw two bright lights appear from behind Shun. It felt like time stopped, as she grabbed him and pushed him out of the way. A loud honk blared through the night air. Haruko closed her eyes as her body fell and the world went dark. 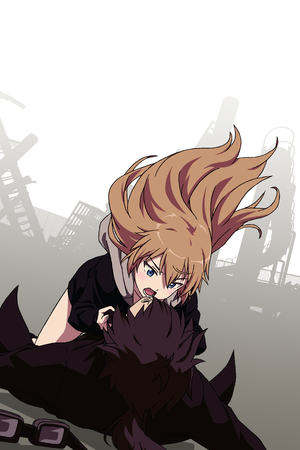