One of the first things you would notice when arriving in the 13th century is the quality of the air; there was no industrial pollution sending natural disaster levels of carbon into the atmosphere during that time, so if you were to take a deep breath, and then savor the fresh air, you would feel a huge difference in breathing satisfaction as compared to 2021.

Brendan - our protagonist who had now lifted himself off the ground, and was checking himself for injuries, was not able to have any breathing satisfaction because he was too scared of breathing deeply and getting poop particles into his nose (remember how he tragically fell into the poop).

After taking for a few minutes to sight see, and analyze the world around him,  Brendan Flannagan came up with a theory: he had dropped into an Isekai world, and it was medieval themed - like Genshin Impact or Konosuba (hopefully not Goblin Slayer he thought to himself).

While scouting the area before heading in one specific direction, he found himself next to a brown cow name Dobiechna (who he didn't know was named that), who was also the culprit that left him the gracious gift of feces that acted as a landing pad during the time warp. As a decently sized animal with brown fur and a small set of horns, Dobiechna had no fears of the odd looking human (this term applies to Brendan but it could also apply to myself, which is why I'm a writer and not an extrovert).  The animal lackadaisically glanced in the black American's direction, and thought:

"Don't you have anything better to do? "

And the answer to that was yes, he did have more important things to do, but he didn't know how to go about doing them.

While walking around aimlessly, trying to figure out what to do next, a critical thought popped into his noggin: the potential existence of the HUD system.

In shows like SAO, or in video games like Runescape, the main characters use a menu system in order to activate skills and enter quests. Usually this involves clicking through it on a mysterious box that appears in front of the HUD user, so out of sheer excitement, Brendan began tapping his forehead violently, because he wanted his HUD to pop up. When that didn't work, he began slamming the side of his skull like he was trying to give himself a brain injury (which might have happened because the attempt made him woozy).  But neither head method worked, so he stopped and tried other plans for HUD manifestation.

One method he tried was inspired by the time he went to see a magician for a childhood birthday party and peed his pants (maybe I didn't need to say that last part). He clapped his hands and yelled:

But after two minutes of waiting, nothing happened, so the magical code word was considered a failure and he moved on.

Brendan next tried to squeeze and twist his forearm, because he remembered the game bop it (a handheld device that you smack and grab), but the end result was just a huge rash and pulled up arm hairs instead of anything significant. He next tried to slap his stomach, but that just left a gross handprint.

The bop it method was declared unsuccessful as well.

Many more attempts to find a way to create a HUD were undergone by our protagonist, but nothing worked (because HUD's don't exist), so he gave up and covered his face in shame (on second look, it appears that he was just trying to pull out a booger, so he was not actually hiding his features on purpose).

After hearing Dobiechna moo, Brendan glanced in her direction, and then said this out loud (because smacking his head to force a HUD to appear gave him a headache, which made it too difficult to think clearly):

"This world does not have a HUD, so that means I have to do quests and items will appear directly in my hands instead of in a collapsible menu."

He scratched his butt forcefully, and then continued the speaking his thoughts:

"If I defeat this beast - I can gain experience, and  when I finally hit a new level, I could be rewarded with an item."

The dairy cow, who was now feeding on long grass and completely ignoring the delusional high school student, had no idea what was being planned behind her. Brendan was slowly creeping up towards her with, hands shaped into fists, ready to strike the beast's strongly built exterior.

His spoke again while shuffling towards the cow:

"I'm the chosen character that was dropped here from earth - so I must have special powers."

When he got within several feet, the 15 year old suddenly stopped and shouted:

"What the hell are you? A transgendered cow!?"

To which the cow replied:

Dobiechna was an ancient species of cattle, so modern farming methods hadn't bred here to look like a 21st century dairy cattle. She was a simple brown cow that had horns and an utter - perfectly normal given the era she existed in.

But Brendan, who was now on his knees, peeking at the cow's utter, couldn't believe what he was witnessing. He said to himself:

"The cow has horns, which means it must be a male. But since it has an utter, it must also be a female; therefore - I must be in an alternate universe. Only in an Isekai would an author self insert an LGBTQ cow."

Brendan quickly rushed towards the cow, thinking it was a low level beast that he could gain experience points from, and then got kicked in the ribs. He went flying backwards, and his Luffy shirt got partially torn at the spot of impact with the cow's hoof, and his pajama bottoms were ripped as he landed on a sizeable pointed stone during his fall. Brendan instantly felt a stinging pain in his chest, and then - before passing out, he said a few words which would have been quite the final words if he ended up dying:

"So this - this is the power of the gay community."

After going limp and entering a sleeplike state, Brendan wouldn't be found until two hours later, when Dobiechna's owner went outside to look for his animal. The farmer would only see Brendan's corpse like frame because the American's body smelled horrible, as it was covered in Dobiechna's feces and he didn't have any deodorant because he constantly forget to use it. 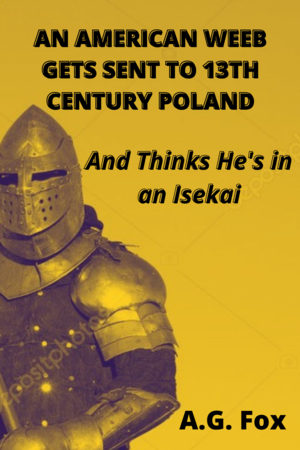